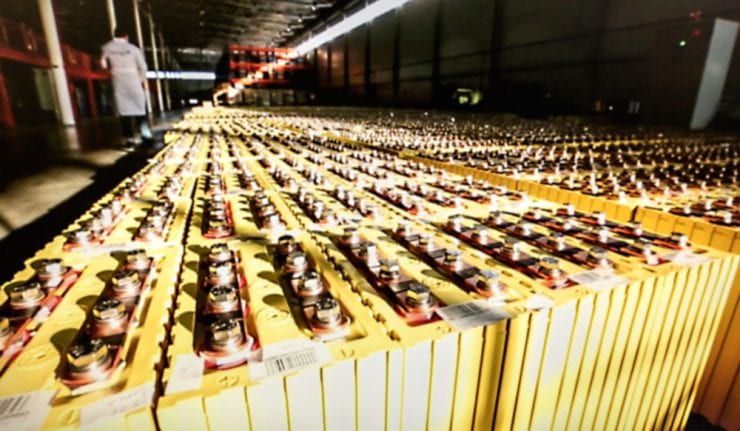 A year ago this week, I wrote about investing in lithium.

The title of the piece — “Should You Buy Into the Lithium Mania?” — hinted at my skepticism about the boom in lithium prices and lithium stocks.

I quoted Robert Friedland — well known in the mining community for speculative forays into the sector — who predicted: “The lithium market will end in tears.”

As it turns out, I was wrong — at least up to now.

Both lithium prices and lithium stocks have soared since then.

Sociedad Química y Minera de Chile S.A. (SQM) — the world’s largest producer of lithium –jumped over 75% in the past year.

My Momentum Trader Alert service picked up on SQM’s recent surge and I recommended the stock two weeks ago.

Insight from a Lithium Expert

I recently had a chance to revisit my thoughts on lithium after connecting with an expert: my old friend Howard Klein of RK Equity.

Howard was in London last weekend with his son visiting friends and colleagues.

Howard reminded me that I had introduced him to his wife at my annual Christmas party in 1994. Fast forward 23 years, and our kids are playing together in Holland Park in London.

Truth be told, I never dug into the weeds of lithium production.

But Howard has. And he is very bullish on the entire sector.

For the last two years, Howard has been recommending lithium-related stocks.

Exclusive  Shelter From the Storm... Made In Asia

Nine months ago, Howard launched a newsletter titled “Lithium Bull” which focuses on investments in the lithium space.

Howard just sent me the most recent issue. The letter is well written and entertaining. Howard peppers it with memorable anecdotes ranging from Tom Petty concerts to his favorite characters from “Sex in the City.”

Howard tops it all off with bullish insights on lithium by Elon Musk from a recent Tesla conference call.

Howard is less bullish on top lithium producers like SQM. He says the large-cap lithium stocks are “priced to perfection.”

As Howard puts it, “self‐directed speculators can make individual fortunes, if they choose wisely.”

The company was founded by proven resource entrepreneurs with the backing of Ian Middlemas’ Apollo Group out of Perth, Australia.

With two of the top five lithium producers in the U.S. located in Charlotte, North Carolina, Piedmont stands at ground zero for American lithium processing skills, facilities and know-how.

Howard expects a flurry of news flow about the company over the next few months. News of drill results, potential land acquisitions and even potential listing on the U.S. market could all drive the price higher.

How I Think about Investing in Microcap Stocks

If you’re like me, the potential upside of an undiscovered small cap stock always makes your pulse race faster.

I then take a step back…

Piedmont is currently listed in Australia and has a market cap of less than $50 million.

That means it barely meets the definition of a U.S. microcap stock.

There’s nothing wrong with that.

As an investor, just understand what you’re getting into.

I think of investing in microcap mining stocks as having a similar risk profile to Angel or early Venture Capital (VC) (“Series A”) investing.

As an early investor, you get a low valuation.

At the same time, the 10x and 100x returns lucky investors like are elusive.

Recall the textbook return profile for VC investments. Out of every ten investments, two or three will flop, and five or six will become the “living dead.” The remaining one or two make all the money. These cover the losses in the other investments.

How I View Investing in Lithium

I view investing in lithium the same way I view all investments: through the overall trend and risk management.

First, I see that lithium producers are trending upward. That alone argues for taking a position in your portfolio. The bigger question is how much to buy and when to exit if your position moves against you.

Second, I have to decide what role lithium will have in my portfolio.

Are lithium stocks just another asset class which can boost my portfolio’s returns at the margin?

Or do you want to bet big on a potentially enormous winner like Piedmont?

Do you want to be one of those self-directed investors who can potentially make significant personal fortunes?

Exclusive  Book a 55% Gain in Your Short Commodities Position

Make no mistake — some private investors do just that.

So before you plunge into lithium investing, I highly recommend that you educate yourself.

A good place to start on gaining this specialist knowledge is to join Howard Klein’s mailing list for his newsletter “Lithium Bull.”

You can drop Howard a note at hklein@rkequity.com.

You can tell him I sent you.

P.S. What’s the single best trading strategy for the fastest possible profits? It’s a strategy that’s been shown to more than triple the S&P 500’s returns over time. I’ll tell you about this strategy here in this report: click here for free access.

In case you missed it, I encourage you to read my e-letter from last week about how I like to take advantage of the “small-cap” effect in the stock market.

With Hurricane Harvey wreaking havoc in the southern United States, one might think that insurance companies are a sector for investors to avoid right now. Yet that is not the case with this week’s Momentum Trader Alert recommendation, which traces its history back to the earliest years of the American Republic. In fact, I can’t recall ever recommending a stock with an older history. Founded in 1792 and headquartered in Bloomfield, Connecticut, Cigna Corporation (CI)

Exclusive  Upping Your Bet on Tech