The Technology Hare and Financial Tortoise 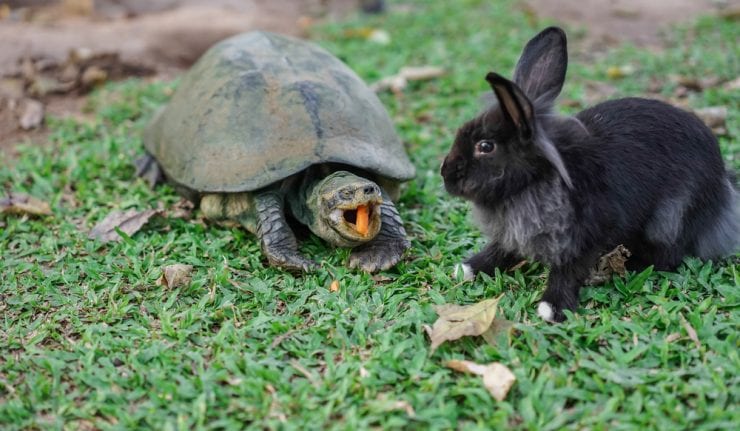 The overuse of the phrase “crowded trade” comes to mind when we think of certain Nasdaq stocks that occupy the top 10 spots within the Nasdaq 100 or that begin with the letters F-A-N-G.

For the past year and a half, these specific technology growth stocks and some other heavyweight names have done the heavy lifting for priming bullish market sentiment and driving index-related performance. There have been other sectors with similar performance (aerospace, defense, select industrial and select biotech), but none that come with the fanfare of owning big-cap tech.

One sector that has proven elusive in satisfying the animal spirits has been financials. Following the Trump win in November and heading into 2017 with the Fed’s stated dot plot plan of hiking the Fed Funds Rate four times during the year, investors quickly embraced banks, insurance, brokers and just about everyone else that was in the business of lending capital to both commercial and retail borrowers.

In fact, when comparing the Financial Select Sector SPDR ETF (XLF) that trades roughly 50 million shares per day to the Nasdaq 100 and the S&P 500, the charts don’t lie… XLF is the best performing of the three because of the immediate 15% lift it enjoyed from the Trump win. And to the surprise of not just myself, XLF is still out in front as of September 15, 2017. The chart below pretty much tells the story as to why market pundits have been so ho-hum on the financials. The sector began the year at an elevated position and has really been consolidating that move for two quarters.

Bond yields moved higher last week following two significant headlines. The first was the federal debt officially surpassing $20 trillion for the first time on Monday, Sept. 11, as the debt subject to the legal limit set by Congress jumped $317,645,000,000 in one day — following President Donald Trump’s signing of a spending-and-debt-limit deal that will fund the government through Dec. 8.

After President Trump signed the legislation suspending the debt limit, the total debt immediately jumped to $20,162,177,000,000 and the portion of it subject to the limit jumped to $20,126,392,000,000, according to the Daily Treasury Statement for Sept. 8, 2017. This headline got the full attention of the global bond market. The following Tuesday saw bond yields rise after a poor “bid to cover” ratio at the 10-year Treasury bond auction. This soft auction comes as the Fed is intending on reducing its balance sheet by selling Treasury securities and mortgage-backed security (MBS) assets that also will add upward pressure to bond yields.

As a result, the bond market and CNBC’s Rick Santelli (aka: John the Baptist crying out in the wilderness) are sending a clear message that there is a limit to how much money the U.S. government can borrow without upsetting global financial markets. At the same time, it is my view that as yields bump higher, bank stocks and all manner of financial equities, which make up almost 14% of the S&P weighting, are set to regain their leadership status during the fourth quarter that surely will help to support the bull case for a higher market going forward. The table below shows the most recent data available. 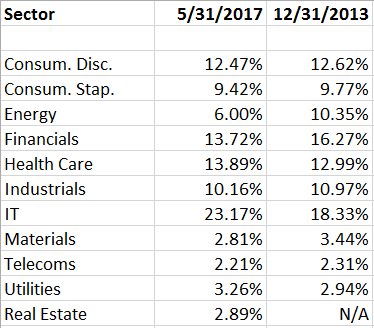 The Quest for Dividend Income Is a Crowded Trade

From the most recent Navellier Teleforum conducted on Sept. 14, the leading response for what investors were interested in raising their exposure to was dividend income. I noted last week that high-profile growth stocks were the life of the party for the first eight months of the year. But that changed last week after most dividend growth stocks outperformed all other sectors even as the yield on the 10-year T-Note rose to 2.20%. Money came pouring out of long-dated Treasuries and rotated hard into blue-chip dividend-paying stocks, where balance sheets are pristine and a history of rising dividends is evident.

So while the quest for yield has widespread appeal with the financials clearly a beneficiary as rates tick higher, where do investors go for robust dividend income when the yield on the Financial Select Sector SPDR ETF (XLF) and most of its major components sits at less than the 1.98% paid out by the SPDR S&P 500 ETF (SPY)? They are finding it in publicly traded private equity partnerships.

I would argue that yield-hungry income investors pay special attention to the fortunes of The Blackstone Group LP (BX), Carlyle Group LP (CG), Kohlberg Kravis Roberts & Co. (KKR), Apollo Global Management LLC (APO) and Oaktree Capital Group LLC (OAK). (I have no position in these stocks). Some would argue that the Business Development Companies (BDCs) fall into this category, and to some extent they do. But for today, I’m focusing on the pure partnerships that report K-1 income.

Distributions vary quarter by quarter, so I use a trailing four-quarter blend to come up with an average yield that reflects a more realistic picture of what the annual income stream looks like. It may come as a pleasant surprise to many that the trailing 12-month yield for the stocks noted is about 7.0%. Better yet, the fourth and first quarters typically are the highest paying of the year. That means we’re coming right into the sweet spot of being long on this short list.

For the most part, the stocks I am mentioning do not fall into what are considered classic Navellier growth stocks, which are stocks that maintain their dividends at the same level until they are raised again. It is not so with private equity. If private equity makes money during the quarter, you get paid well. If they don’t see a large bump in asset management fees or don’t realize nice gains on exiting assets, the distributions can be nominal. Hence the use of blending the trailing payouts.

With that said, the people running these companies are some of the brightest in the business. The global investing landscape for what they do has been ripe with opportunities during the past 10 years. Those opportunities are just now being harvested, while they raise money for funds in other distressed areas, such as energy or commodities with the same objectives in mind, turning assets that can be bought for 50 cents on the dollar into those that can be sold for 90-100 cents on the dollar.

Of course, investing in private equity firms is not for everybody, but from my seat of having followed the sector for the past five years, the tailwinds of opportunity for this sub-sector within the broader financial sector look like more than just a stiff breeze.

In case you missed it, I encourage you to read my e-letter article from last week about the effects of Hurricane Harvey and Irma on the markets.