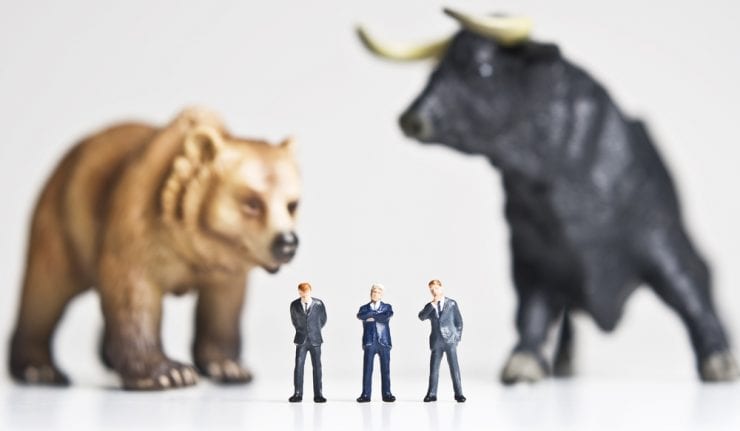 The U.S. stock market has been on a remarkable winning streak over the past decade.

Among the 47 global stock markets I track, as measured by the Vanguard Total Stock Market Index (VTI), the U.S. market has ranked #1 and #4 over the past 10 and five-year periods, respectively.

Yet, over the past 12-month period, the U.S. stock market’s performance has been middling at best, ranking #26 out of #47 global stock markets. And that underperformance is accelerating.

Here’s why I think a bear market may be lurking around the corner.

First, life has its seasons, as do stock markets. And the rhythm of the seasons suggests that a bear is overdue.

The S&P 500 hasn’t had a 20% pullback since August 2011. Junior brokers working at major stockbroking firms were still in high school at the time of the last major stock market pullback.

Second, the psychology of the market has shifted from fear to greed.

The Bitcoin mania suggests that financial euphoria is creeping back into financial markets. Last week, I went to a presentation on a Bitcoin fund in London. It was held in a casino. The story of Bitcoin’s surge from three cents to as high as $5,000 got a lot of gamblers’ pulses racing.

Market lore has it that you should worry when the shoeshine boy is recommending stocks. Now, I don’t have a shoeshine boy.

But I recently heard about a guy working behind a UPS counter telling a customer that he had bought the cryptocurrency called neo for $1. Since then, neo had gone up to $25.

With the S&P 500 trading at a Cyclically Adjusted Price Earnings (CAPE) ratio of over 30, the yellow light is flashing. It still is cheaper than when it hit a CAPE ratio of 45 in 2000. Still, the leading U.S. index is the third most expensive stock market in the world after Denmark and Ireland.

According to Shiller, there are two additional warning signs. Earnings in the S&P 500 are high, growing at 13.3% year over year. Monthly volatility has been low, with a 3.1% deviation in one-month returns over the past year.

When the three factors of high CAPE ratio, strong earnings growth and low volatility converge, says Schiller, look out below.

Three Strategies for a Bear Market

None of this means that the U.S. stock market can’t go higher.

It does mean, however, that you need a plan when the bear finally arrives.

Below are three strategies you can use to formulate that plan.

“Buy and hold” is the mantra of modern financial theory.

The success of index funds like Vanguard over the past nine years has made investors forget the pain of a real bear market.

Even Warren Buffett endured drawdowns of 50% three times in the past: once in the early 1970s, once in 1999 and again during the 2008 financial crisis.

Buffett always has warned that if you can’t endure such drawdowns, you shouldn’t invest in the stock market.

Put another way, in a bear market, “buy and hold” becomes “grin and bear it.”

Here’s what you should know.

Vanguard can’t sell even if it wanted to. Mutual funds and ETFs are legally bound to remain fully invested.

Your ability to sell gives you a massive edge over large investors.

A simple rule of thumb like a 25% trailing stop will do wonders for your psychological and financial health when the bear arrives.

Sir John Templeton made his first fortune investing in the economic recovery of Germany and Japan after World War II.

He famously bought a basket of 100 stocks in war-torn Germany and watched them soar. He plowed his funds into Japan in the 1950s, profiting from that market’s remarkable rise.

It is less well-known that Templeton made his quickest fortune shorting dotcom stocks in late 1999.

While his timing was good, it was not perfect.

In the early days of the trade, his positions went against him. But by March 2000, Templeton’s bet against the dotcom stocks looked ingenious. Templeton made tens of millions of dollars in a matter of months.

Today, there are plenty of ways for you to replicate Sir John Templeton’s success.

Unlike in 1999, you can buy exchange-traded funds (ETF) that short the U.S. market.

In fact, you can even short the market using leverage.

Keep that in mind as the stock market starts to dive.

Mark Cuban is one of the most successful entrepreneurs of his generation. According to Forbes, Cuban has a net worth of $3.3 billion.

He owns the Dallas Mavericks. He went toe-to-toe with Donald Trump during the 2016 elections. He even has aspirations of running for president in 2020.

But much of this would not have been possible had he preserved his wealth during the dotcom collapse.

Mark Cuban was an internet entrepreneur, one of the founders of Broadcast.com.

Cuban was also lucky enough to find a buyer. Yahoo! bought his company near the peak of the internet bubble.

Cuban received $56 million worth of Yahoo! stock. At the time Yahoo! was worth around $240 per share.

When your company is bought out by another company, you get paid in restricted stock. You are not allowed to sell the stock for a period of time.

So how did Cuban protect his wealth?

Cuban needed to hedge his oversized investment in Yahoo. To do so, he used sophisticated options strategies. Specifically, he reportedly bought put and call collars around Yahoo stock.

Luckily for Cuban, the gains in the option positions hedged out the losses in Yahoo’s stock.

Had Cuban not protected his investment, his stake in Yahoo! alone would have fallen to $2 or $3 million. Cuban wouldn’t starve. But he would not be the owner of the Dallas Mavericks today either.

The traditional advice for bear markets is to suck it up and hold on. That’s little comfort as you watch your portfolio’s value evaporate day after day.

Yet, with a simple trailing stop loss, you can preserve a big chunk of your wealth.

And keep in mind the old Wall Street maxim, “The bull goes up the stairs, and the bear jumps out the window.”

That means you can even make more money, more quickly in a bear market, than you ever could in a bull market.

I recommend you put your bear market plan in place today.

In case you missed it, I encourage you to read my e-letter from last week about my dinner with Putin’s number one enemy.

Publisher’s Note: If you’re not averaging double-digit percentage gains on your investments, it’s worth your time to check out Nicholas Vardy’s portfolio strategy. You can learn about his two most recent recommendations — both up over 50% in just the last few months — along with his favorite “wealth-compounding machine” — here in his updated research report. Click here to keep reading.