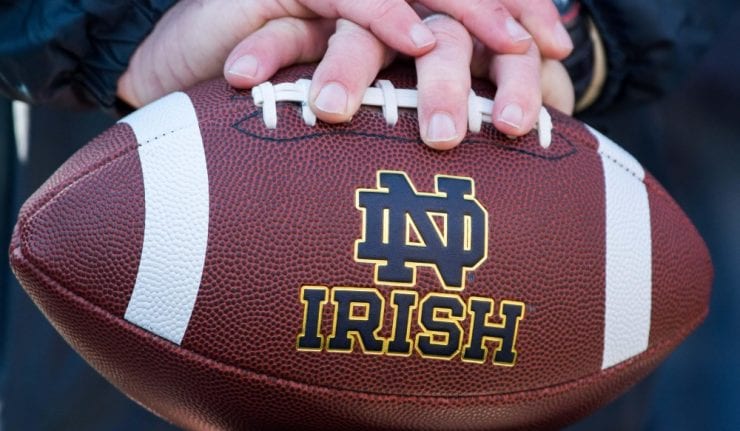 The University of Notre Dame’s Athletic Director Jack Swarbrick hosted head football coach Brian Kelly at his home for an eight-and-a-half hour off-season meeting that already is paying off.

Swarbrick invested in bringing in 17 new football staff members to help Kelly pursue a turnaround rather than succumb to the predictable calls from certain fans who want a new head coach after a storied program has a rare losing season. The big changes may explain how the Fighting Irish have started the season with a 4-1 record to improve upon last year’s 4-8 team.

Notre Dame’s most impressive win so far in 2017 occurred during a nationally televised game on Fox Saturday night, Sept. 23, when it used a ball-hawking defense and a productive offense to avenge last year’s home loss to Michigan State University with a convincing 38-18 victory on the road against the Spartans. The win carried heightened significance for Notre Dame as it marked the first football game between the two Midwestern rivals since the Aug. 2 death of legendary Fighting Irish football coach Ara Parseghian, who led the team in 1966 to a 10-10 in East Lansing with the Spartans that the media at the time called the “Game of the Century.”

The tie 51 years ago let Notre Dame stay No. 1 and kept Michigan State No. 2 to propel Parseghian to his first of two national championships. This year’s game came after Notre Dame, which played in the 2013 national championship game in Kelly’s third season at the helm, and Michigan State, which reached the national semifinals two seasons ago led by its head coach Mark Dantonio, both finished with uncharacteristic losing records last year amid injuries and many frustratingly close defeats.

Swarbrick showed the value of a good adviser, whether in athletics or investments, by offering input to turn around subpar performance. Notre Dame lost its traditional winning edge last season when seven of its eight losses came by one score.

The perennially high expectations of Notre Dame’s fan base caused grumbling about whether Kelly could steer the team back to its winning tradition but the early results show he is succeeding, with a well-played one-point loss against the No. 5-ranked University of Georgia as the only blemish on the won-loss record of the Fighting Irish so far this year. Rather than succumb to the pressure, Swarbrick chose to support his coach with a goal of restoring its winning tradition quickly.

Kelly acknowledged before the start of this season that he had become too focused on production and wanted to take a positive approach that sets clear expectations for players and coaches, as well as motivate the team to perform at its best. He admitted to lapses in the team’s mental toughness, physical conditioning and accountability last season that he has tried to fix with bold changes.

Big changes for 2017 include new offensive and defensive coordinators. Also new are the special teams coach and the strength coach.

Notre Dame’s changes produced a 20-point margin of victory against Michigan State in a game that would have been more lopsided without the host Spartans scoring a late touchdown and a two-point conversion. Thousands of the home team’s fans began to leave the stadium midway through the second half.

Those who remained watched the Fighting Irish celebrate victory with high spirits after the game and the exaltation continued in the caverns of the football stadium as Notre Dame players reveled loudly enough that the sounds carried out of the visitors’ locker room nearby to where members of the media gathered for Kelly’s post-game interview. The players may have been capturing the spirit of Parseghian-coached teams that resolved to have “no breaking point,” while pushing opponents to their breaking points.

The win demonstrated that the kind of progress Swarbrick and Kelly envisioned for the team is materializing quickly, since the Spartans won last year’s match-up, 36-28. The fiery and occasionally testy coach also seemed to exude a calm confidence during his press briefing as he responded to questions from the media and even interjected praise without prompting for Dantonio’s team as “disciplined, hardworking and tough.”

“You can see where they are going to be in a year or so,” said Kelly, as if he sympathized with his counterpart who needed to implement off-season changes of his own that included dismissing four players from last year’s team after they were charged with crimes.

Kelly, who took up yoga during the off-season, started eating a healthier diet and lost 15 pounds, said he could see his team “coming together” with back-to-back triumphs against Michigan State and Boston College, both part of the so-called “Power 5” athletic conferences.

Swarbrick already is seeing a return on his off-season investment in Kelly’s football staff. As I left Spartan stadium after the media briefing with Kelly, I walked about 100 yards and asked a well-dressed gentleman for directions. As he showed me a map on his mobile phone, I spotted where I needed to go and then noticed the helpful fellow guiding me was none other than Swarbrick.

Much the way Swarbrick assisted me in finding my way, he did so for Kelly in the off-season by providing the coach with the resources and counsel to get back on course. I asked Swarbrick for his impressions after the decisive win against Michigan State.

“It’s a long ride home when you lose,” Swarbrick said about the 154-mile journey between East Lansing and Notre Dame’s campus that takes about three hours in normal traffic.

Based on Notre Dame’s impressive victory against Michigan State, the team’s athletic director and head football coach seem to have a program known for its history of success on a winning path again.

AT&T Seeks to Offer National Video with Purchase of DirecTV

What is the Greatest Threat to Your Investment Today? No, It’s Not the Government!