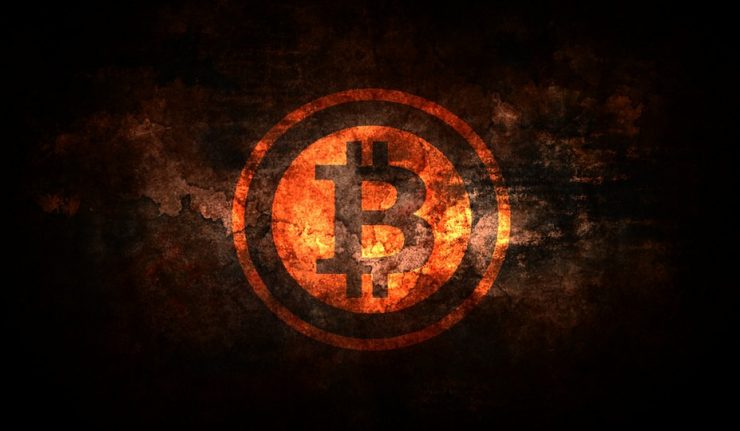 “Bitcoin should be outlawed. It serves no socially useful function. It’s a bubble and when the government starts regulating it, it will collapse.” — Joseph Stiglitz, Columbia University

Like many of you, I’ve been following and even investing from time to time in Bitcoin, the premier digital currency that is making all the headlines.

Its price just cleared $10,000 this week, but with tremendous volatility. The digital currency has fallen in half several times on its way to new highs, but clearly there is a lot of speculative fever in the cryptocurrency mania.

With my Forecasts & Strategies investment newsletter and other trading services, we’ve made money twice this year in Bitcoin, gaining 50% or more in just a few weeks. If we had the stomach to handle the volatility, we could have made even more, since Bitcoin has tripled in value in 2017.

A Bit about Bitcoin

Is the Bitcoin frenzy real or a tulip mania, as Jamie Dimon warns? Could Bitcoin eventually fall to zero? After all, it has no backing. It is an imaginative computer-generated object that must be “mined” to expand its supply. Like the gold standard, Bitcoin has severe limitations in terms of supply.

There are many good attributes to Bitcoin, Ethereum, Ripple and other cryptocurrencies. For example,  you can open a wallet anonymously and transact business privately. Not surprisingly, the Securities and Exchange Commission (SEC), and other government agencies aren’t amused and may crack down.

Bitcoin is being used as a medium of exchange, especially in developing countries that don’t have a well-developed banking system, or where local currencies can’t be trusted. However, given the dramatic rise in its value, many users prefer to invest rather than trade in cryptocurrencies.

I think Dimon is wrong. Bitcoin is here to stay, although transaction delays and liquidity are problems. It even has been made legal tender in Japan. Other countries will no doubt follow suit. The Chicago Mercantile Exchange (CME) and NASDAQ are considering a futures market in Bitcoin.

There’s an old saying on Wall Street: “They don’t leave any money on the table.” Now, there are over 2,000 cryptocurrencies out there, being created daily as Initial Coin Offering (ICOs) — a neat way to raise capital without SEC approval. I’m sure a crackdown is coming, and that could send the price of Bitcoin down sharply.

Of course, there’s the other dreaded saying: “The easy money has been made.” While Bitcoin is legitimate, speculative fever has taken hold, and you could lose your shirt if you buy at the wrong time.

A Better Way: Invest in the Blockchain Revolution!

So, what should an investor do? There’s another way to play the cryptocurrency game, and that’s to take advantage of the “blockchain.” Even Jamie Dimon thinks there’s a future to the blockchain. It is a database or ledger on the internet that stores unalterable digital records. It keeps the records of a cryptocurrency’s ownership and transfers. Thus, with blockchain, there’s always a paper trail, so to speak.

Moreover, the exciting thing is that blockchain can be used to store anything of value — money, titles, deeds, music, art, scientific discoveries and even votes. Users can be anonymous. It’s a great way to record everything — your birth certificate, marriage certificate, Social Security card, the title of your car, your home, mortgages, medical records, corporate records and so forth.

To read more about the blockchain revolution, the American Institute for Economic Research (AIER) just has put out a series of articles on the subject. Read them here.

I’m also recommending ways to invest in the stock market and profit from cryptocurrencies and the blockchain. Click here if you want to learn more about my investment newsletter Forecasts & Strategies.

You Nailed It! Have a Magical Christmas with Disney

Here’s my letter to the CEO of Walt Disney, Robert Iger:

I don’t often write letters, but this time I felt compelled to write you about the Pixar film “Coco” and the Disney short “Olaf’s Christmas Adventure” now showing in theaters.

“Coco” was inspiring and beautifully done, a masterpiece on many levels. My wife and I took our children and grandchildren to see it during the Thanksgiving holidays. Everyone at all ages loved it, and afterwards we adults talked at length about the significance of its religious and spiritual meaning — love of family, overcoming wrongs of the past, forgiveness, etc. It was also refreshing to see a positive message about a long-standing Mexican tradition. You nailed it!

You Blew It! But Then Disney Blew It…

Unfortunately, I can’t say the same about the Disney “featurette” shown before it. It was bland at best and “awful” at worst. “Olaf” is perhaps the most successful animated character you’ve developed recently, yet the writers and director went out of their way to take “Christ” out of Christmas. Here the theme was Christmas traditions, and not once did you reference the baby Jesus, or the story of the first Christmas. Millions of Christians here in America and around the world celebrate the birth of the Christ child by reading from the Bible, acting out the story of the Magi, singing Christmas carols, or attending Midnight Mass.

Instead we had to endure a 21-minute “short” about Swedish saunas, candy canes and fruitcakes. Why, even Charlie Brown’s Christmas and the annual Radio City Music Hall here in New York City end their shows with a tribute to the original Bethlehem story. Has Disney become so jaded, so politically correct, or secular that it can’t even dare to mention the true story of Christmas?

“I told my students that having you as a professor will be a high point in their Chapman journey.”

Now for a special announcement: I’m pleased to report that Chapman University in Southern California is creating a brand new position: The Benjamin Franklin Presidential Professorship, and the university has named me the first Franklin Professor.

Under this new position, I’ll be teaching several courses a year in economics, finance and business, and writing a new book, “Eurekanomics,” based on my work on gross output (GO). Chapman also will unveil a bust of Ben Franklin on campus. All donors will be invited to attend the ceremony.

Located in Orange County, California, Chapman is a liberal arts school that houses Milton Friedman’s library and has a Nobel Prize economist on its faculty: Vernon Smith, famous for experimental economics.

The campus is beautiful and impressive. The university has top schools in law, business and film. Chapman is the only university in the country with busts of Milton Friedman, Ayn Rand, Ronald Reagan and Margaret Thatcher on display… as well as George Washington, Thomas Jefferson and Adam Smith. And soon, there will be one of Ben Franklin!

The growth of Chapman is due largely to the work of Jim Doti, who was president from 1991 until 2016. Jim earned his Ph.D. in economics under Milton Friedman at the University of Chicago, and has transformed a small college into the fastest growing market-friendly university in the country. He is now President Emeritus and Donald Brin Professor of Economics at Chapman. 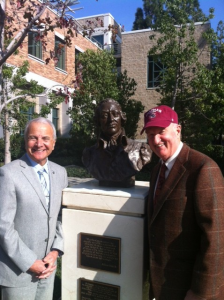 Mark Skousen and Jim Doti in front of the Adam Smith statue at Chapman University.

And the new President, Daniele Struppa, is equally capable of leading this rapidly expanding market-friendly university. Many of you may have heard him speak last year at FreedomFest. Both he and Jim Doti will be returning next year.

Please consider donating to this good cause in your end-of-the-year holiday giving. It’s tax deductible, and in the spirit of Ben Franklin (who invented the idea of matching funds), any donation to Chapman University for this purpose will be matched by an anonymous donor up to $50,000.

Your donation will be used specifically to fund the Franklin professorship and the Ben Franklin bust. Some creative levels of giving could be $100 (a Franklin $100 bill), $311 (in honor of Franklin’s 311th birthday — he was born in 1706) or $1,776, in celebration of the Declaration of Independence.

Remember, whatever you donate, your contribution will be matched by an anonymous donor up to $50,000.

And anyone who donates $311 or more will receive an autographed copy of Franklin’s Autobiography (Vo.1) and The Compleated Autobiography of Benjamin Franklin (Vol. 2), which my wife and I compiled and edited — complete with two rare Franklin stamps. It would be a most memorable gift!

Or call Chris Pagel directly at Chapman University, 714-516-4511, or email him at institutionalsupport@chapman.edu.

Next month, as the new Franklin Presidential Professor, I will be teaching “Eurekanomics: Great Breakthroughs in Economic Science” in January, and in the Spring semester, “Financial Economics,” while my wife Jo Ann will be teaching courses in “Artistic Inquiry.” If you are in the area, please stop by to attend a class or two and see how your money is being put to work to influence a new generation of leaders.

previous article
Back into This Core Technology Holding
next article
What’s the deal with China’s Debt?