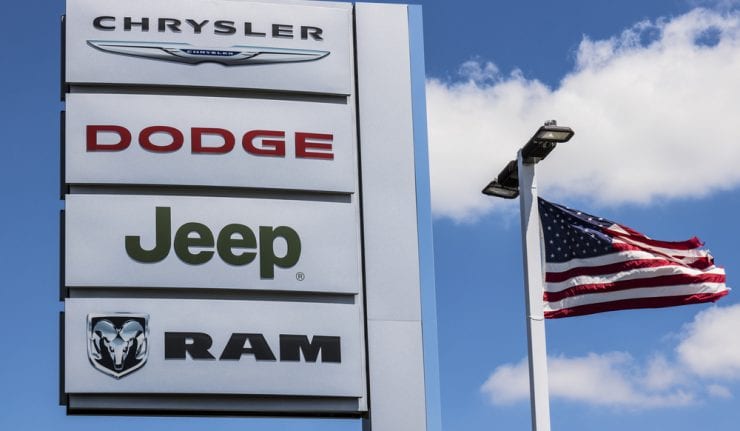 Fiat Chrysler Automobiles N.V. (NYSE: FCAU) CEO Sergio Marchionne did not faze his company’s loyal investors by announcing last week that he plans to step down next year, name his successor this June and refrain from selling the automaker’s highly profitable Jeep sport utility vehicle (SUV) brand that has attracted interest from suitors such as China’s Great Wall Motor.

Investors clearly see value in the company’s stock, which showed strength by surging $0.53, or 2.26%, on Friday, Jan. 19, to close at $23.93. Despite the respected Marchionne announcing his plans to hand the reins of the company to a successor in 2019, Fiat Chrysler’s share price rose 3% overall last week, following its opening price of $23.23 on Tuesday, Jan. 15, the day after the market was closed for the Martin Luther King Jr. holiday.

The stock’s share price jumped 76.84% in 2017 and had risen 35.43% though Jan. 19. Fiat Chrysler is a stock with momentum. Barclays published a research note on Oct. 5 that listed a $21 price target for Fiat Chrysler, but the company already has blown well past that level.

Fiat Chrysler (FCAU) versus the S&P 500 over the last six months.

Fiat Chrysler’s share price has been fueled by improved financial performance, its potential as an acquisition target and speculation it might sell its coveted Jeep brand to another automaker. However, Jeep’s profitability and appeal to rival automakers as an acquisition target give Marchionne incentive to keep it, especially to help Fiat Chrysler achieve its goals of becoming cash flow positive by this June and to pay off all its debt by the year’s end.

“Finishing the year with cash on your balance sheet instead of debt is a big, big step for us,” Marchionne said at last week’s North American International Auto Show in Detroit.

The CEO’s interest in keeping the company’s distinctive Jeep brand is understandable and possibly even shrewd, since analysts regard Jeep as the most valuable of Fiat Chrysler’s brands and worth more than the automaker itself. Jeep is a global brand that dates back to World War II, when the U.S. Army used a reconnaissance vehicle that was small, lightweight, had four-wheel drive and could be used in any terrain — the precursor to today’s versions.

Marchionne has been open about his willingness to consider a buyer for Fiat Chrysler in the past, but he said at the auto show in Detroit last week that he is not seeking a combination at this time. He also seems to view the company’s iconic Jeep brand as a key to protecting the value of his company. Jeep is the best-selling brand in Fiat Chrysler’s NAFTA region, which consists of the United States, Canada and Mexico. Plus, Jeep’s Grand Cherokee model is one of parent Fiat Chrysler’s most profitable vehicles worldwide.

Jeep also is sold in China through a 50-50 partnership formed in 2010 between Fiat Chrysler and state-owned Guangzhou Automobile Group (GAC). Fiat Chrysler has a goal to sell two million Jeep vehicles worldwide in 2018.

“We’re not going to break up anything,” Marchionne said at the auto show in Detroit last week during a press conference. “We have no intention of breaking it up and giving anything to the Chinese.”

Fiat Chrysler features a host of additional well-known brands other than Jeep that include Chrysler, Dodge and Ram in the United States, and Maserati, Alfa Romeo and Fiat in Europe. Marchionne had previously said he would consider splitting Alfa Romeo and Maserati into their own company, but investors in Fiat Chrysler should not expect a near-term sale of the company or any of its business units. Instead, investors should focus on the automaker’s prospects as a standalone organization that would protect the value of its brands by keeping them together with the one-of-a-kind Jeep.

The auto industry is unique in that it is difficult to separate a company’s brands from one another, since components, powertrains and many systems are shared between various models to enhance cost efficiency.

The sale of any single brand, especially mainstream ones, would lead to a loss of “scale,” said Stephanie Brinley, a senior analyst at IHS Markit.,

“Marchionne denies talks are happening with anyone, relative to acquisition,” Brinley added.

Marchionne said during the auto show in Detroit that the industry increasingly will be spurred by self-driving and electric vehicles.

By 2025, more than half of the power units on the road will have some “electrification,” including hybrid vehicles that are powered by both combustion and electric power, Marchionne said.

Marchionne has steered Fiat Chrysler toward growth, reduced its debt and appears ready to leave the company much better off than when he became CEO of Chrysler Group in June 2009 after the company emerged from Chapter 11 bankruptcy protection. His responsibilities grew in October 2014 when he became CEO of Fiat Chrysler Automobiles N.V., and the visionary leader has turned the company’s stock into a darling for investors that will leave a tall task for any successor to match.

Paul Dykewicz is an accomplished, award-winning journalist who has written for Dow Jones, the Wall Street Journal, Investor’s Business Daily, USA Today, the Journal of Commerce, Seeking Alpha, GuruFocus and other publications and websites. Paul is the editor of StockInvestor.com and dividendinvestor.com, a writer for both websites and the columnist of the weekly Global Guru investment e-letter. He further is the editorial director of Eagle Financial Publications in Washington, D.C., where he edits monthly investment newsletters, time-sensitive trading alerts, free e-letters and other investment reports. Paul previously served as business editor of a daily newspaper in Baltimore. Paul also is the author of an inspirational book, “Holy Smokes! Golden Guidance from Notre Dame’s Championship Chaplain,” with a foreword by former national championship-winning football coach Lou Holtz.

previous article
Treasury Yields Higher Ahead of Next Fed Meeting
next article
President Trump Imposes Tariffs to Curb ‘Dumping’ of Appliances into the U.S. Market

Fiat to Buy Chrysler for Pennies on the Dollar