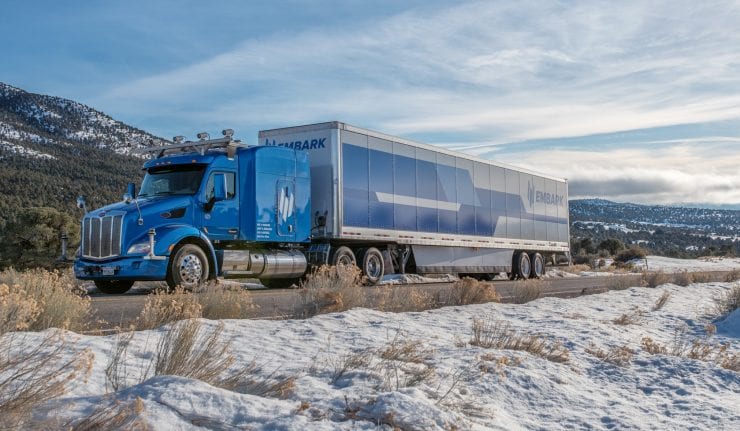 While many traditional automotive manufacturers and technology companies are attempting to reinvent the trucking industry by introducing alternative power sources, one technology startup is betting on an approach that would add autonomous driving to traditional trucking equipment.

At the same time, traditional truck manufacturers and new technology companies are developing their own solutions to revolutionize the way that we transport goods. The market-altering products that currently are being developed by Tesla and automotive manufacturers might be long-term solutions but Embark is offering a possible bridge until then. Embark seeks to tap existing infrastructure and the self-driving capability at a much lower cost.

While most new autonomous driving technologies depend at least partially using satellite navigation technology and advanced mapping to determine a vehicle’s surroundings, Embark uses a multitude of cameras, sensors and detectors mounted on a vehicle to help drive and avoid collisions. This approach allows Embark’s solution to provide quick returns on investment without exhaustive mapping of all U.S. roads in advance, while greatly cutting the time needed to bring the product to the market.

A managing partner at the Data Collective (DCVC) venture capital fund, which leads funding efforts for Embark, stated that Embark is “producing top-notch real-world driving results far more quickly and on far less capital than anyone else.”

In just 15 months, Embark went from an empty garage and a standard Peterbilt truck to moving freight on a regular basis. In this effort, Embark has partnered with Electrolux AB (OMXN:ELUX B) and Ryder System, Inc. (NYSE:R) and runs the “longest automated freight route in the world today” of 650 miles between Texas and Los Angeles. The program relies on Ryder’s truck drivers to shuttle the trailers from local warehouses to the interstate and back. However, once the trailer arrives at the interstate access point, the Embark automation takes over and pilots the truck to its destination.

At this stage of development and testing, Embark still uses drivers on board to monitor the operation of the automated system and to intervene in case of any emergency. However, the company is using its collaboration with Electrolux and Ryder Systems to improve the system to the point where it can be introduced into the market as a self-sufficient and fully autonomous system. Revolutionary technologies require years of development and massive infrastructure investments. However, Embark’s solution could be fully operational in matter of months using existing infrastructure. For now, this approach still requires truck drivers for local shuttling of trailers. However, Embark’s product might be the first step towards improving efficiency and alleviating many issues related to long-haul or over-the road (OTR) trucking.