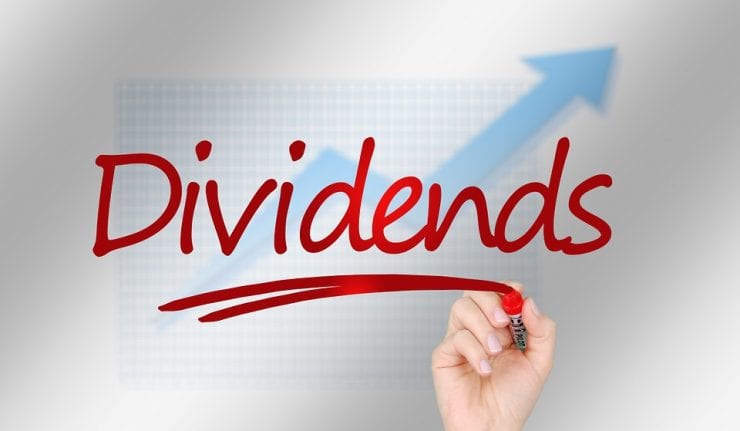 Last Friday was a key trading day for the stock market as fears of interest rates rising too quickly and by more than expected over the short term started to diminish.

In what is widely seen as the primary headwinds to the bull trend, both rising inflation and increasing interest rates have been the current culprits for the volatility that has the Dow gyrating by hundreds of points on a daily basis these past two weeks. At the same time, the CBOE Volatility Index (VIX) has declined substantially from its reaction high of 50.30 set on Feb. 9 when the S&P 500 tested its 200-day moving average at 2,533 and closed at 16.49 last Friday, down 11.91% for the session.

The sudden shift in investor sentiment that led a charge back into stocks at the end of last week was a direct result of the lifting of fear of a 3.0%+ yield for the 10-year Treasury. Soft data on existing homes and retail sales, along with a healthy bond auction, put a much-needed bid under the 10-year T-Note, taking the yield back down to 2.87% from the recent high of 2.94%. As a result, investor attention immediately shifted to the ever-brightening earnings picture for the S&P 500 to set off a green-light rally that was broadly represented by most sectors. 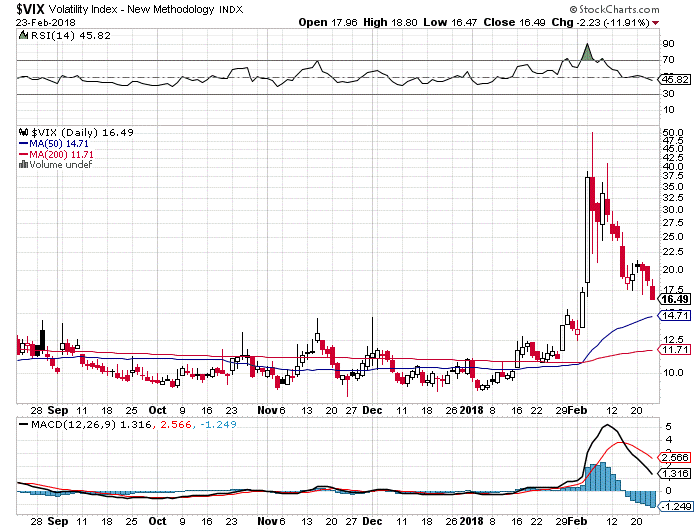 Clearly, the dual threat of rising inflation and rising interest rates that fueled investor angst and triggered the correction aren’t going away. In my view, the stock market will adjust to both inevitable forces, but over what likely will be a longer timeline than what was being construed as a more immediate and dangerous situation. The S&P 500 shed 11.4% from its peak (2,782) to trough in 10 trading days, after which it recovered roughly 63% of the decline as of last Friday.

Core inflation is running at a rate of 1.8% on an annual basis and remains below the Fed’s target rate of 2.0%, but January did show an uptick that could set the tone for February and beyond if wages perk up further. This week, investors will digest data on New Home Sales, Durable Goods, Consumer Confidence, Chicago PMI, ISM Index and Construction Spending, all of which will become more in focus now that Q4 earnings season is winding down. 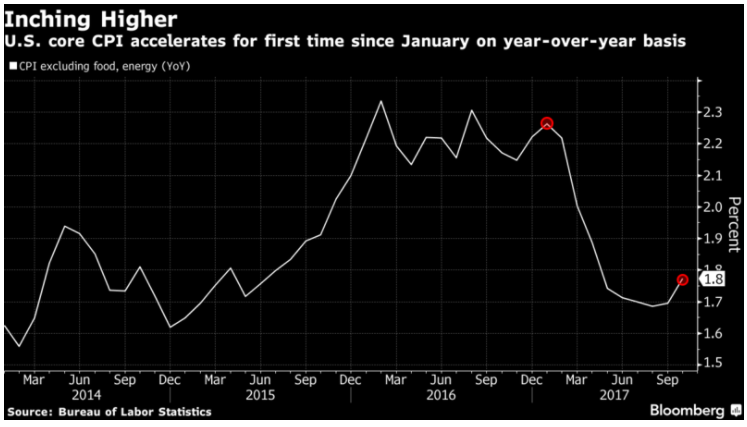 Without a doubt, the most important set of data points to the market will be the upcoming employment/payroll report due out March 9, exactly one month from when the market bottomed out. How investors react to what will likely be another healthy report will tell us several things. First, whether the market will act again like a three-year old having a temper tantrum. Secondly, whether the transfer of dovish Fed policy to that of improving economic fundamentals accompanied by slightly tighter Fed policies is going to get any smoother.

Personally, I do not see a full retest of the recent lows taking place. I think last Friday’s session showed investor confidence returning to the market in a big way and the notion of incrementally higher interest rates with a hint of inflation is acceptable to many, though certainly not embraced.

With computer generated buy-and-sell programs in full control of the intraday market swings, it is important to take note of key technical levels in that a failure of the S&P to take out overhead resistance at 2,750 would incite a pullback. To what extent another sell-off would be is anyone’s guess. Most technicians would argue that another drop-off would be very constructive and relevant to the bull camp and bring satisfaction to the majority of market professionals that want the market to stick to the technical playbook and put in a double-bottom, higher-low formation that presents a super sweet entry point to commit new money.

It is looking more like, at least to me, that opportunity will not materialize. This past Monday, BlackRock, the largest asset manager in the world, just got a lot more bullish on U.S. stocks —  claiming tax cuts are “supercharging” corporate profits. BlackRock expects that stimulus from the tax reform will boost earnings growth this year by as much as 19%. Strategists at BlackRock feel business spending plans, accelerating earnings, the pace of stock buybacks and dividend growth are still not appreciated by investors to the level they should be. (CNBC Market Insider — BlackRock is suddenly a lot more bullish on stocks with tax cuts ‘supercharging’ corporate profits February 19, 2018).

FactSet released its most recent table of key metrics for the market now that 85% of companies within the S&P 500 have reported fourth-quarter 2017 results and BlackRock is not alone in its summation. The findings support an extension of the rally based on accelerating earnings alone. As per the data points below, if Q4 2017 earnings growth comes in with a final number of 15.2% as noted, it will mark the highest earnings growth since Q3 2011. And that is coming off a strong year, not a recession where such numbers are more typical. 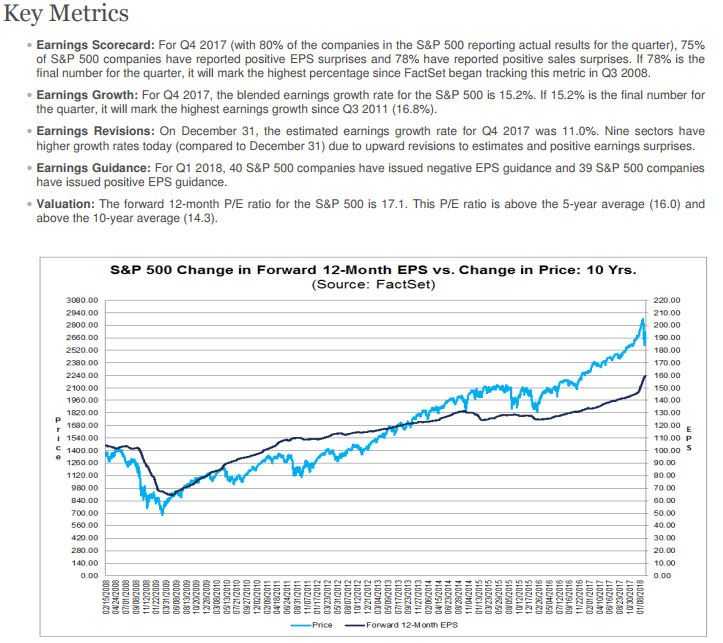 By overwhelming numbers, most investors have dividend growth as their primary investment objective. In a rising-rate environment, owning blue-chip stocks that are rapidly raising dividend payouts is the best way to drive income growth when bond prices are in a bear market. The chart below shows that 2017 saw dividends grow by 7.07% on average, yet still well below that of 2012’s 18.25% growth rate. However, 2012 saw many companies reinstate dividends after slashing and eliminating dividends during the 2008-2010 Great Recession years, which skews the number. 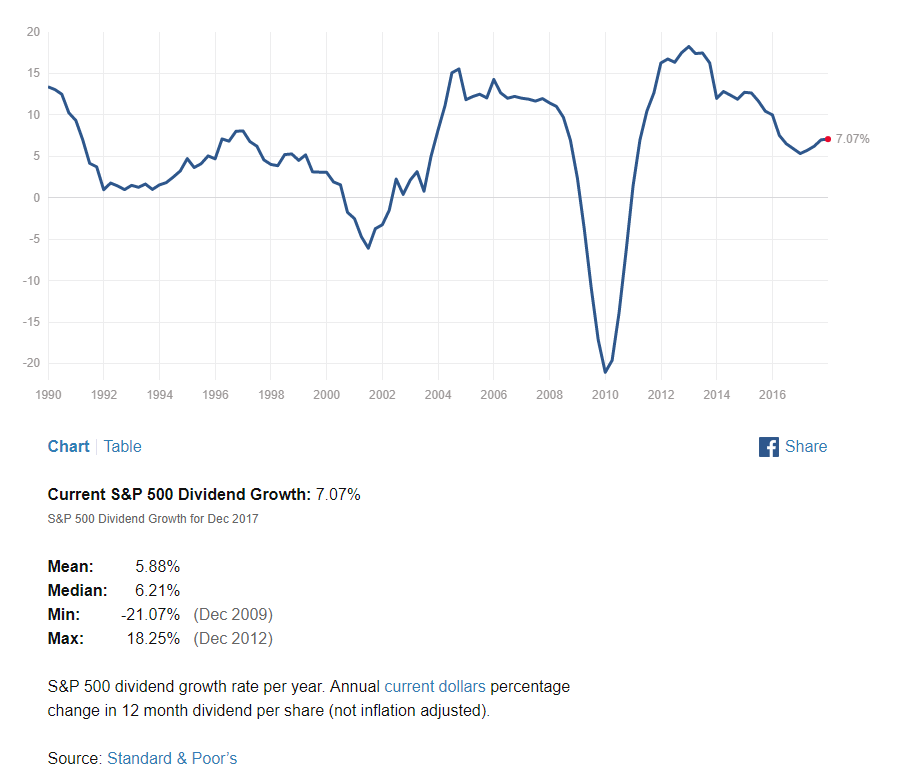 The good news is that we may observe double-digit-percentage dividend growth in 2018 and 2019, based on a combination of strong earnings and tax reform. We are only one quarter into this new era of economic prosperity and the pace of dividend increases is quick, while the outlook is positive for income investors who buy good dividend growth stocks.

My Cash Machine high-yield dividend advisory service stands to benefit greatly from the current pro-dividend environment and can be viewed by clicking here. The bottom line is that tax reform means big earnings growth lies ahead, but it also means big return of capital to shareholders as well in the form of rapidly rising dividend payouts for the next two to three years. We might be in a Goldilocks economy, but the prospects for the dividend-growth sector could be upgraded.

In case you missed it, I encourage you to read my e-letter article from last week about how the recent market pullback has served as an attractive entry point for investors.