Away We GO: Trump Tax Cuts Unleash an Investment Boom in America 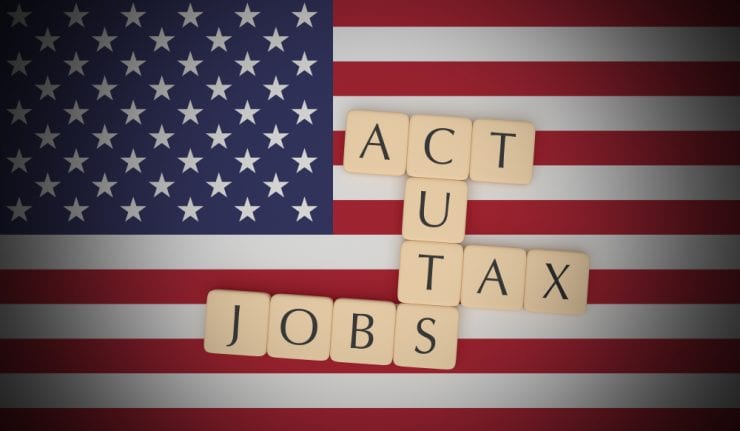 Now we know why the stock market took off in 2017.

Today, the federal government released a HUGE number for fourth-quarter 2017 gross output (GO), which I regard as the top line in national income accounting to measure spending at all stages of production. The latest GO data show that the U.S. economy is booming, especially in business spending, probably due to the new business tax cuts and deregulatory environment under the Trump administration.

GO in second- and third-quarter 2017 grew slower than gross domestic product (GDP), suggesting a sluggish economy, but that all changed with the just-released fourth-quarter 2017 GO statistics. Adjusted GO grew an incredible 5.6% in real terms during the fourth quarter to mark the fastest rate since the 2008-09 Great Recession.

Total spending in the economy (GO) is now almost $43 trillion. 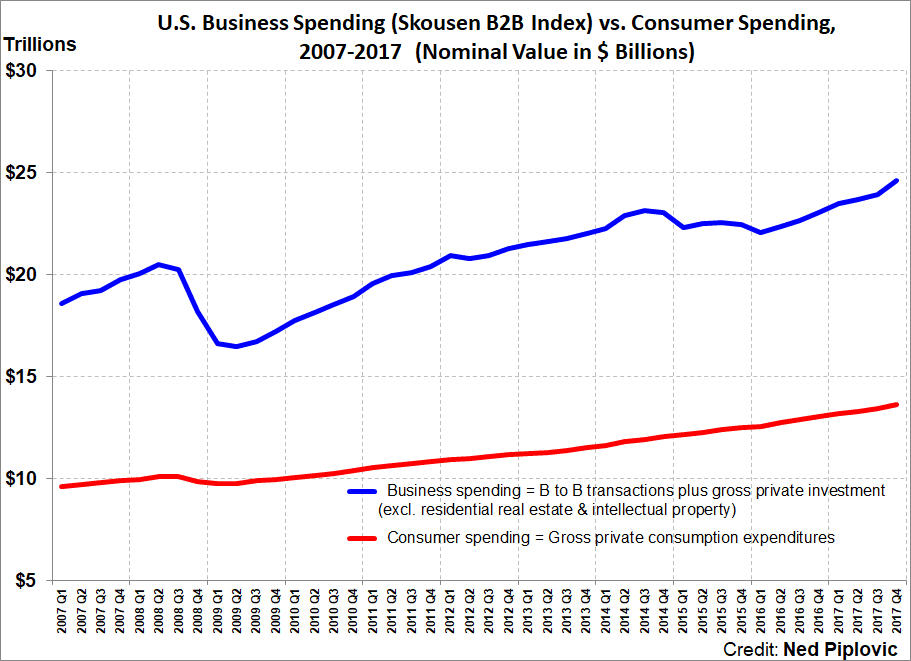 Meanwhile, real GDP for the fourth quarter was up a tepid 2.9% and failed to take into account this new growth in the supply chain. Remember, GDP measures the value of final or finished goods and services only and leaves out all the business-to-business (B2B) spending along the supply chain.

Thus, GDP is a flawed measure of the economy, overvaluing consumption at the expense of business investment. B2B spending actually rose almost 9% in real terms in the fourth quarter, three times faster than the third quarter. That’s a record.

In short, the supply side of the economy (the production side) is on fire. This should be good news for the stock market and the chances of a second tax cut, perhaps on capital gains, before the November elections.

It will be interesting to see if this trend continues into 2018. GO, especially B2B spending, is a strong leading economic indicator, and is now predicting higher GDP growth.

Unfortunately, GO data comes out after GDP data, and we won’t have first-quarter 2018 GO figures until July 20, right after FreedomFest. The good news is that BEA director Brian Moyer indicates that the government will start releasing GO at the same time as GDP by 2019. Stay tuned!

To read my full press release on GO and GO by Industry, go to www.grossoutput.com.

Good news! I’m happy to announce that John Mackey, CEO of Whole Foods Market and co-ambassador to FreedomFest, will be speaking on a topic he’s never addressed before: “Investing on the Run: How I Became a Successful Part-time Investor Running a Full-Time Business.” This is a particularly important topic for all those busy executives, physicians, attorneys and others out there who don’t have time to focus on investing. At the Fast Money Summit, he will reveal for the first time his investment system that does extremely well without requiring full-time work. It is not to be missed!

This just in: We have confirmed that Senator Mike Lee will address us about big-spending Republicans, as well as why Speaker Paul Ryan won’t be running in November. More speakers will be announced soon.

You Blew It! Financial Media Misses the Mark on What Drives the Economy

“Consumer spending, which accounts for two-thirds of economic activity, drives the economy.” But is it true?

In the past month, I’ve seen similar quotes in Reuters, Associated Press, the Wall Street Journal and the New York Times. Even though “consumer spending drives the economy” is a myth, like a virus it keeps coming back.

The problem is that the media use gross domestic product (GDP) data to measure the entire economy, when, in fact, GDP measures finished, or final, goods only, and completely ignores the value of the supply chain — which is bigger than GDP itself.

By focusing solely on final spending and the end of the economic chain, GDP can sometimes be a misleading indicator of economic performance. Gross Output (GO) is a much better, more comprehensive view of total economic activity along the entire supply chain. After two quarters of lagging behind GDP, GO is again growing at a dramatically faster rate and shows a strong positive outlook for the economy in 2018.

The government is also to blame. The Bureau of Economic Analysis (BEA) buries the GO data — you can’t find it on the front page of its website, www.bea.gov. You have to locate it under “GDP by Industry.” I hope that will change soon, since GDP now is defined in terms of GO.

Business decision-making is what drives the economy and is the catalyst for inventions and innovative economic disruptions. Consumer spending is the effect, not the cause, of prosperity (known as Say’s law).

For more information, go to www.grossoutput.com.

In Search of the Bull’s Demise

Investment expert Jim Woods shares his take on whether the bull market is coming to an end.