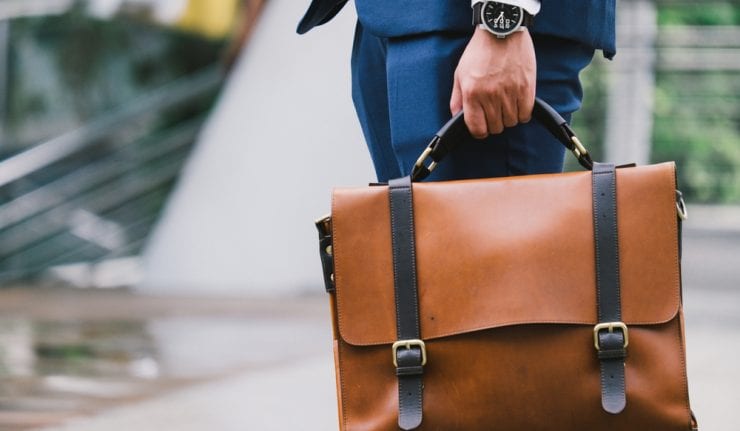 I confess that I love the bold red wines from Italy’s Piedmont region. On more than one occasion, my overindulgence in these full-bodied, fermented grapes has left me drunk with pleasure.

Interestingly, I had that same feeling yesterday when watching the overblown market reaction to the political uncertainty in the country — uncertainty that caused U.S. stocks to tumble and global and U.S. bond yields to plummet.

Yet my sense of being drunk with pleasure on Monday was free from any fermentation. Instead, I was drunk with the knowledge that I had just bought into a market sector on the cheap, and one that had been unfairly sold off on what I suspect will prove to be soon-forgotten news.

On Tuesday, KRE shares tumbled 2.4% from last Friday’s closing price as the yield on the 10-year Treasury note sank 13 basis points to 2.80%. 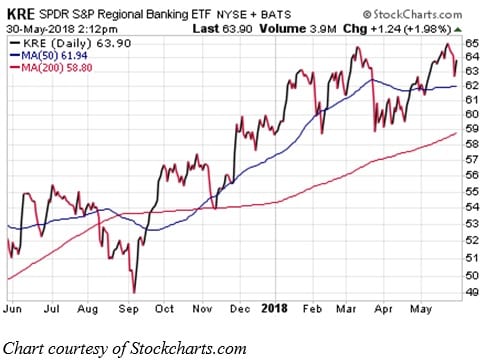 Yet, in Wednesday’s trade, KRE rebounded nicely, nearly recovering all its prior-session losses.

So, why did U.S. regional banks and financial stocks get hit hard Tuesday by, of all things, internecine Italian politics? To understand this, we need to take a quick dive into the details of domestic Italian politics to see what happened — and why it matters to financial markets.

Over the weekend, efforts to form a functioning government in Italy collapsed, and as you likely know, that proved to be the catalyst for the worst day in U.S. markets in over a month. The failure to form a government stems from what happened in March during the last Italian general election.

Here we saw two “anti-establishment” parties, the 5-Star Movement and the League, receive the highest number of votes. That caused some general concern in markets that if the two parties were to collaborate and form a functioning government, they might ultimately introduce what the markets really don’t want, and that’s a “Brexit”-style referendum calling for Italy to leave the European Union (EU).

Over the past few weeks, the League and 5-Star Movement (along with other smaller parties) have come close to reaching an agreement on forming a functioning government. This has raised fears over what cleverly has been called an “Italeave” from the EU.

Adding fuel to the fear of an Italeave was the recent nomination of an anti-EU economist as the country’s finance minister. Last weekend, the President of the Republic vetoed the finance minister’s appointment on the grounds that the Italian Constitution says Italy is in the EU. The decision sent the negotiations to form a government into a nosedive, and now it is likely the Italian Parliament will vote “no confidence” this week. This means that new national elections will be called.

This matters to markets because if anti-establishment parties like the League and 5-Star Movement gain more power from another general election, the potential for an ultimate referendum on EU membership will grow. And because Italy is the third-largest economy in the EU, an Italeave would roil the entire euro zone, and the entire global economy.

As for markets, the real impact of this Italeave fear can be seen in bonds. Italian bond yields rose sharply on the political developments over the weekend. In a flight to safety, German bund yields fell, as did U.S. Treasury bond yields (remember, bond prices and bond yields are inversely correlated, meaning if bond prices go up, bond yields go down).

For banks and financial stocks, including those in KRE, falling bond yields would compress margins in the short term, and unwind some of the rally that banks have enjoyed this year due to the expectation of continued higher interest rates, i.e. rising bond yields.

Yet, what is important to understand here, and why I think the Italian-themed selling in bank stocks will prove evanescent, is because nothing to do with Italy has altered the fact that the medium- and long-term trend in U.S. Treasury yields is higher. This trend is being driven by 1) Rising inflation and 2) Fed rate hikes.

My oft-quoted colleague, Tom Essaye of the Sevens Report, gave me some insight on this situation, saying, “If the EU begins to ease up on interest rate hikes to offset the Italian uncertainty, then that could constrain the Fed regarding the eventual number of rate hikes here at home. But that isn’t a negative for the U.S. stock market. If anything, it’d allow inflation to run.”

The bottom line here is that the drivers pushing bank stocks higher are a continuation of the “reflation trade” that I’ve been telling readers about for much of the past six months. That reflation trade includes rising inflation, rising bond yields and an increase in economic growth, bank lending and in bank bottom-line growth.

So far, nothing to do with the Italian elections threatens that paradigm. As such, when the sector sees selling like it did yesterday, well, we’re going to take advantage of the opportunity and continue going to the bank.

“Live the full life of the mind, exhilarated by new ideas, intoxicated by the romance of the unusual.”

The pugnacious writer certainly lived a full life, and part of the reason why is because he constantly sought out new ideas and new ways of looking at the world. It is this thirst for experience that was Hemingway’s real whiskey.

previous article
Applying Newton’s First Law of Motion to an ETF
next article
Will Robots Ruin Our Jobs and Income?