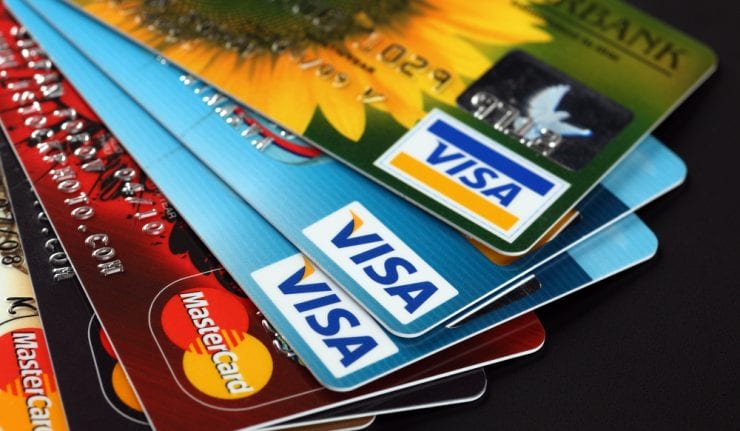 Visa Inc. (NYSE: V) is a global payment company that is expected to outperform the market during the next 12 months and provide a strong return for investors, according to Keefe, Bruyette & Woods, a boutique investment firm that specializes in financial services.

After soaring 21.80 percent so far in 2018 and 43.65 percent in the past year, the share price of Visa is showing no signs of topping out. Both Visa and its chief rival, Mastercard (NYSE: MA), have been beating the market and posting impressive sales and earnings figures.

In addition, Visa offers a 0.60 percent current dividend yield, which may appeal to income-oriented investors as they could supplement capital appreciation from the company’s rising share price with additional income. Since Visa also is engaged in an aggressive share buyback program that totaled $2 billion in stock during its fiscal second quarter ended March 31, Morningstar calculates that taking repurchased shares off the market enhances the yield for its shareholders by an additional 2.22 percent.

Will Visa Keep Charging ahead?

When the dividend yield of 0.60 percent is added to the buyback yield of 2.22 percent, it totals an annual yield of 2.82 percent. With Visa expected to reach a price target of $166 a share in the next 12 months, which is 19.89 percent higher than its $138.46 share price at the close of trading on July 16, investors in the stock would gain a total return of 21.93 percent, based on the Keefe, Bruyette & Woods forecast.

Price-to-earnings (P/E) valuations of electronic payment companies appear “elevated” and currently are above their three-year historical average, Keefe, Bruyette & Woods analyst Sanjay Sakrani wrote in a July 10 note to his clients. Valuations tend to be highest for companies such as Visa, Mastercard and PayPal Holdings Inc. (Nasdaq: PYPL) that have heightened exposure to e-commerce trends, he added.

Exclusive  Markets Steady in the Face of Putin's Shenanigans

Potential pricing increases from Visa in Europe this quarter, coupled with taking some business from rival Mastercard, could drive incremental volume and top-line growth in the near to intermediate term, Sakrani wrote. In fact, Visa seems positioned to outperform Mastercard to drive growth, but the latter company has shown a propensity to “outperform our expectations,” he added.

Visa topped earnings expectations from Keefe, Bruyette & Woods of $1.02 per share during the company’s fiscal second quarter of 2018, with core earnings per share (EPS) soaring $1.11, beating consensus estimates of $1.01. Generally accepted accounting principles (GAAP) net income for the fiscal second quarter of 2018 reached $2.6 billion, up 505 percent from the prior year’s comparable quarterly results. Net operating revenues in the latest fiscal second quarter hit $5.1 billion, up 13 percent from the same quarter a year ago and fueled by continued growth in payments volume, cross-border volume and processed transactions.

“The main reason to like Visa, as well as the entire e-payment space, is neither complicated nor subtle,” said Jim Woods, editor of the Intelligence Report advisory service, which currently is recommending the position. “Strong consumer spending in the U.S. — both online and at brick-and-mortar stores — using electronic payments has made the U.S. a virtual cashless society. This trend is only going to get bigger, and Visa is the electronic payment hub ready to surf the crest of this very long wave.”

Visa and Mastercard each have more than tripled the performance of the credit card services sector in the past three months, one year, three years, five years and 10 years. Visa arguably could be regarded as the best of the bunch, with Mastercard competing fiercely for industry leadership. 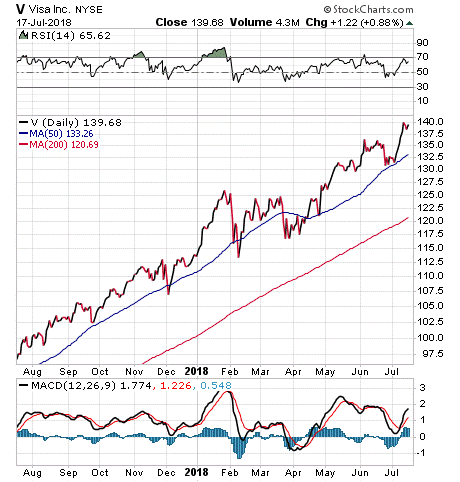 The U.S. economy is performing well amid a low unemployment rate and healthy consumer confidence, Sakhrani conveyed. In addition, he added that U.S. retail spending has stayed strong.

The credit card services industry still has the potential to generate “solid organic growth” as consumers and businesses shift from traditional forms of payment, such as cash and checks, to credit and debit cards, Sakhrani indicated.

Seasoned investment professional Bryan Perry, who is recommending Visa in his Hi-Tech Trader service, told me he likes the stock for a few compelling reasons.

Perry, who also writes the monthly Cash Machine investment newsletter, told me Visa is the biggest card transaction processor that is exposed to the U.S. market, which is aided by a “strong uptrend” in consumer discretionary spending.

“As more Americans move from cash and check transactions to debit and credit transactions, the company enjoys greater scale because of the rapidly rising number of total transactions,” Perry said. “The fees Visa collects are charged as a percentage of each underlying transaction and thus, as prices of goods and services rise, so do its margins per transaction. And Visa has the largest footprint in the migration to mobile payments and e-commerce connecting the most banks and merchants of any payments processor. It’s a juggernaut in its space that deserves the premium it trades at.”

Visa Could Be a Candidate for a LEAP

Another one of Bryan Perry’s services, Instant Income Trader, is uniquely designed to profit from expensive stocks that are close to $200 per share. If Visa’s ascent continues, it could become a prime candidate for this strategy. In that service, Perry recommends long-term equity anticipation securities (LEAPS) call options that he advises subscribers to buy first before they then enter an order to sell a corresponding number of out-of-the-money, very short-term call options on a rising stock.

His strategy is to recommend the purchase of in-the-money LEAPS that will be closely correlated to the rise of a stock, while selling an out-of-the-money call option on the same stock to capture instant income from investors who buy the latter option to take the bullish side of the trade. The strategy lets investors benefit from the ascent of a high-priced stock through the LEAPS without needing to pay upward of $200 per share.

Visa is on track to notch another year of growth in revenue, earnings and share-price appreciation. With a modest dividend yield supplemented by an enticing share buyback yield, Visa has multiple ways to keep investors contented. 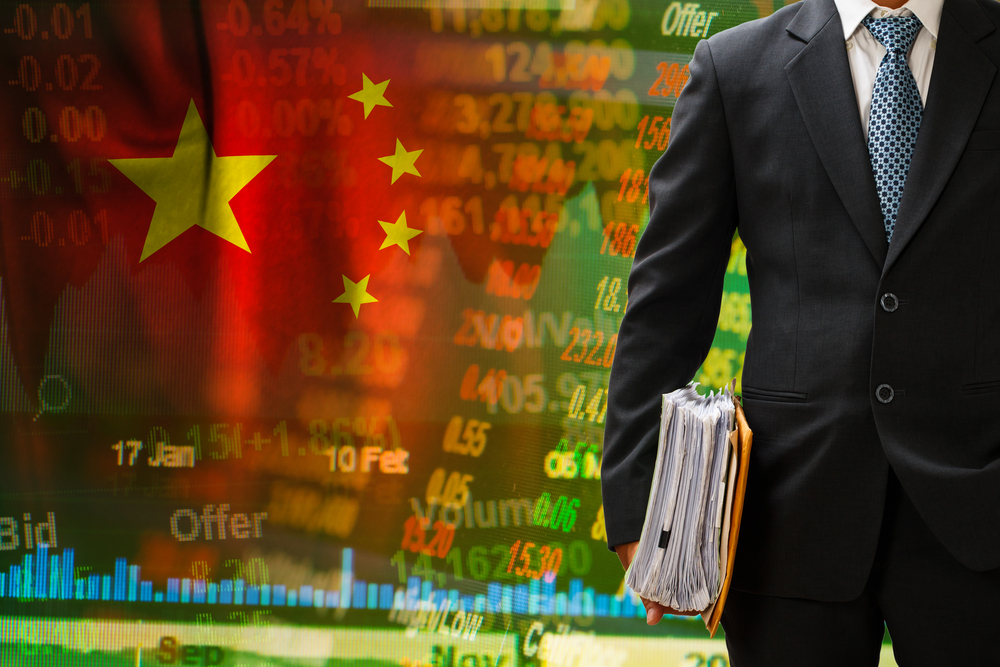 China's stock market could be the key factor in determining the outcome of this ongoing trade war.