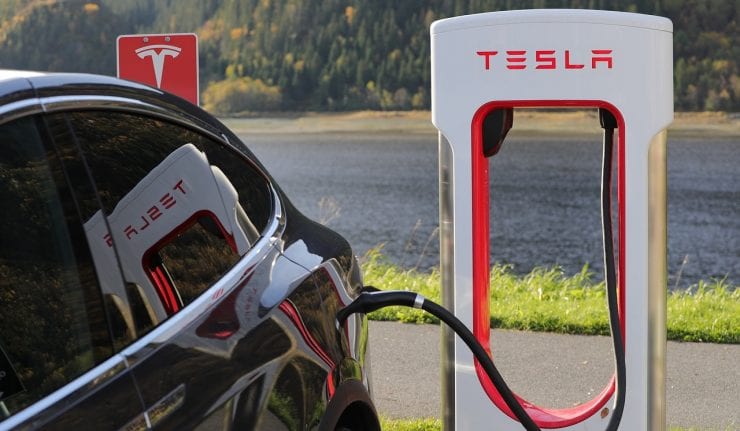 Elon Musk mystique is a phrase that aptly explains the lofty valuation that investors have given his innovative electric car company, Tesla Inc. (NASDAQ:TSLA), transcending traditional financial metrics and including the CEO’s surprise Aug. 7 Twitter announcement about potentially taking the company private.

The automobile manufacturer’s share price soared 10.99 percent on Aug. 7, when billionaire Musk tweeted that he is considering privatizing Silicon Valley-based Tesla at $420 a share, offering a premium of 19.89 percent above the company’s closing price on Aug. 6. That jump followed the company’s 16 percent climb to $349.54 on Aug. 2, after the announcement of better-than-expected second-quarter financial results late the day before.

NASDAQ halted trading in Tesla’s shares from 2:30-3:45 p.m. EDT on Aug. 7 after Musk tweeted that the funding for a privatization already has been “secured” but he added that such a leveraged buyout (LBO) would require yet-to-be-obtained shareholder approval. Based on the proposed $420 per share price, Tesla would be valued at roughly $70 billion and become the biggest LBO in history. The deal’s size would more than double the previous largest LBO of $33 billion for hospital operator HCA Inc., in a combined equity and debt deal privatization on November 16, 2006.

Musk’s Aug. 7 tweets began after the Financial Times reported that Saudi Arabia’s sovereign wealth fund took a $2 billion stake in Tesla. That fund, which reportedly now has a 3-5 percent position in Tesla, ranks it among the company’s top investors.

Despite those operational improvements, the company Musk founded in July 2003 lost $718 million, or $4.22 a share, in its latest second quarter, more than double its loss of $336 million, or $2.04, in the same quarter a year ago. Analysts differed about whether the stock’s next move should be up or down. 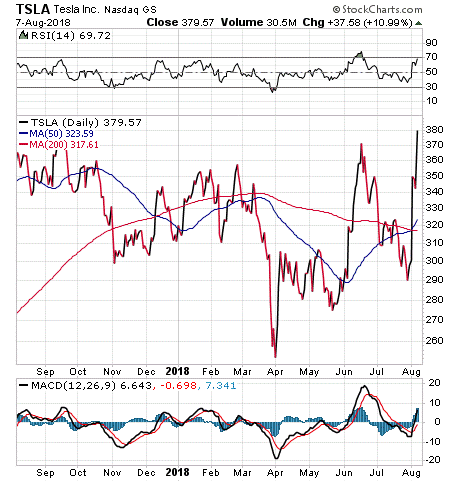 “As a public company, we are subject to wild swings in our stock price that can be a major distraction for everyone working at Tesla, all of whom are shareholders,” Musk wrote to Tesla employees in an Aug. 7 email. “Being public also subjects us to the quarterly earnings cycle that puts enormous pressure on Tesla to make decisions that may be right for a given quarter, but not necessarily right for the long-term. Finally, as the most shorted stock in the history of the stock market, being public means that there are large numbers of people who have the incentive to attack the company.”

Musk, a South African-born American businessman, offered guidance in his second-quarter earnings call on Aug. 1 that the company aims to achieve profitability next quarter.

Goldman Sachs responded to Tesla’s second-quarter results by calling it a “positive step” and boosting its six-month price target for the company to $210, up from $195, but 44.67 percent less the Tesla’s $379.57 closing share price on Aug. 7. Analyst David Tamberrino gave Tesla a “sell” rating, valuing its automotive segment $15 a share higher to $185 from $170, its Tesla Energy Segment at $20 and its SolarCity segment at $5.

“We still expect some pressure to volume and margin targets in the medium term as tax credits roll off, Model 3 mixes down and competition intensifies, according to Tamberrino’s Aug. 2 research note.

Tesla’s improved production rate of 50,000 Model 3 cars per week and plans to boost the output to 50,000-55,000 per week in the third quarter for a 75-92 percent jump from second- quarter output drew favorable reaction from auto analysts. The company’s reduced second-quarter cash burn rate of $739 million beat analysts’ consensus forecast of $901 million.

Barclays maintained its “underweight/neutral” rating and 12-month price target of $210 on Tesla after the company’s latest quarterly results in an Aug. 1 research report. Analyst Brian A. Johnson wrote that he expected Tesla to miss its third-quarter guidance of reaching profitability and positive cash flow.

A privatized Tesla would spare Musk and his employees from needing to achieve financial guidance each quarter without risking a big share-price drop. The federal government’s plan to stop providing a tax rebate of $7,500 to buyers of electric vehicles also could start to affect Tesla’s sales, he cautioned.

Shah shared that Tesla’s third-quarter guidance of delivering 80,000 vehicles would produce revenues of about $6.5 billion, up 61 percent from the same quarter of 2017, and well above a consensus estimate of $6 billion. He also noted that Tesla management said its Model 3 amassed more than a 50 percent Q2 share of the mid-sized premium car market.

Cihra wrote that Tesla’s enlarged production volumes will help stem the company’s “dramatic cash burn” and steer it to profitability in the second half of 2018.

Despite Musk’s business successes, his grand ambitions and need for billions of dollars in cash to fulfill his current pursuits with Tesla and SpaceX have turned him into a target for short sellers. Since only his Tesla business is publicly traded, short interest – an indicator of a potential plunge — is focused on that company.

Tesla ranks as the most heavily shorted company in the public market with short interest totaling $12.1 billion, according to S3 Partners, LLC, a New York-based financial technology company. That total is based on 35.35 million shares shorted as of the stock’s Aug. 6 closing price of $341.99. Short-sellers incurred a $1.71 billion mark-to-market paper loss on Aug. 2, the day after the company reported better-than-expected financial results. Out of 169.97 million shares outstanding, 20.82 percent of the total currently are sold short. 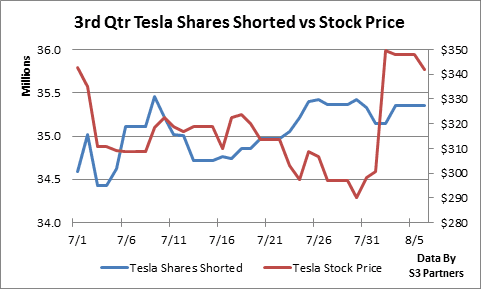 The proposed $420 per share privatization price for Tesla tweeted by Musk would cost the short sellers in the stock a loss of $4.4 billion this year, according to S3 Partners. Tesla’s Aug. 7 share-price rise gave the short sellers a $1.3 billion paper loss for the day.

The year-to-date, mark-to-market loss for Tesla short sellers though Aug. 6 reached $1.71 billion, down 16.03 percent for the year, according to S3 Partners. Of that loss, $1.54 billion of the plunge for short sellers occurred since Tesla’s Aug. 1 earnings announcement. The short sellers actually trimmed their losses by $218 million on Aug. 6, when Tesla’s share price dipped 1.78 percent to the trading day at $341.99. 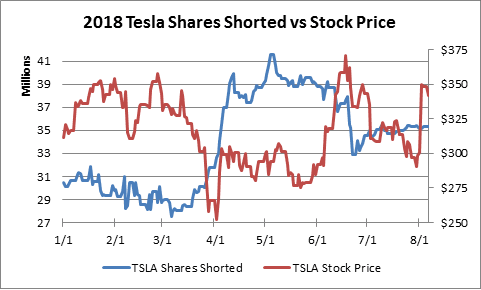 Musk has used Twitter comments periodically in the past to poke fun at short sellers who have absorbed big paper losses for betting that Tesla’s stock price will crater.

The Elon Musk mystique is built in large part from his proven entrepreneurship that includes his creation of online payment company X.com in 1999, which later became PayPal (Nasdaq:PYPL). He also founded SpaceX. Musk became a multimillionaire in his late 20s when he sold his start-up web software company, Zip2, to the search engine AltaVista division of Compaq Computers in 1999 for $307 million.

The sale price of X.com in 1999 never was divulged but Musk successfully bought back the X.com domain name last July. He provided no reason other than to tweet that he has no immediate plan for the domain but it holds “great sentimental value” to him.

The auto industry in general should be aided the rest of the year by a growing economy that will help to maintain demand and to keep many potential buyers credit worthy. The Forecasts & Strategies investment advisory service led by economist Dr. Mark Skousen has questioned Tesla’s valuation. One of Skousen’s most successful auto industry recommendations featured Ford Motor Co. (NYSE:F) and produced a 64.1% return between December 2009 and January 2011.

That profitable call stemmed from identifying the early stages of a successful turnaround at Ford by former Boeing Commercial Airplanes (NYSE: BA) CEO Alan Mulally, who joined the automaker in September 2006 when its debt slipped to “junk” status and the company was sliding toward a $12.6 billion loss that year. Ford’s share price plunged to a low of $1.01 in 2008 and the company evaded bankruptcy with Mulally putting in place a “compelling vision, a comprehensive plan, relentless implementation” and talented people who worked together to succeed.

“People appear to have never-ending faith in Elon Musk, but he’s becoming more and more like a Pied Piper, promising things he can’t deliver on,” Skousen told me before the Tesla CEO’s privatization tweet. “Despite promises of profitability year after year, Tesla continues to burn through millions in cash, and will either end in bankruptcy or more funding in hope against hope that the company will survive and prosper.”

Elon Musk Mystique Will Be Aided by GDP Growth

Tesla should gain a boost from the U.S. economy, which produced a 4.1 percent jump in gross domestic product during the second quarter of 2018, compared to the same quarter of 2017. But third-quarter gross domestic product (GDP) and corporate earnings should be “just as robust,” predicted Bryan Perry in his Cash Machine advisory service. With such sustainable momentum,  a trade war and “toxic politics” will only serve as “speed bumps,” he added.

The U.S. economy is growing well with a low unemployment rate and sustained consumer confidence, said Sanjay Sakhrani, an analyst with Keefe, Bruyette & Woods, a boutique investment firm that specializes in finance.

The Elon Musk mystique is fueling support for Tesla and his legion of fans have built his reputation to rock star status in a performance-based corporate world that seldom shines so brightly on any leader. Despite Tesla’s seemingly inflated valuation based on conventional financial measures, Musk has a proven track record for creating value in non-automotive technology companies and he seems determined to carry out and finance his dream of building cutting-edge electric vehicles as an alternative to traditional fossil-fuel cars.