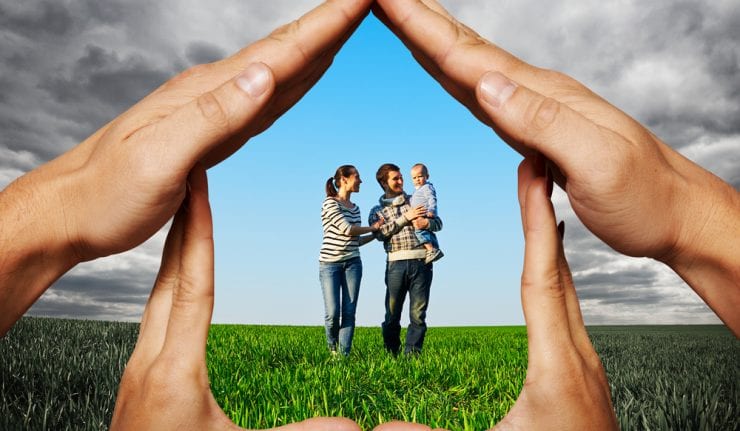 Just like the sound of a distant train, you could almost hear last Friday’s market sell-off coming.

As the S&P 500 approached record high territory, the talking heads on CNBC were getting ready to snap their party hats on, but then a funny thing happened. Goldman Sachs issued a Sell recommendation on bellwether technology company Intel (NASDAQ: INTC), sending the chip sector spiraling lower while setting the tone for a market drubbing.

It was only 10 trading sessions ago that the Nasdaq tanked 300 points in 48 hours when investor fears arose that the so-called FAANG stocks — Facebook (NASDAQ: FB), Amazon.com (NASDAQ: AMZN), Apple (NASDAQ: AAPL), Netflix (NASDAQ: NFLX) and Alphabet/Google (NASDAQ: GOOG) — had hit the wall. At that time, shares in two FAANG members, Netflix and Facebook, were slammed after failing to live up to Wall Street’s second-quarter expectations.

Since then, both Amazon.com and Apple have traded to new all-time highs, with Alphabet/Google not far behind, helping to refortify the FAANG trade. As a result, the S&P 500, Nasdaq and Russell 2000 have all came within 10 points of posting new record highs. Due to a very strong dollar, only the Dow is lagging right now.

What we’re seeing is an incredible snapback rally with the tech sector fully leading the way and Apple, Amazon and Microsoft ranking as the three top weightings in the Nasdaq, composing 31.26% of the index. The top 10 holdings make up 55.69% of the index. The other seven members include Alphabet/Google, Facebook, Intel (NASDAQ: INTC), Cisco Systems (NASDAQ: CSCO), Netflix and Comcast (NASDAQ: CMCSA). Knowing these top ten components are responsible for doing the heavy lifting, when they top out over the near term, a broad market pullback can be expected.

I can say with some level of certainty that of the top ten holdings, only Apple, Amazon, Microsoft (NASDAQ: MSFT) and Alphabet/Google are technically strong. However, they are also very overbought on a short-term basis. So, with the Nasdaq trying to establish a new all-time high, it is doing so on four of the most crowded trades within the entire market, and at prices where each of this fab four are already technically extended and are elevating on declining daily volume.

In my view, this is a recipe for a mid-August pullback in the tech-rich Nasdaq. Because the S&P 500 is much more diverse in weighting, it might hang on better, but is still vulnerable. 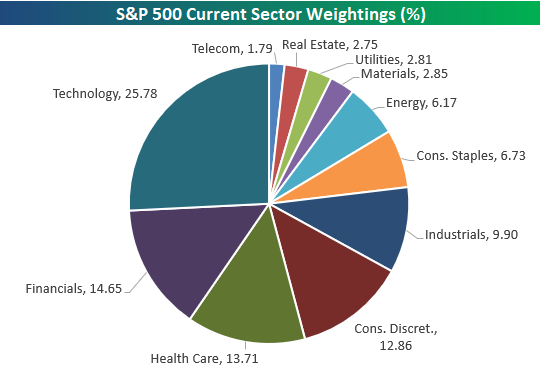 Over time, the S&P 500 Technology Sector weighting has increased, only being exceeded by the 2000 crash when the sector was 35.0% of the S&P. Its average going back 30 years has been about 15.7%, so here again we see that Wall Street’s love affair with technology has the market’s benchmark index depending heavily on the tech sector. 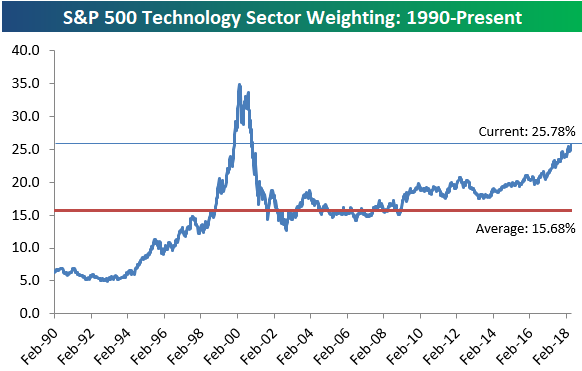 Back when investors were partying like it’s 1999, many of the companies that comprised the Nasdaq were trading at ridiculous valuations that have only grown into their more responsible price-earnings (P/E) ratios. When the Nasdaq peaked in 2000, the list of the top 15 stocks in the index includes several of today’s larger components. Microsoft was king, followed by Cisco, Intel, Oracle (NYSE: ORCL) and Dell (NYSE: DVMT).

History has a way of repeating itself, especially when it comes to the stock market. It just goes to show how that even relatively trusted list of stocks can get overheated relative to historical value. While forward earnings growth looks good, today’s Nasdaq is trading at the upper end of its historical range and easily could provide for a mid-August pullback that refreshes the longer-term bull trend.

To protect recent gains and insulate against downside risk, investors and traders can utilize the buying of calls on the CBOE Volatility Index (VIX) or buy shares of the ProShares Ultra VIX Short-Term Futures ETF (UVXY) or the iPath S&P 500 VIX Short-Term Futures ETN (VXX). For those investors seeking an unleveraged hedging tool to utilize, they can work with the ProShares Short S&P 500 ETF (SH), which represents a 1:1 inverse relationship with the SPDR S&P 500 ETF Trust (SPY).

And while there are a slew of other portfolio hedging options and straight out bearish instruments to choose from, these are what I gravitate to if I’m looking to short the market or put on some protection. The risk/reward proposition of laying on a market hedge looks attractive to me. For Cash Machine high-yield investors, we’ve already added portfolio insurance in the event the market decides to consolidate.

Check out Cash Machine by clicking here to learn how I’ve tailored a diversified portfolio of income generating assets that boasts an 8.65% blended current yield among 24 separate holdings. At the same time, investors can follow my lead about when and how to manage market volatility. Indeed, volatility can bring harm to one’s portfolio and the next four to six weeks could be quite challenging. However, if collecting almost 9% in a hedged portfolio is appealing against a vulnerable market landscape, then having Cash Machine at work makes for no worries and a smooth ride.

previous article
What is a Call Option? Understanding Its Definition
next article
Tesla Privatization Plans Include Saudi Sovereign Fund