American Exceptionalism: Why Wall Street Outperforms All Other Markets 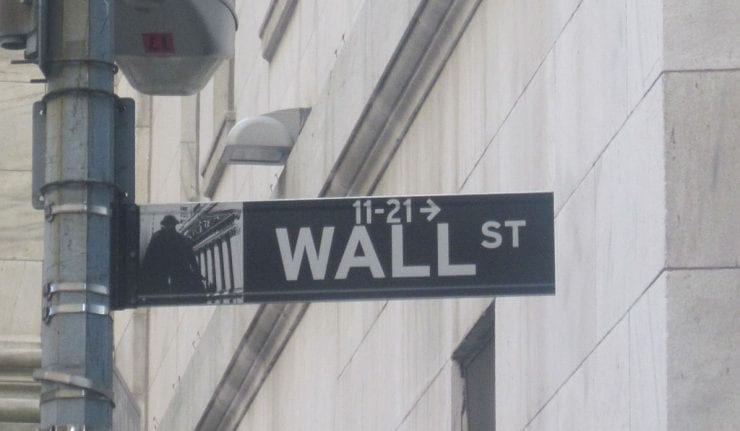 In a book published in 2002, “Triumph of the Optimists: 101 Years of Global Investment Returns,” three British professors at the London Business School came to two major conclusions:

First, in all 16 countries (primarily in Europe and North America) in their survey, stocks outperformed bonds and gold over the long term and enjoyed a long-term upward tre wars, the Great Depression, runaway inflation, currency crises and other unstable conditions.

Second, U.S. stocks outperformed the rest of the world on a long-term basis. 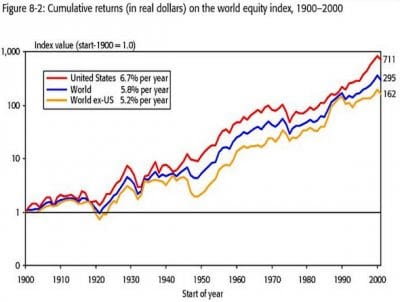 Since the start of the new millennium, nothing has changed. The U.S. stock market continues to outperform the rest of the world.

Last month, the Brookings Institution just released a blockbuster report on the global economy and markets, concluding, “In dollar terms, U.S. stock market performance leaves all other countries in the dust.” Indeed, Wall Street has outperformed EVERYTHING this year except oil and marijuana stocks.

While the U.S. market is ahead 6-14% this year, depending on which index you use, other markets generally are all down:

And other markets are also lower:

Now you can see why we are 100% invested in U.S. stocks in my newsletter, Forecasts & Strategies — and outperforming even the U.S. stock indexes!

However, Brookings notes with some alarm the disconnect between the stock market and the economy. It writes, “China and India have vastly outshone advanced economies in terms of growth. By most measures, GDP in these countries has at least doubled since 2007. In contrast, despite its economy expanding by only 18 percent over the past decade, U.S. stock markets have outperformed those of both China and India. China’s stock markets are well below their 2007 levels; stock markets of many other emerging economies have struggled as well.”

Why does the United States outperform all the rest? Nobody knows for sure, but I suspect it’s because America is still the engine of technology and entrepreneurship. The best and the brightest show up on our shores and succeed in Silicon Valley and the rest of the country. America is still #1 in technology, patents, etc.

You Blew It!
Nobel Prize for President Trump — in Economics? 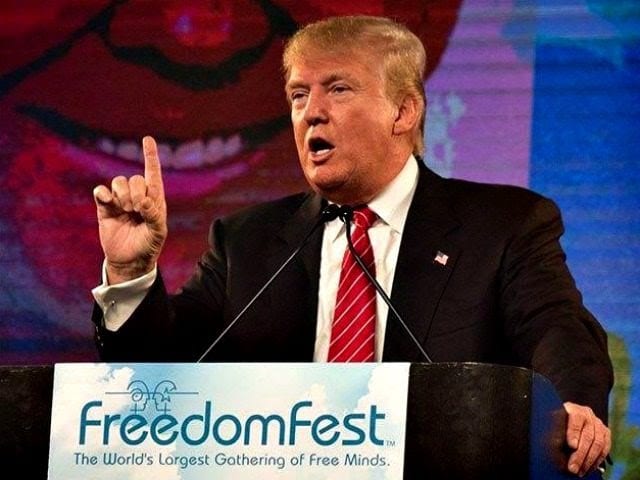 Donald Trump speaking at FreedomFest in 2015. Do his policies deserve a Nobel Prize?

I was shocked to see that supply-side economist and friend Steve Moore “seriously” suggested that President Trump be given the Nobel Prize in Economics. Here’s the link to read the story.

Did Moore misspeak? Did he possibly mean the Nobel Prize in Literature… for fiction?  🙂

Talk about trying to ingratiate yourself to the president….

But maybe there’s a method to Moore’s madness: Perhaps Moore wants to make the economics prize equal to the Nobel Peace Prize, which is already a joke.

If Moore is serious, then he’s terribly misguided or ill-informed about the Nobel Prize in Economics. It is given to professional economists who have made major contributions to economics, not to politicians who have a mixed message of sound and unsound economic policies.

President Trump may deserve credit for pushing through tax cuts and deregulation, but he’s woefully ignorant about trade policy.

And since when do you give a Nobel Prize in Economics to a government leader who is running trillion-dollar deficits during an economic boom? Even Keynesians think we should be running surpluses right now. The way we are piling up debt in this country, we are heading for trouble.

And when interest rates rise and a debt bomb explodes, we may well want to give President Trump and past U.S. presidents who share responsibility an “ignoble” prize in economics.