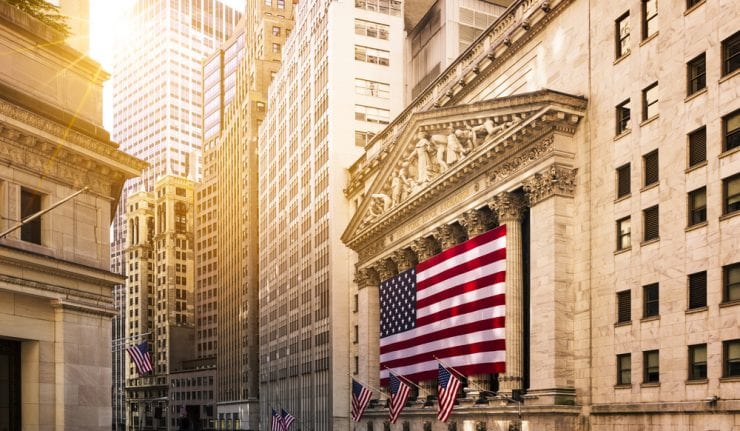 The strength of the U.S. dollar is a serious underpinning, even though its price action has backed off recently after a year-to-date advance of around 10%. In the world oft developed currencies, that increased valuation is huge. The chart below of the U.S. Dollar Index shows how the greenback has done against the five major developed country currencies that include the euro, yen, pound sterling, Canadian dollar and Swedish krona. One can see how the euro is heavily weighted in the Dollar Index (57%). Though the dollar’s rally vis a vis these currencies has been impressive, it doesn’t put any color on what has and still is taking place with the pain being exacted on emerging market currencies. It will be interesting to see where the dollar trades going forward given that the largest weighting in the euro represents a region where growth from the 19 countries that make up the euro zone slowed to an annualized rate of 1.4% in the second quarter from 1.5% in the first quarter. It was the slowest expansion in three years. Fear that new tariffs will slow global commerce has been weighing on the outlook in the Europe, which is heavily dependent on trade.

Among emerging market currencies there is chaos, confusion and fear that is driving an exodus from those markets into the U.S. dollar. Below is a table of the countries that make up the MSCI Emerging Market Currency Index. The Brazil real, Russian ruble and Chinese renminbi comprise 49.8% of the entire index. Brazil is the eighth-largest economy in the world and is in urgent need of addressing its shaky public finances. With over $1.5 trillion in public debt, a Brazilian debt crisis has the potential to cause real waves in the global financial system. As for China, its government is reported to be manipulating its currency.

Unbeknownst to most investors, India has the second-worst debt problem in the world right behind Italy. Bloomberg reports that India’s $1.7 trillion formal banking sector is presently struggling with $120 billion in bad loans, most of which are concentrated within its state-owned banks. With 2018 growth slowing to 6.7% from 7.1% in 2017, the trend for a further rise in bad loans looks worse.

The black line across the bottom of the chart below is a key 5-year technical support line that was breached earlier this month. Having already shed 7.6% of its value since May, a further 6.3% dip would take it to its next key support level of 1,506. This bears close attention as a further run on EEM currencies is very possible over the short term.

A look at global 10-year bond yields supports the appeal of the U.S. 10-year Treasury Note that traded last Friday at 3.00%. When compared what’s available in Europe, Greece’s 4.04% bond yield is the only one that is higher than the 3.00% yield of U.S. 10-year Treasury notes. Brazil’s 12.37% bond yield is trading like junk, with Mexico’s bond yield at 8.01% and India’s bond yield at 8.12%. It is amazing that the 2.98% yield on Italy’s bond debt is trading in line with U.S. debt. To that point, most of Italy’s largest banks are swimming in emerging market debt where defaults are expected to rise dramatically in 2019, if economic conditions don’t materially improve. 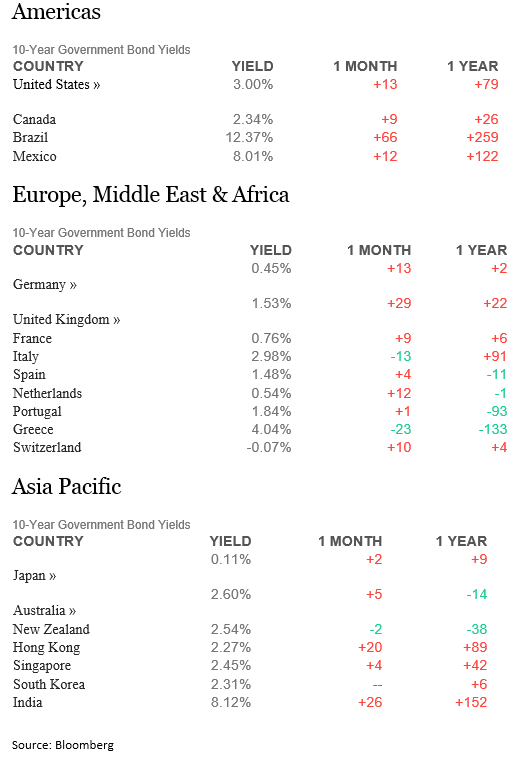 Foreign holdings of U.S. securities rose to a record $18.4 trillion as of the end of June, according to data released by Treasury Department. An annual survey of foreign portfolio investments, including U.S. stocks and short- and long-term debt, showed holdings rose by 8%, up from $17.1 trillion a year earlier. Japan was the largest investing country with $2 trillion, followed by the Cayman Islands at $1.7 trillion and the United Kingdom and China at about $1.5 trillion each. Luxembourg rounded out the top five at $1.4 trillion.

Breaking it down, foreign holdings of U.S. equities climbed to $7.2 trillion, as of June 30, from $6.2 trillion a year earlier. Short-term debt holdings increased to $954 billion from $909 billion, while long-term debt holdings rose to $10.3 trillion from $10 trillion. The chart below shows how much of the accumulation in U.S. equities is in the form of exchange-traded funds (ETFs). It is hard to imagine the slope of this chart changing much, since there has been no sign of a deal with China to slow the increases it faces in retaliatory U.S. tariffs, in addition to U.S. sanctions applied aggressively against Russia and Iran. Plus, President Trump is threatening to pull out of the World Trade Organization if it doesn’t improve its treatment of the United States.

And just two more items of note as to why the bull market will very likely go into extra innings: stock buybacks and rising dividends. Stock repurchases could reach a record $1 trillion by November, according to Trim Tabs. And based on third-quarter earnings projections of 19.9% by FactSet, as of Sept. 14, there is every reason to believe that further dividend increases will keep the slope of quarterly payouts to shareholders up and to the right. 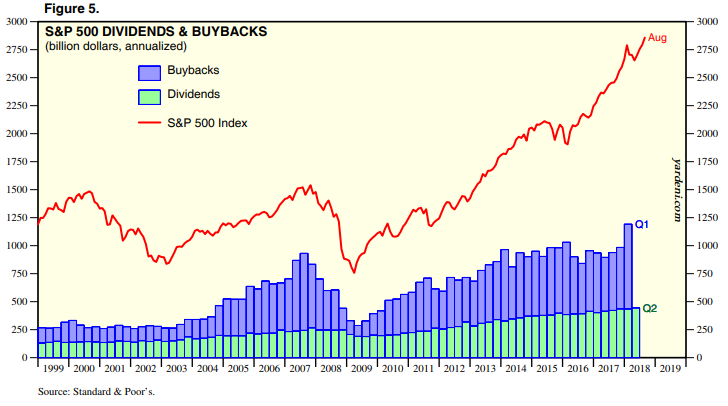 With that said, my Cash Machine advisory service is a natural fit for income investors that want to invest in America and get paid a blended yield of 8.4% in a diversified portfolio of appreciating assets. Compared to the 1.8% yield for the S&P 500, 3.1% for 30-year Treasuries, 2.55% for 1-year CDs or 1.90% for money markets, my dividend and growth portfolio is crushing these payouts by almost 3-to-1 with the underlying assets being fully exposed to the benefits of the current bullish growth trend for the U.S economy. Click here to sign up for Cash Machine today. Outsized income is a huge challenge for most investors that need to keep pace with the rising cost of living and Cash Machine, is in my view, a potential solution to consider.

Exclusive  How to Destroy American Ingenuity in One Easy Lesson