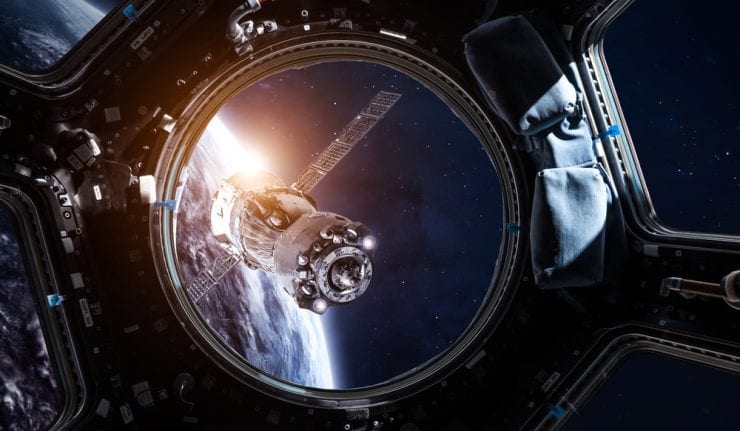 “Quick, check out the Joe Rogan Podcast on YouTube. Elon Musk is smoking a pot!”

That’s the frantic text I got from an investor friend of mine who knows I’m a fan of both podcaster, comedian and UFC commentator Joe Rogan and Tesla Motors (TSLA), SpaceX and The Boring Company founder and CEO Elon Musk.

Of course, what that friend didn’t know is that I already was watching the live-streamed YouTube broadcast on Sept. 6, and I saw the now-infamous incident where Rogan and Musk passed each other a “blunt,” i.e. a combination of rolled up tobacco and marijuana, and then proceeded to smoke it.

Now, when I saw this incident, the first thing I thought about is how much fire Musk was about to come under from the investing public. Why? Well, because this “bizarre” behavior as many have characterized it, seems to fit into a wider pattern of Musk’s recent penchant for controversy.

In August, the Tesla chief sent out a tweet that said he was considering taking the electric car and battery technology company private.

That tweet caused TSLA shares to tumble, and now there’s a Department of Justice investigation and a Securities and Exchange Commission probe into the incident for possible criminal and civil legal action.

Interestingly, the Musk pot incident, along with the eminently memorable screenshot of tobacco and pot smoke wafting around Elon’s head as he spoke with Rogan, caused an even bigger decline in TSLA shares.

The stock sank about 6% the day after the incident, which was Tesla’s worst day of trading since 2016. Musk also lost two key Tesla executives, who both decided it was a good day to tender their respective resignations.

Now, with all of this controversy, bizarre behavior and potential criminal and/or civil cloud surrounding the eccentric billionaire, why would anyone want to write an article titled, “In Defense of Elon Musk”?

Well, first, it is the purpose of this publication to take you, the reader, on a mission to peel back the surface layer on issues and dig into the deeper meanings associated with these types of situations.

Second, I also admit that I have a love and admiration for men of genius… and to be certain, Elon Musk is a true genius.

During the growth spurt of the internet and e-commerce in the late 1990s, Musk and his partners, including fellow eccentric billionaire and early investor in Facebook (FB) Peter Thiel, figured out how to make electronic payments palatable and easily adoptable to both end users and merchants. The result was online payment giant PayPal (PYPL).

After selling PayPal to eBay (EBAY) in 2002 for a cool $1.5 billion, Musk turned his entrepreneurial focus on transportation. He set out to create an all-electric car that not only didn’t pollute the environment the way fossil fuel vehicles did, but that also surpassed the finest luxury automobiles on the market in terms of ride, feel and driving experience.

Guess what… he did that, too.

When Musk looked at the space program and the virtual stagnation that NASA was experiencing, he started his own rocket company, SpaceX, with the goal of making commercial space flight a reality. Ultimately, the goal of that space flight is to lead to the colonization of Mars, making us a multi-planet species.

Oh, and then for good measure, Musk decided to take on the world’s traffic and gridlock problems by starting the ironically named, The Boring Company.

In my hometown of Los Angeles, Musk already has begun the process of exploring how to create a tunnel system below the earth’s surface in an attempt to relieve the pernicious and time-crushing task of getting around one of the most congested cities in the world.

Will he do it? I’m certainly not betting against him!

Of course, my wider, deeper point here is that Elon Musk isn’t the kind of person that sees a problem and simply bemoans its existence. He’s the type of eccentric genius who sees a problem as a catalyst for solutions, and as an opportunity to reshape reality in a manner that he thinks will enhance the world and make it a better place for us all.

More importantly, he is the kind of man who takes on the responsibility of thinking deeply about these problems, and then trying to develop real-world solutions using reason, rationality, science, technology, innovation, capital — and a whole lot of creative intellectual effort.

In short, Elon Musk is the kind of genius you might find in an Ayn Rand novel.

Just like the eccentric architect Howard Roark in “The Fountainhead,” and John Galt, the mysterious inventor of the motor that can power the world, in “Atlas Shrugged,” Musk is a man operating with a vision of his own making.

Has Elon Musk made missteps in life? Of course, we all have.

Yet, what very few of us can do is take our mind, apply it to problems of societal magnitude of the sort Musk has and actually come up with — and then also monetize — the kindling of a solution to these great challenges.

So, regardless of an ill-advised tweet, or the public consumption of a legal, though still frowned upon, recreational drug, I say Elon Musk deserves not only a strong defense, but deeper praise that’s worthy of a true industrial hero.

Do not lose the forest for the trees.

ETF Talk: Gain Diversified Exposure to Commodities with This Fund

The VanEck Vectors Natural Resources ETF (HAP) is a fund that tracks an index of companies involved in the production and distribution of commodities and commodity-related products.

HAP tracks companies in the following six sectors: Agriculture, Alternatives (Water & Alternative Energy), Base and Industrial Metals, Energy, Forest Products and Precious Metals. Within each sector, HAP weights companies by their market caps. The fund takes sizable positions in the oil and gas industry, as well as the metals and mining space, while still offering decent overall exposure.

For a sector breakdown, HAP is 34% invested in basic materials, 25% in oil and gas, 21% in consumer goods and 13% in industrials. HAP is considered by many analysts to be a good guard against inflation, thanks to the nature of commodities and the fund’s capability to often generate better returns than fixed-income investments.

As of Sept. 19, HAP is trading above both its 50-day and 200-day moving averages. Based on this and other technical indicators, several investment sites, such as investing.com, have rated HAP as a “buy.” However, at least one site also has indicated that HAP is in an overbought state, advising “caution” for investors who are considering going long in the fund. 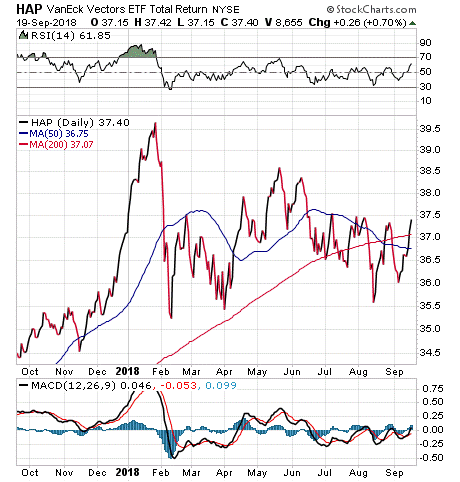 Investors interested in a more diversified approach to commodities can do their diligence on VanEck Vectors Natural Resources ETF (HAP) to see whether it is a suitable fit for their portfolios.

“To avoid criticism, do nothing, say nothing, and be nothing.”

The easiest thing to do in life is to criticize. After all, you don’t have to do the initial hard work, all you have to do is wait for others to do the work, and then simply point out what they’re doing wrong. Yet, what I hope you remember is that it’s those that don’t do anything that are always the ones that try to bring others down. My advice is to make sure you don’t let them bring you down, and to make sure you’re not the one who lives life as a critic.

previous article
The Difference Between SPX and SPY – Options Trading
next article
Ten Years after the Financial Crisis: Can It Happen Again?

share on:
Exclusive  Victory Belongs to the Most Tenacious