The Real Question Is What Took So Long 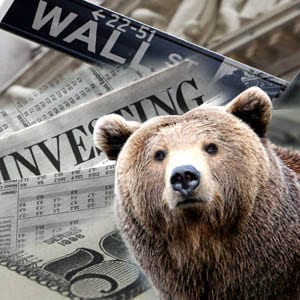 Stocks got downright ugly on Wednesday. So much so that going into the final half hour, the Dow Jones Industrial Average had plunged some 720 points, or more than 2.7%.

What makes today’s sell-off more uncomfortable and potentially worrisome going forward is that it comes after more than a week of strong selling, and one that’s shaved off more than 4% of the Dow’s value over the past five trading sessions. And it’s not just the Dow. The S&P 500 and NASDAQ Composite are similarly lower, with the tech-heavy NASDAQ leading the charge into the red and down nearly 7% over the past week.

And speaking of tech, that sector is down some 3.5% today, as the Technology Select Sector SPDR (XLK) now has plunged precipitously below support at the short-term 50-day moving average. So, what’s the main culprit causing investors to de-risk in droves here?

Well, the first cause is the one grabbing most of the financial news headlines, and it’s the sharp and sudden rise in Treasury bond yields. The yield on the benchmark 10-Year U.S. Treasury Bond now is at 3.22%, a level not seen in about seven years.

Then we have a Federal Reserve that has stayed committed to raising interest rates. Recent comments by Fed Chair Jerome Powell, in which he said that the Fed could go “past neutral” and that he thought rates were “a long way from neutral at this point,” raised concerns that monetary policy would become too strict, and that this could be a chokepoint for the economy.

Another reason for the market tumble was Monday’s earnings warning from bellwether chemical firm PPG Industries (PPG). The makers of specialty paints and coatings warned that earnings would be weaker in both Q3 and Q4. More importantly, the company cited every worry that keeps market analysts like me up at night, such as higher input costs and reduced international demand for its products weighing on its bottom line.

Rising interest rates are one thing, but markets can handle that if the reason for rising rates is a stronger U.S. economy, strong jobs growth and a robust U.S. dollar. Yet if corporate earnings from industrial bellwethers are about to come in substantially softer than expectations, then that means that one of the key pillars that’s buttressed this rally for the past year and a half now is under threat.

Over the next couple of weeks, we’ll see the actual third-quarter numbers coming from many of Wall Street’s biggest names. If the collective corporate outlooks are timid, weaker than expected or just too cautious, then that will be a reason for more risk-off trading in this market.

That means you should expect to see some of the froth come off the highest-valuation sectors, i.e., technology, semiconductors, biotech and other growth sectors. That also means we expect to see flight-to-safety sectors such as utilities, consumer staples and value stocks outperform. That’s largely the rotation we saw today, and if this continues, it will change the complexion that’s colored the 2018 market.

Finally, I had a friend call me mid-morning (when the Dow was “only” down 500 points) and ask me why this sell-off was taking place.

My answer was that the real question he should be asking was why it took so long for a pullback to finally occur.

Markets don’t keep making record highs forever. I know it may seem like that if you suffer from recency bias in the 2018 market, but remember that volatility, fear and accelerated selling are all part of the normal ebb and flow of markets.

Does it feel bad to be long stocks on a day like today?

You better believe it does! I know I’ll be reaching for the Advil later today. Yet when my headache subsides, and the markets are closed, I’ll also be digging through the detritus, looking for great companies selling at a discount compared to where they were just a week ago today.

On days like today, wouldn’t it be nice to know you had a plan in place to tell you if it’s time to sell stocks? That’s what subscribers of to my Successful Investing advisory service have, and it’s why I think they’ll be sleeping a lot better tonight than investors who are just rolling the dice. To find out more, check out Successful Investing today!

Have you ever wanted to peek into the mind of a West Point graduate?

Have you ever wanted the opportunity to converse with a prominent precious metals dealer about how he got to where he’s at, and what drives his success?

In the latest episode of the Way of the Renaissance Man podcast, I accomplish both of these missions via my conversation with Rich Checkan, West Point graduate, former U.S. Army officer and President and COO of Asset Strategies International, which in my opinion is the best precious metals firm in the business today. Some of the topics we cover in this episode include:

I loved my talk with Rich, as we share a worldview that has been molded by our military service, our love of success and the underlying Renaissance Man ethos that animates us both. If you’ve ever wanted to listen in as two men discover their common values, then this episode is for you.

Watch My Interview on Unlock Your Wealth Today

Last week, I was a guest for the entire episode of the outstanding and highly recommended internet TV show, Unlock Your Wealth Today.

Hostess extraordinaire Heather Wagenhals asked me to help kickoff her newest season on the show, and I was both flattered and honored to do so. During the show, we discussed the markets in the third quarter, and I offer a few prognostications on what’s in store for the fourth quarter.

We also reflect on my previous appearance on Unlock Your Wealth Today in July, where I expressed a bit of concern over, of all things, the high personal debt history of what was then Supreme Court nominee Judge Brett Kavanaugh. Other topics of note discussed in this show are my thoughts on the tumult at Tesla Motors (TSLA) and Elon Musk’s ousting as chairman; the ongoing Facebook (FB) data breach issues and shareholder concerns; and the important role of concepts such as acceptance of reality and positive affirmations in life.

Plus, find out why I chose to wear a t-shirt on a financial news TV appearance, and see why the message the shirt conveys can help save lives.

If you’re in the mood to watch an entertaining, educational and lively discussion, check out the season two premiere of Unlock Your Wealth Today.

Achievement Is a ‘Brees’

“You can accomplish anything in life if you are willing to work for it.”

On Monday, New Orleans Saints quarterback Drew Brees broke the record for the most all-time NFL passing yards. It’s a remarkable achievement, especially for an athlete who experts say has relatively average physical skills and stature compared to other greats who’ve played the position. Perhaps one reason why Brees broke the record is the message he chose to deliver to his children immediately after throwing the record-breaking pass, which is today’s quote.

Of course, hard work doesn’t guarantee you’ll reach the pinnacle of success the way Brees has. Good luck and fortuitous serendipity play a big role. But ask yourself this: What have you ever done in life of any significant value that hasn’t involved a good dose of very tough, very demanding work? I dare say the answer is not much. Kudos to Drew Brees for choosing to emphasize that message to his children, and to America, after such a remarkable achievement.

previous article
A Floating-Rate Bond Fund for the Rising-Yield Environment
next article
Is the Stock Market Going to Crash?