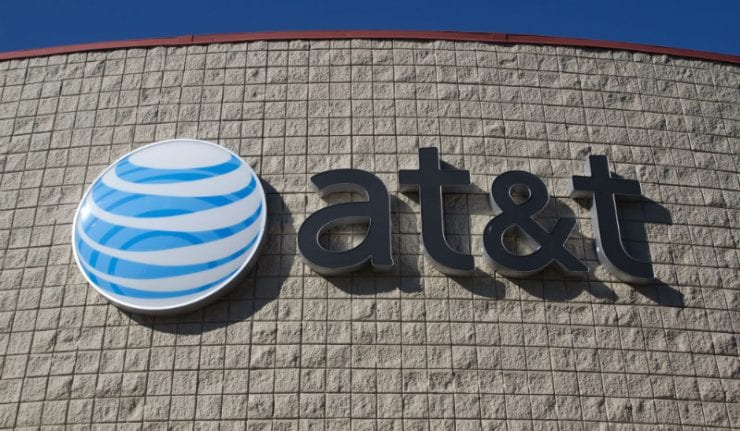 AT&T Corp.’s stock price is partly supported by a dividend yield of nearly 7 percent, but the company faces daunting competition in its video and entertainment business segments that limits its potential for capital appreciation.

AT&T’s stock price dropped 3.49 percent through Feb. 5 after releasing its financial results on Jan. 30, when its revenues of $48.0 billion for the last three months of 2018 fell short of consensus analysts’ estimates of $48.5 billion. The company’s Q4 2018 adjusted earnings per share (EPS) of 86 cents beat analysts’ estimates of 78 cents but AT&T’s management provided pedestrian guidance of low single-digit-percentage adjusted EPS growth this year.

Critics complain that AT&T (NYSE:T) has been less focused on spending money to offer cutting-edge fifth-generation (5G) telecommunications services than U.S. wireless industry leader Verizon Communications Inc. (NYSE:VZ). Another competitive threat is that streaming video services collectively are devoting billions of dollars to acquire and to create content that has erected another marketplace battlefront for AT&T to fight.

AT&T’s top priority for 2019 is driving down the debt from its Time Warner acquisition in June 2018, said AT&T’s Chairman and CEO Randall Stephenson during the company’s fourth-quarter and full-year 2018 earnings call on Jan. 30. Of course, cutting debt from that purchase also was a key AT&T priority for 2018 and the markets failed to reward shareholders for management’s efforts. 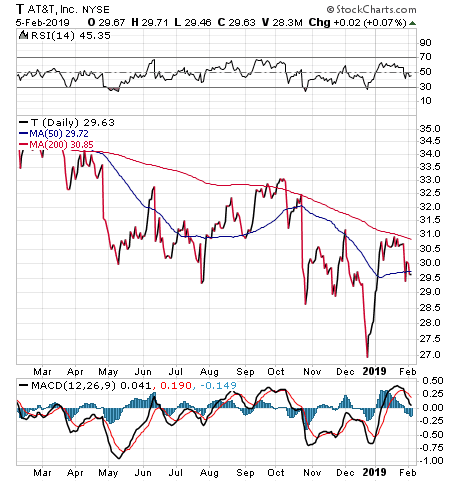 AT&T’s rising dividend policy and track record of increased payouts qualify it as a so-called Dividend Aristocrat. Dividend Aristocrats form a group of S&P 500 stocks that have boosted their annual dividend payouts for at least 25 consecutive years and whose individual market capitalization exceeds $3 billion.

Despite offering a forward dividend yield of 6.89 percent, AT&T’s stock price has faltered during the past year. The company’s price-to-earnings (P/E) ratio currently is 10.37, while the consensus forward P/E of analysts for AT&T is 8.33, according to Morningstar.

In addition, AT&T’s consumer and entertainment segment accounts for about 25 percent of its revenue, including the DirecTV satellite television and consumer fixed-line businesses. WarnerMedia, formerly Time Warner before its acquisition by AT&T for $85 billion, contributes roughly 18 percent of revenue with media assets that include HBO, the Turner cable networks and the Warner Brothers studios.

“AT&T has confused investors because it is trying to change from being a utility to being a media and entertainment conglomerate,” said Bob Carlson, who leads the Retirement Watch investment advisory service. “What’s making that worse is that the utility parts of the business, cable television and wireless telephones, were supposed to fund the growth of the media and entertainment businesses.

“But cash flow from the utility businesses is declining faster than expected. Though AT&T continues to have a high-dividend yield, it’s not for conservative investors who traditionally invest for yield. There’s too much instability in the current business model.”

Hilary Kramer, a seasoned Wall Street professional who leads the Value Authority, Turbo Trader and Inner Circle advisory services for individual investors, said, “Nobody expected a life-changing growth outlook here, but reaction shows that Wall Street is running out of patience with the company’s efforts to turn the cable TV business around. People are cutting the cord. It’s a deteriorating market and the question of whether AT&T can stabilize subscriber numbers remains open.

“The operative word from the conference call is ‘stabilize,’ not ‘grow’ or ‘expand.’ I’m cautiously optimistic that management can contain the bleeding. Evidently other investors are pessimistically cautious.”

The stakes are high for AT&T because growth targets in the low-single-digit percentages are so low, Kramer said. As management confirmed on the call, the best AT&T can do even after the Time Warner merger is 3 percent earnings expansion this year, she added.

“More realistically, 2 percent would be extremely welcome and there’s a strong possibility that we’ll end up with zero, if enough people who migrate to streaming services realize they don’t need DirecTV for anything but live sports and local news,” Kramer said. “The migration is real. It’s why stocks like Netflix have so much sizzle. With AT&T, on the other hand, one of the biggest media mergers in history barely balances the bleeding. While there are bright spots here, there isn’t a lot of upside. Sure, the 6.6 percent yield is attractive, but ordinarily we’d prefer the dividend to be a base for capital appreciation. Here it looks more like a ceiling on what investors can expect for the foreseeable future.”

AT&T Stock Price Is Vulnerable Amid Transition to 5G Rollout

The introduction of 5G services by wireless providers is important to offer consumers much faster data download and upload speeds, wider coverage and heightened stability in connections. The 5G technology will make better use of the existing and limited radio spectrum to allow more devices to access the mobile internet simultaneously.

Rival Verizon achieved several 5G firsts in 2018. It became the first provider in the world to commercially offer 5G to consumers. Verizon officials said they are aiming to give their customers a best-in-class and game-changing experience on its networks. Verizon plans to devote $17-18 billion to capital expenditures in 2019 that will include expanded commercial launch of 5G.

AT&T’s dividend yield of nearly 7 percent is enticing, but odds are good that the slight edge on that front won’t last long with Verizon’s long-term growth and 5G potential fueling its future.

“There is a ton of new competition in the video world that has directly impacted the pay TV side of AT&T’s business,” said Jimmy Schaeffler, a senior analyst at the Carmel Group, a telecom industry research firm in Carmel-by-the-Sea, California. “Cord-cutters and cord-never participants are putting pressure on the traditional pay TV model because they are not buying or not buying as much. Pay TV subscriber numbers for past five years have been going down, down, down.”

Super Bowl LIII, played on Feb. 3, provided an example of how broadcast TV essentially is “cannibalizing itself,” Schaeffler said. Traditional broadcaster CBS (NYSE:CBS) allowed ads from streaming media companies, such as Netflix (NASDAQ:NFLX) and Amazon Prime (NASDAQ:AMZN), to promote their video programming. Every streaming media show that a consumer watches is one that will not be viewed on broadcast television, he added.

“They are offering low prices, lots of competition and quality consumer choice,” Schaeffler said. “Three or four providers will rise to the top in the steaming world. They will keep taking share away from pay and broadcast TV. The pay TV and broadcast industries are slowly imploding because customers are consistently leaving their services. Both the pay TV and broadcast industries are pressured by internet broadband streaming services. This tectonic shifting of the video television plates will take years and years to shake out.”

The winners will provide broadband distribution services and content, Schaeffler said. Verizon’s purchases of Yahoo and AOL so far are not paying off as investments, and AOL was not “fresh, new or interesting,” he continued.

“AT&T needs to put a ton of money into new content,” Schaeffler said. “Netflix in 2018 is said to have spent $7 billion to $8 billion. AT&T just purchased Time Warner to put their content on all of their platforms. I don’t know if that is going to be enough, because AT&T also will need to invest in lots of new content, pressured by Netflix, of course.”

“AT&T’s challenge is to avoid outrunning its ability to manage three very different types of businesses: entertainment production, subscription-based linear video distribution and a huge heterogeneous telecoms network,” said Stephen Blum, president of Marina, California-based Tellus Venture Associates, a broadband consulting firm. “Two of those businesses — subscription video and telecoms — are changing rapidly, and AT&T needs both vision and capital to stay in the game. So far, it appears to be short on both. There’s a limit to what you can do with a satellite video network.”

DirecTV will never be interactive, so it can’t leverage its distribution investment to create on demand, over-the-top (OTT) services to deliver video through the internet in the same way as cable companies, Blum said. AT&T’s telecom business is also showing the strain, since it is holding back on 5G and fiber upgrades and increasingly relying on its existing 4G infrastructure and technology, he added.

“AT&T is replacing copper networks in rural and other less lucrative communities with 4G-based fixed wireless service and, in part, relying on federal public safety and universal service fund subsidies to do it, and it’s investing in marginal 4G upgrades rather than 5G technology, but calling it 5Ge,” Blum said. “Outside of the limited areas where it’s investing in fiber upgrades, AT&T’s networks are taking a back seat to more specialized players in its footprint: cable companies can deliver faster broadband service more widely and have a plausible chance of creating walled gardens that can hold off OTT challenges. OTT companies are sucking up consumer viewing hours and pure play, or near pure play, mobile companies are moving to 5G.

“I have serious doubts that AT&T has either the management talent or the capital to meet all these threats head on. Success might end up defined as simple survival.”

Also bland on the immediate prospects of AT&T is Goldman Sachs analyst Brett Feldman, who placed a neutral rating and a modest price target of $31 a share on the company. However, an optimistic outlook for AT&T comes from Nomura/Instinet analyst Jeffrey Kvaal, who gave AT&T a buy rating and a price target of $43.

The outlook for AT&T as an investment, aside from its dividend yield, is open to debate. Ultimately, AT&T will need to show its competitive muscle to succeed in its varied businesses. For now, AT&T seems to be a risky investment that could deter all but the most dividend-loving investors.