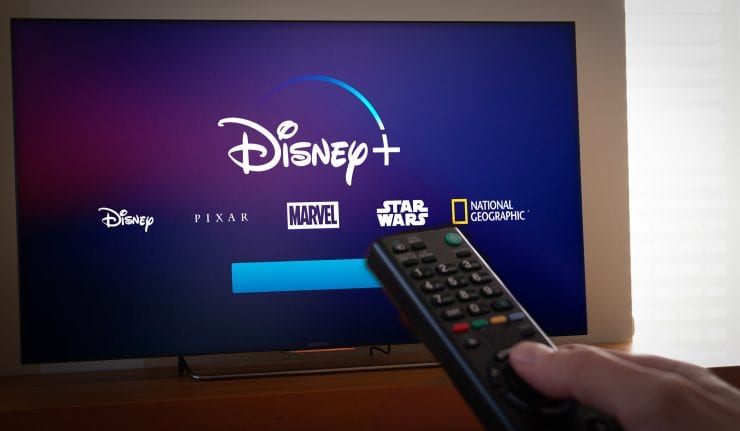 Disney’s video streaming service that its Chairman and CEO Bob Iger said would roll out later this year may lift the company’s stock price when it starts providing the company’s best content directly to its customers.

The Walt Disney Company (NYSE:DIS) paid $71 billion to acquire 21st Century Fox to strengthen its movie content for its planned Disney+ direct-to-consumer (DTC) video streaming offerings. Disney is joining AT&T (NYSE:T), which spent $85 billion to acquire Time Warner, and other major companies in trying to offer its content directly to consumers the way that  Netflix, Inc. (NASDAQ:NFLX) and other video streaming providers do.

Disney has amassed a treasure trove of video content since its launch in October 1923 by its namesake Walt Disney. Iger said during the company’s Feb. 5 earnings call with analysts that its “number one priority” is its direct-to-consumer video streaming media business.

Disney’s video streaming direct-to-consumer & international revenues for the first quarter of fiscal 2019, ended December 29, 2018, dipped 1 percent to $918 million, with the segment’s operating loss jumping to $136 million from $42 million. Revenues reflected a 4% decrease from an unfavorable foreign currency impact. The increase in operating loss was due to the investment ramp-up in ESPN+, which was launched in April 2018; a loss from streaming technology services; and costs associated with the upcoming launch of Disney+, partially offset by increases from its  International Channels business and a lower equity loss from its investment in Hulu.

Iger boasted during the Feb. 5 earnings call that the Disney studio received 17 Oscar nominations, with seven going to its Marvel unit’s Black Panther movie, including a nomination for Best Picture. In fact, Disney and 21st Century Fox combined to collect  37 Oscar nominations, showing the creative potential of both of the parent company’s moving-making entities.

Indeed, Disney’s previous corporate reorganization was designed to support its direct-to-consumer efforts and to provide enhanced transparency into its investment and progress in DTC, Iger said. Disney is focused on offering the programming and the technology required for the success of its video streaming media business, he added.

Despite the need to enact major job cuts at its ESPN unit, Iger said he is “thrilled” with the continued growth of ESPN+, which is a video streaming subscription service available in the United States through sports broadcaster ESPN Inc. and its parent company Walt Disney.

For example, the very first UFC Fight Night under the company’s new five-year rights deal led nearly 600,000 fans to sign up for the ESPN+ service. The fact that 49 million Americans, 15 percent of the entire U.S. population watched ESPN content on real-time television that day and millions more engaged on other platforms, including ESPN+, “speaks to the enduring power of live sports,” the strength of the ESPN brand and the value of the UFC rights the company acquired, Iger said.

“We expect the expansion of combat sports content on the streaming service to drive continued growth in the months ahead,” Iger said during the Feb. 5 earnings call. “ESPN+ now has 2 million paid subscriptions, double the number from just five months ago.”

ESPN+ operates on BAMTech’s platform, which has proven stable during peak live streaming demand and “easily handled more than 0.5 million people” signing up in a single 24-hour period, Iger said.

“This same technology will power Disney+ when it launches later this year,” Iger said. “We have a number of great creative engines across our company, all of which are dedicating their talent, focus and resources to develop and produce strong content for the Disney+ platform.”

Disney’s Video Streaming Will Tap Talent of Its Innovators

Most of the teams creating shows and movies for the new Disney+ service are the same innovators and storytellers driving the “prolific success” of Disney, Pixar, Marvel and Lucasfilm,” Iger said during the company’s earnings call. He added the company looks forward to leveraging National Geographic to provide even more unique content for Disney+.

Bob Carlson, who leads the Retirement Watch investment advisory service, said Disney Investors will need to be “very patient” with the company.

“Whether their patience will be rewarded will depend on how well Disney executes its plans,” Iger said. “The company is investing a lot of resources into a new Disney+ streaming service, and it also is integrating the large, expensive acquisition of the majority of 21st Century Fox’s film and entertainment assets. The good news in the short term is that ESPN’s streaming service has signed up a lot of subscribers. But it could be a couple of years before we know how successful these efforts will be.”

In the meantime, there are two potential risks to the stock, Carlson continued.

“If there’s a recession, revenue from Disney’s very profitable parks likely would take a big hit,” Carlson said. The other risk is its string of movie successes could end at any time. While it has put together a great package of franchises, it could run out of new ideas or the viewing public might decide it wants something different at any time.”

Disney’s Video Streaming Initiatives Show It Is Not a Dull, Mature Company

“A lot of people look at Disney as a dull, mature enterprise that only functions as a spoiler on the ambitions of Netflix,” said Hilary Kramer, a seasoned Wall Street professional who leads the Value Authority, Turbo Trader and Inner Circle advisory services for individual investors. “If only that mean old Mouse would let Netflix keep running its blockbuster movies and massive content catalog forever, people say, Netflix wouldn’t need to spend itself into debt in order to make its own movies.

“That’s just not accurate because it confuses a relatively small piece of the DIS empire with the whole of what NFLX wants to become. NFLX wants to be a broadcast channel liberated from the cable box. It wants to be a premium version of ABC or an adult Disney Channel. Great. There’s room on Wall Street for multiple streaming channels. But as DIS moves in on its own streaming service, it’s going to ramp up the audience fast to NFLX style scale.”

Kramer said there is room for multiple video streaming channels per household.

“I suspect we’ll end up with 6-10 as soon as the cable bundle unwinds,” Kramer said. “NFLX can be one. DIS can be another.”

Given a world big enough for two or more streaming channels with roughly the same reach and trading at roughly the same market cap, should an investor buy the one that’s just a channel like is CBS Inc. (NYSE:CBS) is today or NFLX tomorrow? Or should an investor buy shares in Disney that also offers theme parks, blockbuster movies, brand name content and iconic cartoon characters such as Mickey Mouse and Donald Duck?

“DIS can be NFLX as well as a lot more,” Kramer said. “Revenue is tracking close to quadruple NFLX and profit leaves the streaming-only company in the dust. Is DIS growing as fast? No. It’s already bigger in some ways than NFLX will ever be. And if there can only be one, which company ends up buying or burying the other? Don’t count DIS out.”

However, Disney is not gaining the love of investors for its video streaming potential, based on a 3.14 percent drop in its share price since it reported financial results after the market’s close on Feb. 5. Disney’s share price slid from $112.74 to $109.20 at the close of trading on Feb. 12. 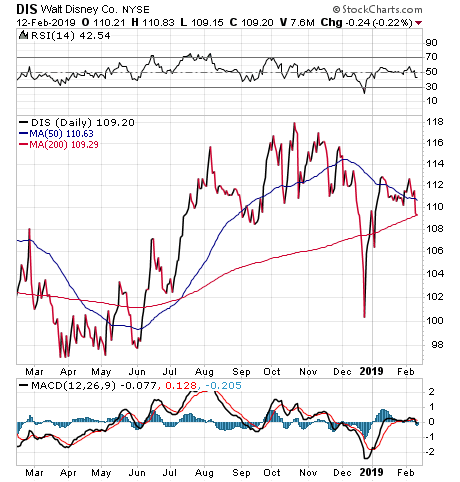 “We look forward to the transformative year ahead, including the successful completion of our 21st Century Fox acquisition and the launch of our Disney+ streaming service,” said Iger, who added the company will continue to invest in exceptional content and innovative technology to drive growth.

Disney’s flat $15.3 billion in revenue in fiscal 2018 and fiscal 2017 failed to dampen Iger’s outlook as he championed the company’s Disney+ initiative during its Feb. 5 call with analysts. Even though Disney beat analysts’ estimates on revenue and profits, the laggard was the touted DTC/International business.

According to FactSet, sell-side sentiment on Disney leans positive with 67 percent of firms rating the company as a buy, 29 percent calling it a hold and 1 investment firm giving a sell-equivalent rating. Revised estimates after the earnings report call for a weaker-than-previously expected March quarter. Wall Street’s consensus target price for Disney of $125.90 reflect a potential 13.26 percent upside from current levels.

Disney is among the media companies that have taken on big debt loads to make strategic acquisitions. However. Disney issued  investment-grade bonds, which mean lower yields for investors and lower costs for the company.

Netflix, AT&T, Disney and other video streaming companies are spending heavily to gather the best possible content to gain a competitive advantage to entice subscribers. Disney may have the ultimate edge with its rich content collection and continuing steam of new offerings.

Investors may not see an immediate need to buy shares of Disney but those who want to avoid getting left on the side of the tracks could acquire shares and collect a 1.58 percent dividend yield while staying patient for the Disney+ service launch and future growth. At least for now, the stock is one for investors seeking growth to watch and a potential buy for income investors who will be paid to wait for future capital appreciation.

A ‘Frozen’ Treat for Disney Earnings