THE TRUTH ABOUT GLOBAL WARMING: REAL THREAT OR HYSTERIA? 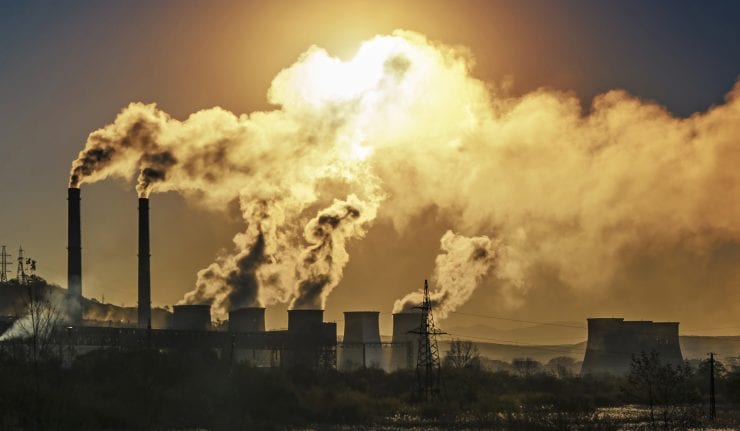 I received an urgent letter last month from Janet Yellen, the former Fed chair, asking me to join with other top economists, including 27 Nobel Prize winners, to sign a statement calling for a carbon tax to be imposed on American business and consumers to both counter a “well-known market failure” and to create a “low-carbon future.”

I was surprised to see the letter had been signed by several market-friendly economists such as Glenn Hubbard, Greg Mankiw and Alan Greenspan. Did those three also drink the purple Kool-Aid?

First of all, air pollution is not really an example of market failure. Instead, it is a sign of the government’s failure to enforce property rights.

Second, air pollution is not a serious problem any longer in the United States and other industrial nations thanks to catalytic converters and other anti-pollution devices.

If you look at various charts of pollution in the United States, it has undergone a sharp decline over the past 50 years, as reflected by this chart that I show all my students. Before I show the chart to the class, I ask them, “How many of you think that air pollution has gotten worse in Southern California?” Usually, about a third of the hands go up. Then I show them this chart: 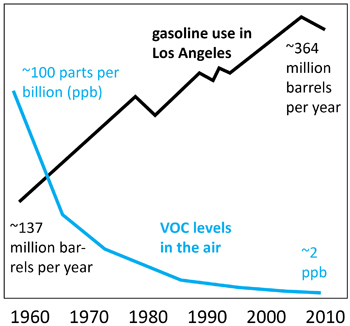 In California’s Los Angeles Basin, the average level of vehicle-related air pollutants has decreased by about 98 percent since the 1960s, even as area residents now burn three times as much gasoline and diesel fuel. Between 2002 and 2010 alone, the concentration of air pollutants called volatile organic compounds (VOCs) dropped by half, according to a new study by NOAA scientists and their colleagues. The report called “Multi-Year Trends in Volatile Organic Compounds in Los Angeles, California: Five Decades of Decreasing Emissions” was published in the Journal of Geophysical Research.

“The reason is simple: cars are getting cleaner,” said Carsten Warneke, a NOAA-funded scientist with the Cooperative Institute for Research in Environmental Sciences (CIRES) at the University of Colorado, Boulder.

The magnitude of the drop in VOC levels was surprising, even to researchers who expected some kind of decrease resulting from California’s longtime efforts to control vehicle pollution.

What about other countries? If you look at the pollution trends in the United States, the United Kingdom and Europe, they all show a dramatic fall in pollutants. Indeed, we see that there has been a 90 percent drop since 1970 according to https://ourworldindata.org/air-pollution.

From what I can tell, pollution is no longer a problem in the West. However, pollution remains a problem in China and other emerging markets. That’s where the economists need to focus their attention.

What About the Fear of Global Warming, More Violent Climate Change and Rising Tides?

Regarding this fear, I now quote from a recent column by Richard Rahn, the director of the Institute for Global Economic Growth:

“This past week, a number of Democratic politicians told us we have only 12 years to get rid of airplanes, farting cows and other hazards [referring to the “Green New Deal”]. Al Gore, of course, endorsed the policy proposals. You might recall that several decades ago, Mr. Gore told us that sea levels would be rising at an increasingly rapid rate, putting most low-lying islands and much of the state of Florida under water, and that the Arctic icecap would be gone by 2009.

“Note: I am writing this commentary at a few feet above high tide on the shore of Biscayne Bay in Miami, overlooking a yacht club that was built over a century ago. It is still used every day without members getting their feet wet, and the boats continue to float in their slips without washing up on the lawn.

“As a factual matter, the seas have been slowly rising each year from the end of the last ice age, and the rate of rise has not increased. As it has always been, most people don’t even notice but do build structures a bit higher when replacing them. And the Arctic ice cap is still there — and so prudent persons probably would not try to sail across unless they were in an ice breaker or nuclear submarine.”

Rahn then raises a much more alarming “man-made” phenomenon — the rising deficit spending (approaching $1 trillion a year) and a national debt crisis (approaching $22 trillion) that is developing, slowly but surely, in the United States.

Even Keynesian economists such as Robert Shiller, Larry Summers and Janet Yellen, know that sound economic policy requires a balanced budget and running a surplus during times of full-employment and peaceful prosperity.

CFA Society Book Club, Thursday, Feb. 28, Biltmore Court, Los Angeles: I’ll speak about my book, “The Making of Modern Economics: The Lives and Ideas of the Great Economic Thinkers” (Routledge, 3rd ed.). Find out why John Mackey (CEO, Whole Foods Market) has read it three times! The title of my talk is: “Who’s Winning the Battle of Ideas: Keynes, Marx or Adam Smith?” The event includes dinner, 5:30-7:30 p.m. The price is only $15 for my subscribers to attend. To reserve a spot, email info@cfala.org. You also can register at https://www.cfala.org.

You Blew It!
Who is Worse, Sarah Palin or Alexandria Ocasio-Cortez?

When Sarah Palin was first introduced to the American public in 2008 as Sen. John McCain’s choice as vice president, it seemed like a smart move to bring a talented young woman and the Governor of Alaska into the presidential campaign.

After she opened her mouth, we soon painfully discovered that she was not ready for prime time. She couldn’t name one newspaper that she read every day. She could barely name a single decision of the Supreme Court with which she disagreed. She said that Africa was a country. It was one gaff after another.

Now, history is repeating itself with the attractive, enthusiastic, outspoken Bronx bombshell Alexandria Ocasio-Cortez, AOC for short. She has quickly gone from a bartender to congresswoman who is all the rage these days.

And then she opened her mouth.

What’s more embarrassing is that she has a degree in economics from Boston University and is an unapologetic advocate of socialism. I call her Castro-lite.

I knew that the University of Massachusetts-Amherst was a bastion of Marxism, but Boston University?

It looks like the Republicans and the Democrats have egg on their faces when it comes to who is representing them in the media. 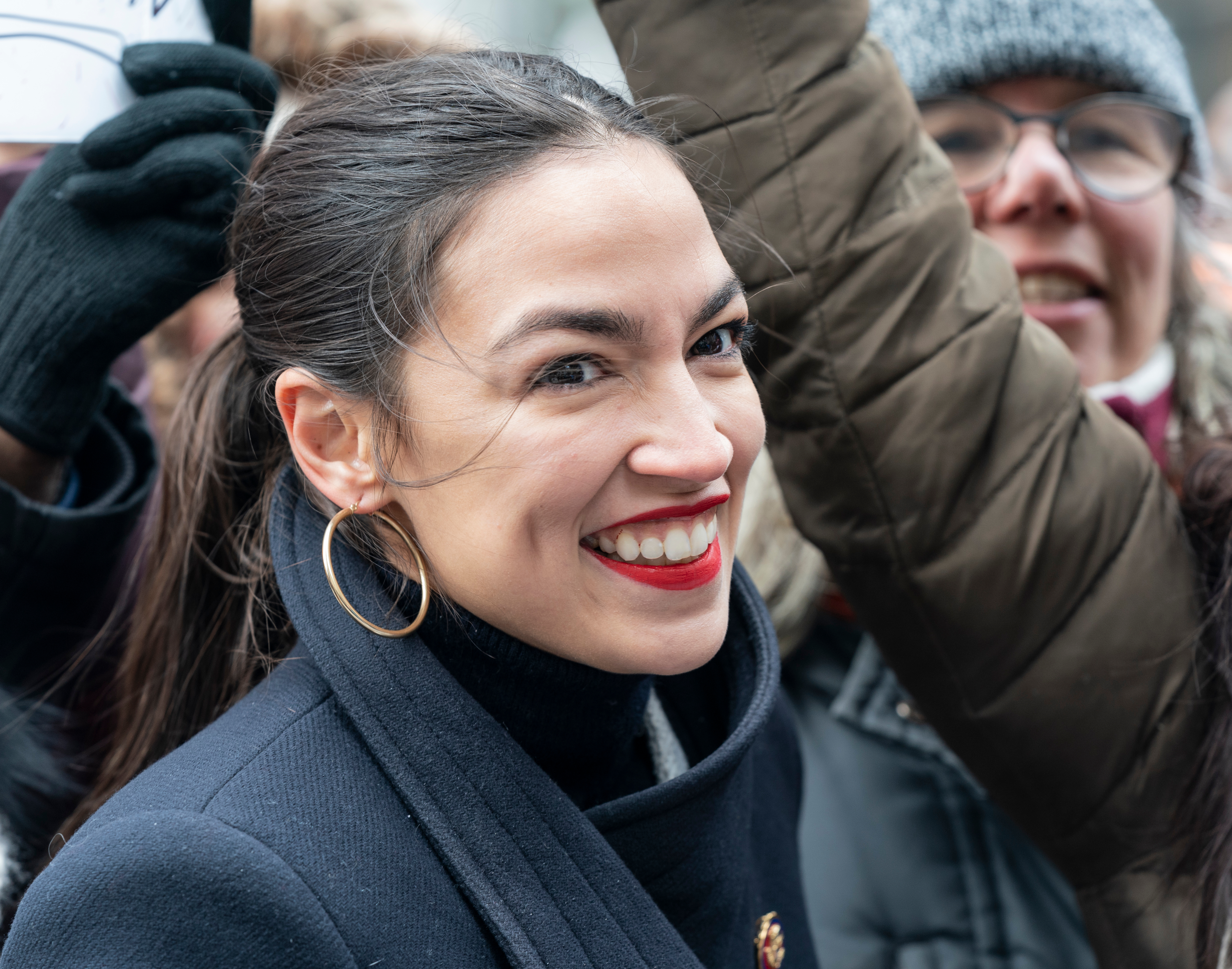 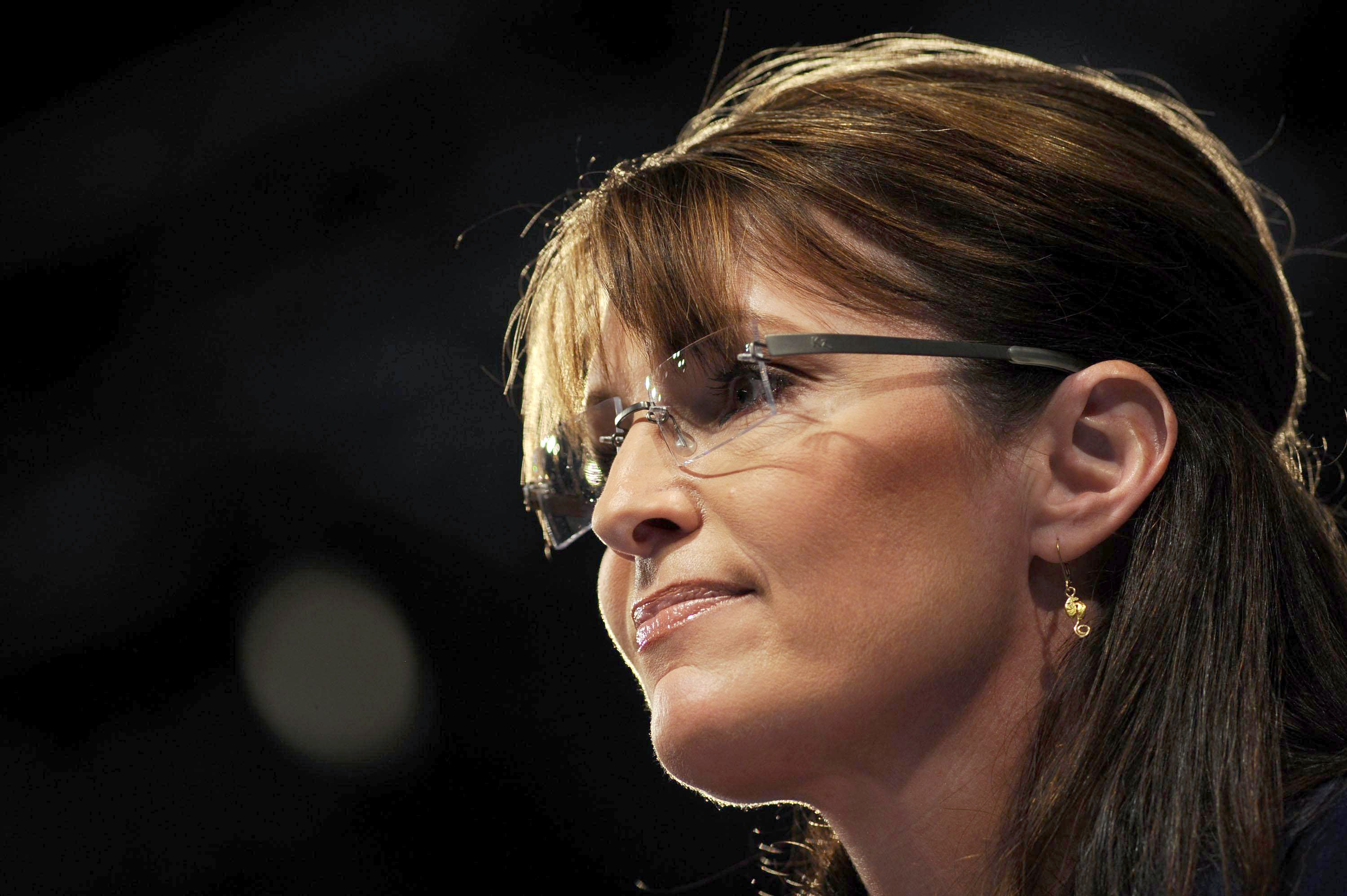