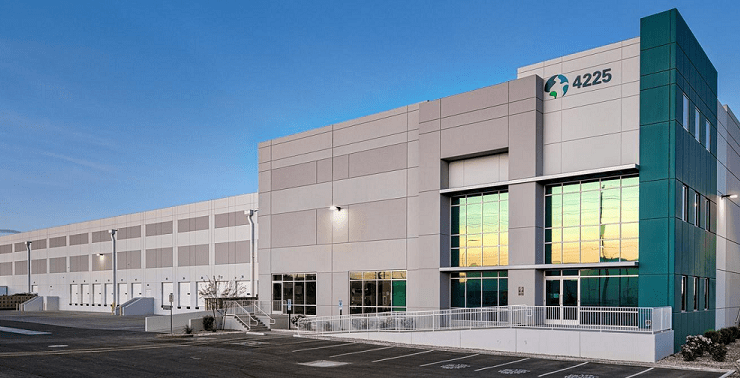 In addition to the share price recovery, Prologis is increasing its quarterly dividend payout amount for the sixth consecutive year and rewards its shareholders with a dividend income that yields nearly 3%.

While the company’s share price dipped significantly in December 2018, it recovered quickly and returned to its steadily rising trend over the past decade. The share price lost more than 83% of its value between May 2008 and March 2009. However, as the markets reversed trend and started rising, so did Prologis’ share price. Since bottoming out in early 2009, the share price has advanced more than seven-fold with minimal volatility and only a few double-digit percentage corrections like the 18% drop in December 2018.

The share price’s most recent steep recovery might seem to be driven by the above-expectation fourth-quarter and year-end financial results. While the positive financials report certainly helped at the tail end, the share price recovered more than 70% of its December losses before the release of the company’s financial results on January 22, 2019.

Just outside the trailing 12-month period, the share price went through a small correction. The share price dip was large enough to drop the 50-day moving average (MA) below the 200-day MA — technical analysis deems this occurrence as a strong indicator of potential share price decline.

However, Prologis managed to shake off this as just a cyclical price level adjustment. The share price resumed its uptrend and the 50-day MA was back above the 200-day MA by mid-May 2018. After rising nine months into the trailing 12-month period, the share price had gained more than 10% and reached a new 52-week high on December 3, 2018. However, immediately after reaching that new peak, general decline of the overall market, as well as uncertainty regarding the actions of the Federal Reserve regarding interest rates, caused investor concerns and the share price lost 18.5% of its value in merely three weeks.

The 52-week low of $55.94 occurred on December 24, 2018. However, after the year’s low, the share price hesitated slightly before embarking on a steep uptrend. After ticking up a few points in the week after the 52-week low, the share price dipped again over the first two trading sessions in 2019. However, after that minor hesitation, the share price took off, regained all its December losses almost as quickly as it lost them and reached a new 52-week high by January 31, 2019. The share price extended its rapid advancement and gained a few additional percentage points before reaching its most recent 52-week high of $71.62 on February 22, 2019.

Unlike many other equities that are still struggling to get out of red since the overall market low on Christmas Eve, Prologis increased its dividend payout and delivered capital gains to its shareholders. Investors holding a long position in the Prologis stock enjoyed a combined total return from the rising dividend income distributions and asset appreciation to the tune of 15.5% over the last 12 months. Additionally, Prologis rewarded its longer-term shareholders with an 81% total return over the past three years and a 91% total return over the last five years.