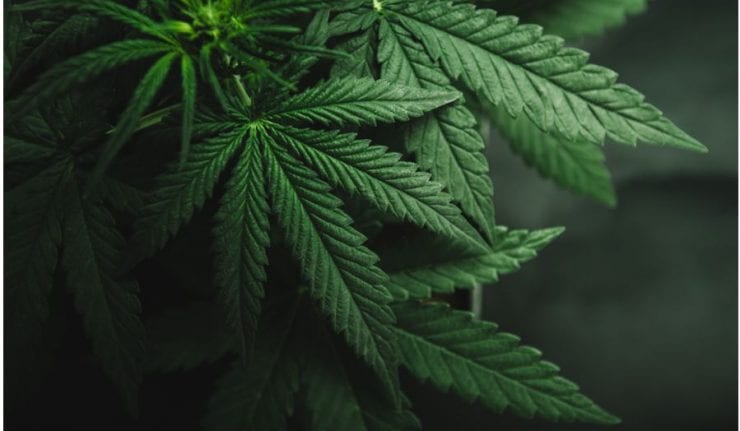 Cannabis stock investing is demystified with technical analysis that helps to prevent hype and potentially exaggerated market projections from luring people into buying shares of companies that may fail.

Whether the rush to pursue cannabis stock investing will lead to the next market bubble is a legitimate question, but the use of technical trading techniques seeks to set aside emotion and to focus on market reality. Such technical analysis involves reading stock charts and looking for patterns that could indicate the next direction of a particular investment.

“Humans are always on the hunt for the magic pill, the combination of just the right fad diet and split-second exercise routine that will make us live longer and healthier than ever before — something to cure all our woes, with the least amount of effort,” said Toni Hansen, president and head trader at Trading from Main Street, which has provided market analytics and trading education since 1997. 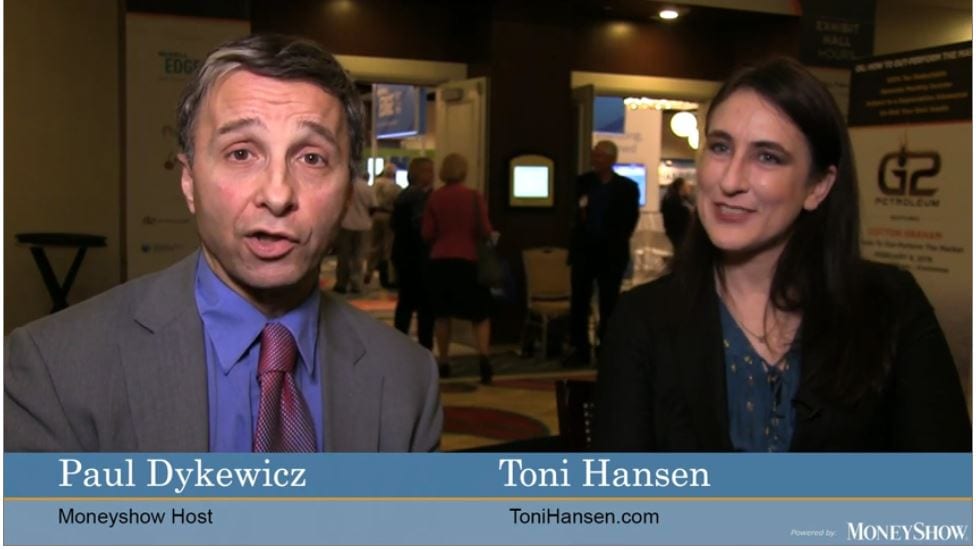 Hansen, who I interviewed at the MoneyShow in Orlando on Feb. 10, used a chart to illustrate the literal ups and downs in the share price of Weight Watchers International, Inc. (NASDAQ:WTW), showing patterns that she is observing in cannabis stock investing. 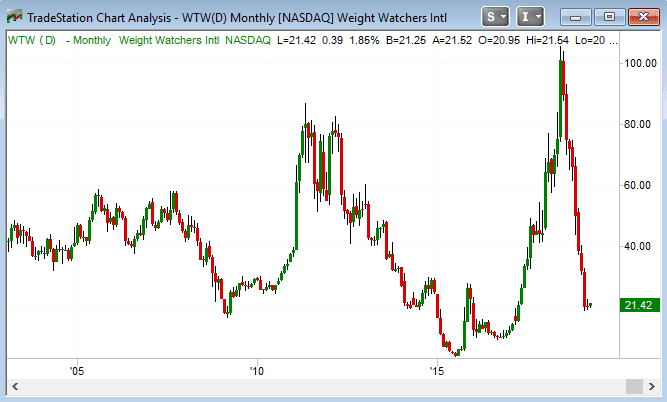 In many ways, the “current craze” in cannabidiol (CBD) and marijuana stocks is not unlike the bull runs of Weight Watchers in 2011 and once again from 2017-2018, Hansen said. The weekly chart of Aurora Cannabis Inc. (NYSE:ACB; TSE:ACB) looks remarkably similar to Weight Watchers at its highs in 2011-2012, she added. 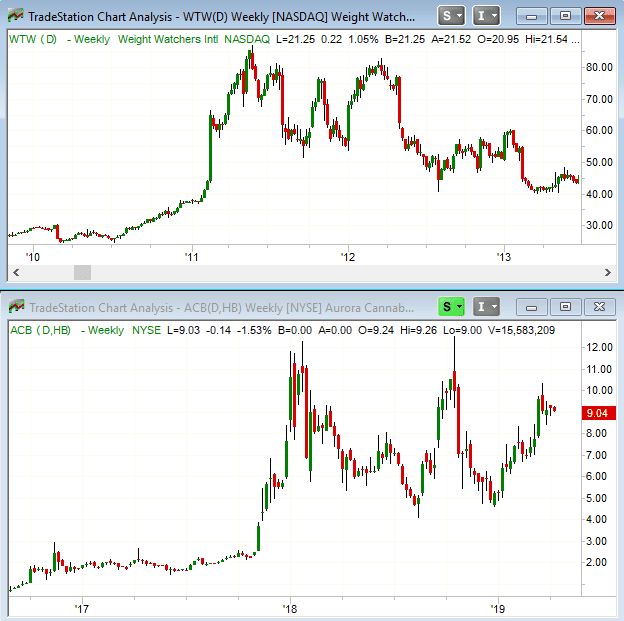 Many analysts have been paying close attention to Aurora Cannabis as the rise in its share price has been followed by pullbacks and rebounds.

“Let’s look at the facts,” Hansen said. “Obesity is epidemic in America. Weight Watchers appeals to the masses looking to get rich on this fact. Numerous drug companies have jumped onto this bandwagon over the years. Most have failed. Do you remember Orexigen Therapeutics (formerly OREX)? Neither do most investors.”

Orexigen Therapeutics is a pharmaceutical company that focused on developing treatments for obesity but ended up filing for Chapter 11 bankruptcy court protection on March 12 last year. Orexigen entered into an asset purchase deal with Nalpropion Pharmaceuticals, a special purpose entity that included Pernix Therapeutics, to sell most of its assets, subject to court approval. Pernix bought the global rights to Orexigen’s weight loss drug Contrave for $73.5 million.

As for cannabis, the chronic pain CBD is supposed to be able to ease also is “epidemic,” said Hansen, who added pain has impacted her life and many people she knows.

“You see, for several years I was 100% bedridden,” Hansen said. “There was nothing that would stop the pain. Nothing. Most drugs that offered relief came with equally disabling side effects. And so the topic of CBD arose.

“At first the conversations were whispered. Those who broached the topic in online forums would quickly find their post deleted by overly cautious moderators. Nevertheless, they persisted. And they became mainstream. More and more people in the chronic pain community were willing to try anything, no matter what the risks, as long as it offered even the hope for relief.”

“In the five years since my chronic pain journey began, while the government cracked down on opioids and more and more doctors became hesitant to prescribe anything with a remote potential to lead to addiction, patients have taken it upon themselves to seek out other sources of relief,” Hansen said.

The Trump administration “opened the doors” to legalizing hemp-derived CBD in all states and make it fairly easy for anyone to give it a try, Hansen said.

“Now the market is flooded with start-ups,” Hansen said. “Will Aurora Cannabis be one that comes out on top? Or will it be Charlotte’s Web Holdings (CSE:CWEB, OTCQX:CWBHF). Charlotte’s Web is the largest hemp-derived manufacturer by market share that is profitable on an operating basis. It’s also at all-time highs.” 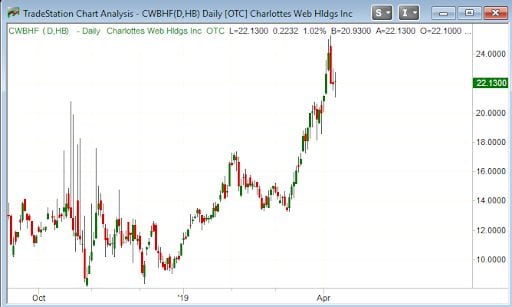 Tilray Inc. (NASDAQ:TLRY) was in a similar position to Charlotte’s Web last fall. Both companies had similar technical beginnings, but just as occurred with Tilray in late September, Charlotte’s Web rallied strongly recently and now it has become risky to invest in it at current levels, Hansen said.

“It’s in day traders’ territory for now, just as Tilray had been late last year,” Hansen said. “Tilray has fallen out of favor since it peaked and, when I reviewed it last fall, I also used the Weight Watchers comparison. Many of these companies will spike hard, but then fizzle out. At some point down the road, you will likely see some short-lived resurrection attempts in those that have fallen that will dwarf their original glory, but most will fade from our memories, like Orexigen.”

Hilary Kramer, a Wall Street professional who leads the Value Authority, GameChangers, Turbo Trader and Inner Circle advisory services for individual investors, said the chart of Tilray does not offer a compelling value proposition and she would not become a buyer until demand for the stock revives enough to overcome a steady pulse of investors exiting their positions. Tilray has fallen 45 percent from its Jan. 14 high and a full 80 percent from its “giddy,” post-initial public offering (IPO) peak, Kramer said.

“We haven’t seen any signal that the knife has stopped falling,” Kramer said. “It can keep falling a long way back to the $17 IPO price.”

General Cannabis Corp. (OTCQX:CANN), a marijuana darling in 2014, is a great example of why investors should exercise caution, Hansen said. She identified a two-wave spike early in the year that is very similar to current price action in Charlotte’s Web and Aurora Cannabis last fall. This is a common “exhaustion move” that will occur over and over again in many of these securities in this field, Hansen said. 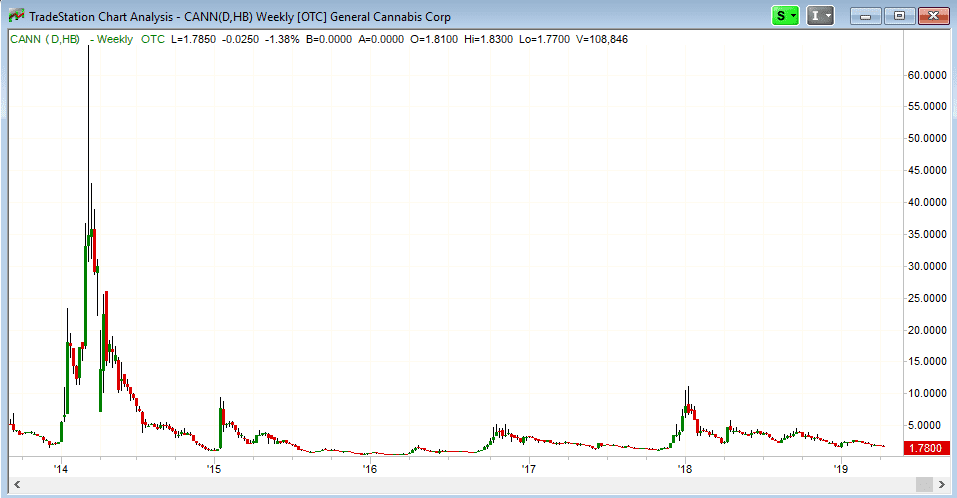 One exchange-traded fund (ETF) that offers a way to invest in CBD and cannabis is ETFMG Alternative Harvest ETF (NYSE:MJ). The fund offers a pure play on cannabis and it recently was recommended by Jim Woods, who leads the Successful Investing, Intelligence Report and Bullseye Trader advisory services. However, he cautioned that the sector tends to be “very volatile,” as the following chart shows. 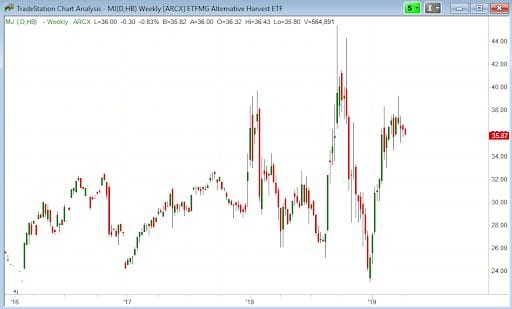 MJ is currently trading in a widening wedge formation, Hansen said. It has not only higher highs, but lower lows, she added.

“This is a sign of strong indecision among market participants, Hansen said. “Rallies within such a formation often give way to rapid corrections and MJ shows no strong breakout bias at present. I’d rather keep an eye on the main players who sustain average daily trading volumes over 500,000 shares/day, watching for long-term congestions and gradual pullbacks to 61.8 percent and 76.4 percent Fibonacci fan zones for continuation strategies. The fans will help add a time element to a correction that can bring in stronger buying than a typical pullback alone. At present, none of them are catching my eye.”

Hansen said she doubted the “current obsession” with CBD and marijuana has peaked, but many of these companies have.

“We are still on the upside of the fad, but I do believe that fad is a word that accurately describes our current obsession,” Hansen said. “As CBD has become more available to chronic pain sufferers, many have learned a simple truth: for them, it does not help at all and the prices of CBD oils are beyond what many who are disabled can afford out of pocket. An ounce of CBD oil can cost nearly $200. The CBD-laced candy bar at the smoothie shop I stopped by last week cost $15. I passed despite the massive migraine I was sporting.”

A placebo effect could be at play for those who swear by CBD, but it is a “novelty treatment” that is already starting to lose favor with certain users, Hansen said.

“While it has shown promise for those suffering from childhood epilepsy, clinical research is still sorely lacking and is mostly anecdotal,” Hansen said. “Long-term investors be wary. Short-term day traders continue to have fun. The stocks trade very well technically, on both the up and downside. Just remember these highs typically crash.”

For investors seeking to turn a big profit by engaging in cannabis stock investing, the risks have rocketed as the share prices have soared. Conservative investors may want to leave the sector for risk takers who can afford to take a chance on companies that might become profitable survivors, but many more start-ups likely will resemble the anti-obesity stocks whose share prices shrunk and left their shareholders disappointed. 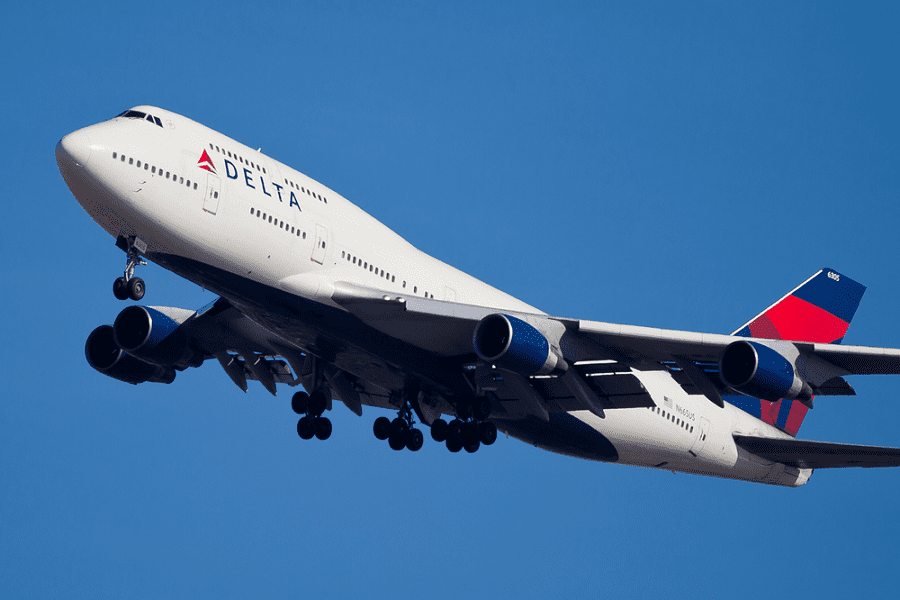 Delta Air Lines, Inc. (NYSE:DAL) recovered most of its share price losses since its all-time high in November 2018 and looks to continue its uptrend on positive financial results for the first quarter 2019.

The company’s share price experienced some volatility over the past five years. However, except for a 30%-plus drop in 2016, the share price rode an overall uptrend until the last quarter of 2018. After another significant pullback -- 25% in two months -- the share price bounced