Iridium’s stock price offers a unique opportunity to invest in a mobile satellite operator whose seasoned management team has positioned the company to provide capital appreciation and to produce significantly increased cash flows after the launch of its new constellation of 66 spacecraft into low-Earth orbit (LEO).

While certain sectors of the satellite industry are served by formidable competitors, Iridium Communications Inc. (NASDAQ:IRDM) fills niches by meeting encrypted communication needs of the U.S. Department of Defense (DoD), delivering broadband services, tracking the internet of things (IoT) and hosting the payloads of other organizations on its in-orbit satellites. Iridium’s emergence as a key defense contractor exemplifies how the private sector has commercialized space almost 50 years after American astronaut Neil Armstrong became the first man to walk on the moon and famously said, “That’s one small step for man, one giant leap for mankind.”

“We’re optimistic we will remain a growth company,” Matthew Desch, Iridium’s CEO, told me in an exclusive interview on May 8, just hours after he was named “Satellite Executive of the Year” by a vote of attendees at the Satellite 2019 conference in Washington, D.C. “We have a long history in our niche and know what our competition looks like for the next 10 years.” 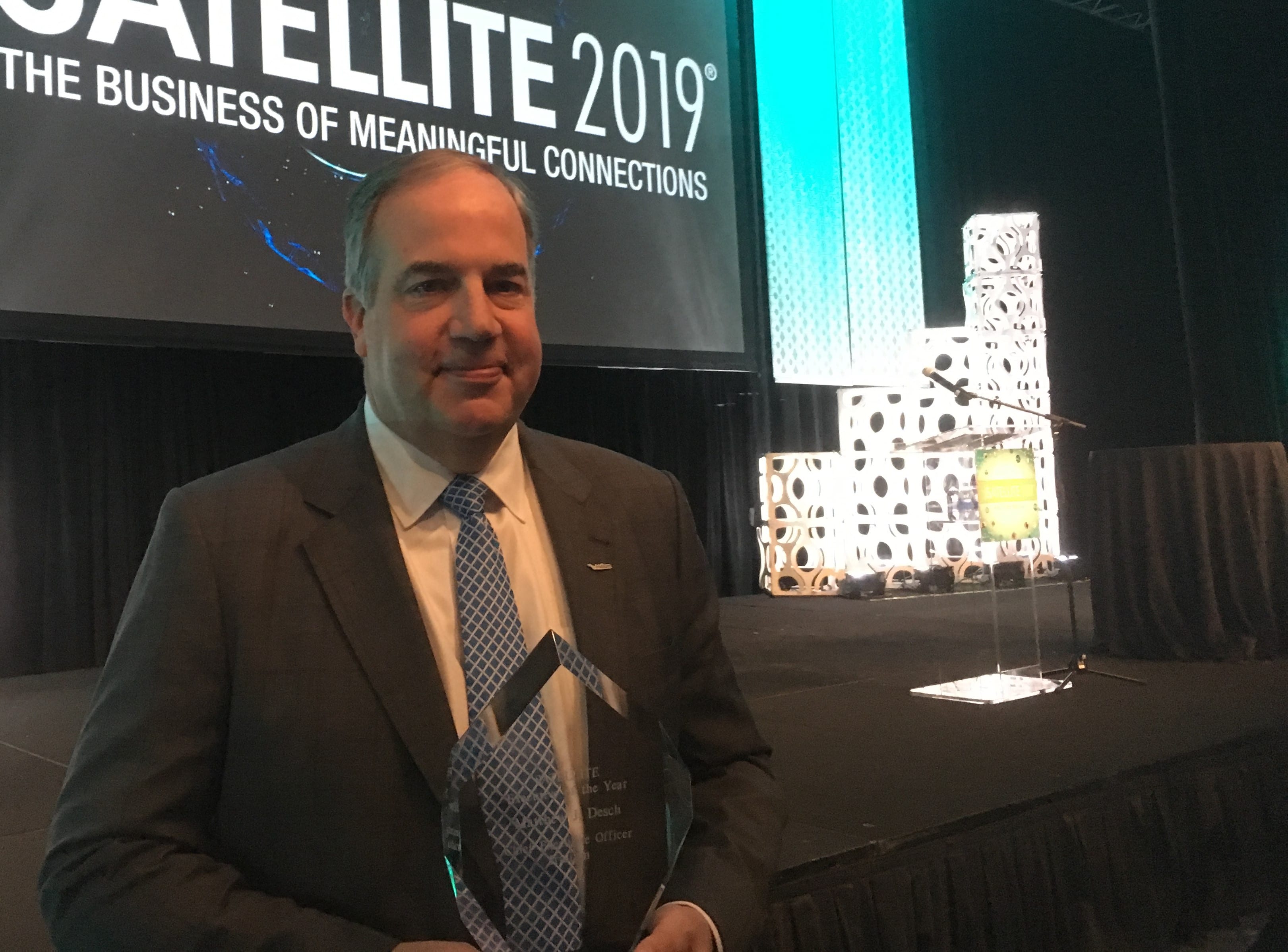 Freedom from Taxes Through 2023 and Capital Expenditures Until 2030

McLean, Virginia-based Iridium’s past financial losses are expected to give it a break from paying any taxes through 2023, Desch told me. The company’s projected surge in cash flow may be substantial enough to support the future payment of dividends, the repurchase of shares or even a strategic acquisition, Desch added.

SpaceX’s latest launch on Feb. 2 to fully deploy the $3 billion Iridium NEXT satellites should allow the space-based communications services operator to enjoy freedom from capital outlays for about the next 10 years through 2030, Desch said. Additional revenue streams of the new-generation satellites will include $1 billion from hosting the payloads of others on its spacecraft, along with the introduction of its Iridium Certus L-Band service to pursue a $700 million broadband market opportunity and to offer a midband service for telephony and IoT, he added.

Iridium NEXT replaced the company’s original constellation with 75 satellites lifted into low-Earth-orbit 483 miles above the ground by SpaceX’s reusable Falcon 9 rockets on eight different flights. Nine of those satellites are spares that orbit a bit lower than the operational spacecraft in Iridium’s 66-satellite system.

SpaceX, created in 2002 by entrepreneur Elon Musk, helped halve the launch costs by allowing Iridium to forgo use of traditional expendable rockets that cannot be reused like the Falcon 9. Six spare Iridium NEXT satellites remain on the ground, in case they are needed to be launched in the future to replace any of the in-orbit spacecraft.

Iridium has served the DoD for the past 20 years since 1990 by providing critical communications. A recently expired five-year DoD contract will give Iridium increased revenues when the next multi-year pact is finalized soon.

The just-expired DoD contract with Iridium averaged $88 million a year and the new one is expected to boost the annual revenue received by the company. A temporary extension of the existing contract is in place to continue the arrangement until a new deal is finalized, Desch told me.

The gateway, operated by the DoD, provides satellite uplink and downlink communications capabilities for the U.S. military through the Iridium network. The number of subscribers operating under DISA’s Iridium EMSS program have more than doubled during the five-year period between 2013 and 2018 to 113,000 for a 17.25 percent compounded annual growth rate.

The surge in growth has occurred under a current flat-rate contract that provides unlimited secured and unsecured voice, broadcast and data services to U.S. warfighters and other government users, Iridium officials said. One of the services offered by Iridium is the Distributed Tactical Communications System (DTCS), a push-to-talk voice and data service that is used by U.S. troops on the move when they are not within the direct line of sight of an in-orbit satellite.

Iridium Certus is expected to provide the fastest L-band broadband service in the world at speeds up to 1.4 mbps, which will let the company’s customers use smaller and more cost-effective terminals, Desch said.

In addition, a new aviation communications service offered by Iridium NEXT will assist with tracking aircraft. For example, Malaysia Airlines Flight 370, which went missing in 2014 when it veered off course never to be seen or heard from again, could become the last such occurrence due to a new service called Aireon that is supported by Iridium NEXT.

After departing from Kuala Lumpur for Beijing and reaching a cruising altitude of 35,000 feet, or 10,700 meters, the Boeing 777 disappeared with 227 passengers and 12 crew members on board. A search that stretched from the Indian Ocean west of Australia to Central Asia failed to find the lost aircraft. Aireon would be able to help track planes worldwide with Iridium’s global satellite constellation.

Iridium currently has more than 60,000 subscribers for its aviation services by focusing on cockpit communications, not the hotly competitive spectrum used by passengers, Desch said. Iridium helps pilots communicate with air traffic controllers, he added.

The completion of the Iridium Next constellation frees the company’s future cash flow to “accelerate earnings growth,” Perry told me.

“While the stock has traded to a new all-time high of $28.24 and is now pulling back to the $25 level with the China trade-related sell-off, it is offering investors an attractive entry point,” Perry said.

Long-term Investors Could Be Rewarded by Iridium’s Stock Price

Kramer continued, “Investors should have a few long-term positions that can look a little slow or even speculative today but have extremely high-impact potential for three or even four years. That’s this company. It’s not that the operation is inefficient because it isn’t. According to my math, it can break even below a $55 million monthly run rate, which is a lot better than plenty of start-up technology stocks I could name.”

Kramer said she is “thrilled” to see a push toward more focused satellites that will support the internet of things in 2021 and beyond.

“Billions of devices are going to need spectrum and IRDM is making a conscious choice to open new horizons there,” Kramer said. “For now, demand is steady but below that magic $55 million a month, so the company is burning cash.” 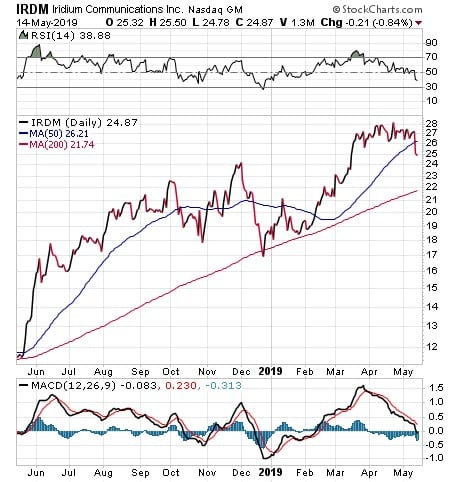 With $275 million in cash holdings right now, Iridium has time to build its business to attain the cash flows it needs for consistent profitability, Kramer added. The company has the potential to “change the world” of communications in the years ahead, she added.

Armand Musey, who heads Summit Ridge Group, a boutique satellite investment consultancy in New York, said the key for Iridium will be to generate sustainable cash flow and growth each year.

“People have made a lot of mistakes in this industry by thinking that the future will be an extrapolation of the past,” Musey told me in a phone interview. “But now technology is changing faster than ever.”

The Trump administration has been leading the rebuilding of America’s military and its space program since his election, Vice President Mike Pence told attendees at the Satellite 2019 conference. President Trump last year backed the largest investment in U.S. national defense since President Reagan’s administration by providing new resources to enhance the resilience of U.S. national defense systems, Pence added.

To carry out that mission, the U.S. Space Force soon will become the sixth branch of the U.S. military to help safeguard America’s ideals and interests, as well as protect freedom, Pence said. America will “always seek peace” in space and on Earth, Pence added.

President Trump intends for America to be as dominant with its security in space as it is on Earth, Pence continued.

America’s rich legacy in space is highlighted by this year’s 50th anniversary of the Apollo 11 moon landing at 4:17 p.m. EDT on July 20, 1969. A little more than six hours later, American astronauts Neil Armstrong and Edwin “Buzz” Aldrin became the first humans to walk on the lunar surface.

Pence recalled hearing and seeing the historic event on television, along with more than 600 million people worldwide, and he shared his wish for new accomplishments in space to inspire today’s young people to reach for the stars in the future. Desch and his colleagues are seeking to introduce new services successfully now with his company’s Iridium NEXT satellites.

Iridium, now restructured after failing financially in the 1990s, offers investors a chance to ride a rocket of potential achievements in the future. However, competition never stands still, and Iridium and its shareholders will need to beware of proposed new low-Earth-orbit rivals that could begin to enter the market in the coming years.