Sony may enhance shareholder value with strategic moves that could include pursuing partnership opportunities with Microsoft Corporation (NASDAQ:MSFT) and potentially suggestions made this month by New-York-based hedge fund Third Point.

Tokyo-based Sony Corporation (NYSE: SNE) is a conglomerate that may be best known for its televisions and other consumer electronics products, but its greatest growth now comes from its Game & Network Services, which has become the company’s biggest segment. Game & Network Services sales rose 19 percent between fiscal year 2019, ended March 31, and the preceding fiscal year, primarily due to a jump in video game software sales and the number of subscribers for PlayStationPlus, a paid membership service.

The importance of Sony’s Game & Network Services unit is shown by the company’s overall 1 percent growth in sales and operating revenue between fiscal year 2019 and 2018 due to a significant decrease in sales of its Mobile Communications segment. Reduced forecasts for the smartphone business within the company’s Mobile Communications segment caused Sony to take an impairment charge. 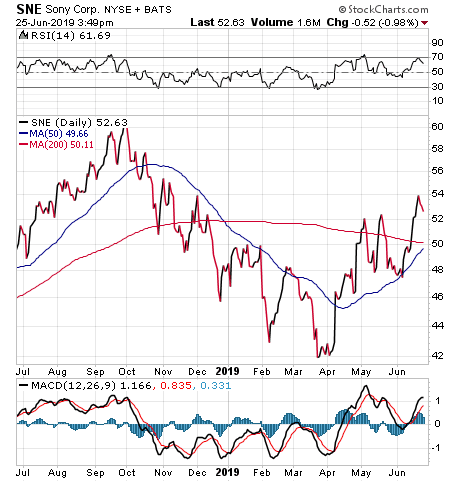 Plus, the MOU covers collaboration in semiconductors, including the development of image sensors fusing Microsoft’s AI technologies. Sony previously announced plans to use AI in its electronics products.

Even though Microsoft is a competitor in video games, more than 80 percent of the games sold by Sony are developed by third-party publishers and many are also sold for the Microsoft Xbox, according to the Goldman Sachs research note.

In addition, current download sales for Sony’s PlayStation and PlayStation Now video game consoles are provided through Amazon Web Services. When Sony released limited details of the specifications for its PlayStation 5, the company announced that it would use a solid state drive (SSD) to provide loading speeds that are 19 times faster than its existing PlayStation 4 to enhance graphics performance significantly.

Mark Skousen, who leads the Forecasts & Strategies investment advisory service, recommends Microsoft as one of his favorite companies and pointed out its more than 33% rise after announcing “two impressive quarterly earnings reports in 2019.” In the most recently completed quarter, Microsoft’s earnings per share jumped 20% to $1.14, far ahead of Wall Street expectations, he added.

The gains have been fueled by Microsoft’s growth of its cloud computing businesses. Azure sales have advanced more than 70% this year alone, making Microsoft the world’s #2 cloud computing company behind Amazon. Microsoft highlighted its AI Builder, which develops apps that don’t require much coding, to compete with Salesforce.com and Google, Skousen said. 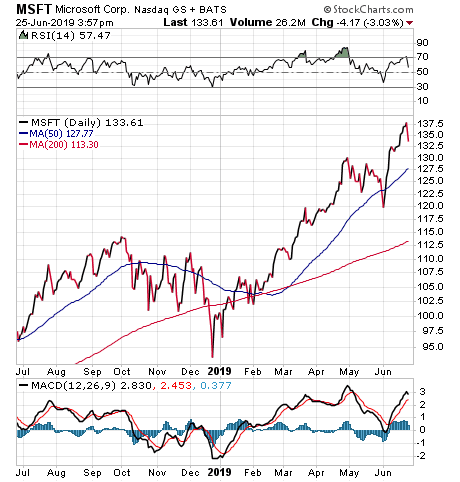 Third Point, led by its founder and Chief Executive Officer Daniel Loeb, offered ideas to unlock Sony’s true value for its shareholders by spinning off its semiconductor company and publicly listing it in Japan; by positioning it as a top global entertainment company; by optimizing its capital structure; and by possibly divesting its public equity stakes in Sony Financial, M3 Inc., Olympus and Spotify.

“Today, Sony trades at roughly half our estimate of intrinsic value, with additional upside from optimizing capital allocation,” according to Third Point’s June 13 letter to investors.

Third Point has invested $1.5 billion in Sony because the hedge fund considers it one of the most undervalued large-cap companies in the world, according to its letter. Sony’s valuation does not reflect either the company’s businesses or the opportunity to create meaningful, long-term value through targeted capital allocation and further operational improvement, according to the letter.

“We rarely find companies like Sony that have a depressed valuation, high-quality underlying businesses, numerous options for portfolio optimization and a capable management team,” according to the letter.

Third Point wrote that Sony’s “valuation discount” of just 11 times earnings is due to its “portfolio complexity,” which will be a continuing problem unless it is addressed.

Loeb is no newcomer to trying to influence Sony’s management, since he sought to do so with a May 14, 2013, letter that urged the company to take action to enhance its value. Those key proposals included taking 15-20 percent of Sony Entertainment public and focusing on industry-leading businesses to aid the growth of Sony Electronics.

Other Ways Exist for Sony to Enhance Shareholder Value

“Sony is definitely undervalued depending on how you slice up the parts,” said Hilary Kramer, a Wall Street money manager who leads the Value Authority, GameChangers, Turbo Trader, High Octane Trader and Inner Circle advisory services for individual investors. “That’s been true for ages, with the core strategy revolving around spinning out sluggish slices of the conglomerate in order to keep the focus on the hot spots and, more broadly, avoiding getting stuck in an increasingly irrelevant past.”

Third Point’s Dan Loeb “loves the semiconductor business” as a standalone stock, said Kramer, who added she agreed “in theory” but is not convinced this is the right time to list what’s essentially a smartphone camera component company on its own.

“If global phone sales have plateaued, Sony Semiconductor can shelter in the parent company’s massive shadow until the cycle turns back in its favor,” Kramer said. “Without that shadow, it could be a gloomy couple of years ahead. Furthermore, the moves Sony has been making suggest that imaging sensors are central to its strategic evolution.

“Teaming with Microsoft on artificial intelligence is only meaningful if Sony can contribute the eyes that gather visual information and use Microsoft systems to see more efficiently. That’s about better cameras, image recognition and other applications that become irrelevant to the parent company if spun out now. After all, the real long-term prize isn’t making phone cameras smarter. It’s about the visual dimension of the Internet of Things, and right now rivals like Intel have the upper hand there through acquisitions like Mobileye. Microsoft wants to compete aggressively in that business. My sense is that Sony does, too.”

Kramer opined she suspected that the collaboration with Microsoft on game development is about transcending the console in favor of streaming content and ultimately something like “augmented reality” entertainment systems. Once again, that means keeping the visual sensors right where they are, because otherwise Sony would be spinning out the “compelling technology” and keeping everything else in an increasingly stagnant corporate structure, she added.

Sony’s leadership has seemed much more eager to spin out the slow-growing subsidiaries, while keeping its gaming, music and entertainment businesses, Kramer said. Loeb may want Sony’s semiconductor business to trade on its own because he isn’t remotely interested in anything else and can’t wait to carve out a pure play, but Kramer voiced a preference for dumping phone manufacturing and phasing out the game console business after the PlayStation 5 launch next year.

Sony may want to collaborate with Microsoft on a combined hardware platform but unless the manufacturer can contribute the “eyes” in that alliance, it will be the “weaker” partner.

“You’re going to need a better business to make shareholders happy,” Kramer said. “Gaming is the strongest piece of Sony. They’re not going to surrender it to a rival on inferior terms. I think the future of gaming is vision, both the literal way the sensors interpret and transmit visual information and the way management needs to think beyond the box.”

In a lot of ways Sony is a lot like Apple (NASDAQ: AAPL) in its weak phases: grinding to maintain margins on a deteriorating consumer electronics business while reaching for much more robust entertainment and other service-driven relationships, Kramer said. The PlayStation is already less of a product in itself than a delivery system for getting entertainment content into the homes of 100 million users around the world, she added.

“That reminds me of where Apple wants the iPhone to go,” Kramer said. “Sony has music but spun out the speakers years ago. Let the PlayStation go one more generation and then let go.”

Third Point’s Suggested Changes May Not Be Adopted

“The plan is creative and sensible,” said Bob Carlson, who heads the Retirement Watch investment advisory service. “Unfortunately, it’s unlikely Sony will implement any portion of it any more than it did the previous proposal.”

Sony is engaged in business strategies to expand its fast-growing Game & Network Services segment and could forge a partnership with Microsoft to speed up its progress. The enhanced shareholder value that Loeb has been seeking to unlock may start to occur if that business segment fulfills its promise, whether his other ideas are adopted or put off as occurred when his earlier attempt in 2013 failed to gain traction.

share on:
Exclusive  How To Be the Lead Mare