It shouldn’t matter whether you’re a red or blue state kind of person when it comes to picking up piles of greenbacks from Obamacare, one of the biggest bits of U.S. government to come from Capitol Hill.

Obamacare is going to cost the nation an untold number of billions upon billions of dollars. And in reality, Obamacare is far from a finished program ready to be rolled out. One example includes the Federally Facilitated Exchange (FFE), which somehow is supposed to provide insurance markets for Americans who are forced to buy coverage. Penalties for non-participation would be enforced by the Internal Revenue Service (IRS).

States are ordered to come up with a response to how they are going to deal with the mandated exchanges by Dec. 14 and report to the Department of Health and Human Services (HHS) and its current Secretary Kathleen Sebelius.

So far, 17 states and Washington, D.C., plan to form their own exchanges. Five more states intend to come up with some sort of a partnership, while 20 states are standing pat and not planning to comply. The remaining eight states haven’t done anything – remaining undecided.

The key is that the exchanges are mandated. They will be launched and operated, unless Congress and the president change the law. So, how about making some personal profits from this expanded role of government?

With the federal government forming the single-largest component of the U.S. economy, it is not folly to take advantage of Uncle Sam to make some money.

Many companies are spending countless millions of dollars on lobbying and influence-peddling to gain footholds, deals to keep the government from harming their interests or, even better, to make billions of dollars from deals that drive business.

And for Obamacare and its Federally Facilitated Exchange (FFE), one company did a quiet series of deals to make a boatload from the new mandates.

These deals were all happening right in the weeks leading up to the election. Of course, if it were made public, just imagine how it might have played out in the pre-election news and debates.

The HHS Secretary and the administration knew the risk of bad publicity, so UnitedHealth and its new Quality Software subsidiary allegedly were told not to disclose the selection process for the Federal Exchange contract and not to disclose the full details of the acquisition, according to recent news reports.

This situation, of course, might be disturbing to investors as well, as taxpaying voters — as it appears the government was hiding the deal and the potential impact to the markets and politics. So, now the Securities and Exchange Commission (SEC) is supposed to look at the deals — but since it was blessed by the administration and there are documented letters of instruction — don’t expect much to come of it.

The real deal, of course, isn’t just the nice contract to facilitate the Federal Exchange that will be providing services to millions and millions of Americans — but rather that the subsidiary of UnitedHealth will be privy to a treasure trove of data that will be used to make the company’s healthcare insurance more competitive.

Even before the Obamacare business, United Health continued to perform. Revenues are rising at an average annual rate in excess of 8%. Moreover, as customers and contracts come in — they stay — with a retention rate of more than 87%.

And even with the restrictions on margins imposed by Obamacare — the company makes the most with margins running near double-digit rates – generating a return on stockholder’s investment in the company at rate of nearly 20%.

With lots of cash flow and a well-run portfolio, the insurer has little debt, with debt to assets running at a mere 17%.

All of this growth reflects in the performance of the stock. UnitedHealth for the past three years has generated a total return in excess of 85% — more than double the return of the healthcare segment of the market as tracked by Standard & Poor’s and its healthcare index. Even with a less than generous yield running at over 1.6% — the company generates gains to protect your portfolio’s overall health against inflation.

And, while the stock has performed well, it still is a value. UnitedHealth trades at a discount to its trailing sales by 50% and it trades at a minor premium to its book of assets by 1.7 times, which is right on the average for its peer group, despite its outperformance in the market price.

The company, while having a proven track record of working well with the government, did try to walk down the optimist views of its prospects for the coming year in its recent investor conference presentation. Perhaps it doesn’t want to see itself pulled into a Congressional review for being too smug or too big a part of the whole Obamacare plan.

The result was a small pull-back from its upward stock price march. This retreat gives you a good opportunity to buy a little UnitedHealth and profit from Obamacare under 60 dollars a share. 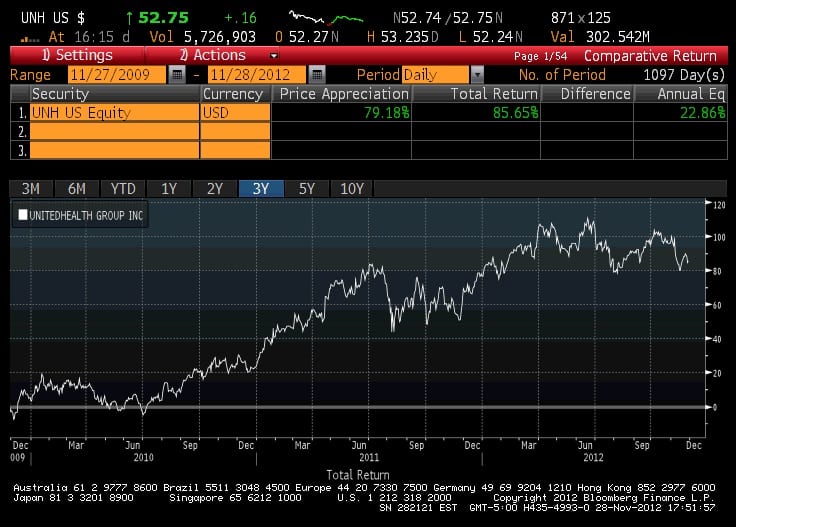 Molecules From the Healing Gods

Invest in Global Health Care with This ETF