There is widespread consensus that interest rates and bond yields are going to remain low for a long time, maybe several years, as inflationary pressures are generally absent in most goods and services markets, except for health care and real estate.

As the U.S. stock market contends with new circumstances surrounding the impeachment inquiry, White House threats to limit investment into China and slowing factory output, market volatility has returned with a vengeance.

The semiconductor space has shown leadership among all other tech sub-sectors for most of 2019, right up until late last week when the rolling correction within the software, networking, social media, fintech and e-retail stocks finally exacted some sharp pain in the chip and chip equipment stocks.

As an industry, it is highly cyclical and tends to be a leading economic indicator. Most semiconductor analysts agree the sector is bottoming during the second and third quarter of 2019, with demand set to rebound in fourth-quarter 2019 and first-quarter 2020. Hence the sharp rally in most of the leading names following the steep market sell-off in May. In fact, the chip sector traded to a new all-time high in July, followed by yet another pullback in the weak month of August that led to a sharp rally attempt right after Labor Day.

“While global semiconductor sales in July were once again down on a year-to-year basis, month-to-month sales were up slightly,” said John Neuffer, SIA president and CEO. “Month-to-month sales increased modestly across most regional markets in July, with Asia Pacific and the Americas posting the largest gains, although sales into the Americas remained down on a year-to-year basis.”

The assault on the semiconductor sector had the look and feel of “they finally went after the good stuff” price action. The selling of the chip sector last week was, in my view, a sign of the beginning of the end of the current tech correction that has hammered the high-beta Software as a Service (SaaS) cloud stocks the hardest. A view of the one-year chart of the VanEck Vectors Semiconductor ETF (SMH) shows a very constructive back-and-filling process where shares of SMH filled the breakout gap of early September.

SMH shares represent the biggest and most widely-held names in the sector and now sit right above their 50-day moving average — a healthy technical situation. Assuming my view of the current pullback as a short-term event before the sector trades to new highs is accurate, it would behoove investors looking for high-tech, high-growth yield to consider some of the leading stocks in the semiconductor sector for yield and growth.

If, in fact, the semiconductor cycle is set to rebound sometime during the next year, these companies and many others will see earnings rise sharply that will lead to a raising of their dividends to reward shareholders. “While global semiconductor sales in July were once again down on a year-to-year basis, month-to-month sales were up slightly,” said John Neuffer, Semiconductor Industry Association (SIA) president and CEO. “Month-to-month sales increased modestly across most regional markets in July, with Asia Pacific and the Americas posting the largest gains, although sales into the Americas remained down on a year-to-year basis.” 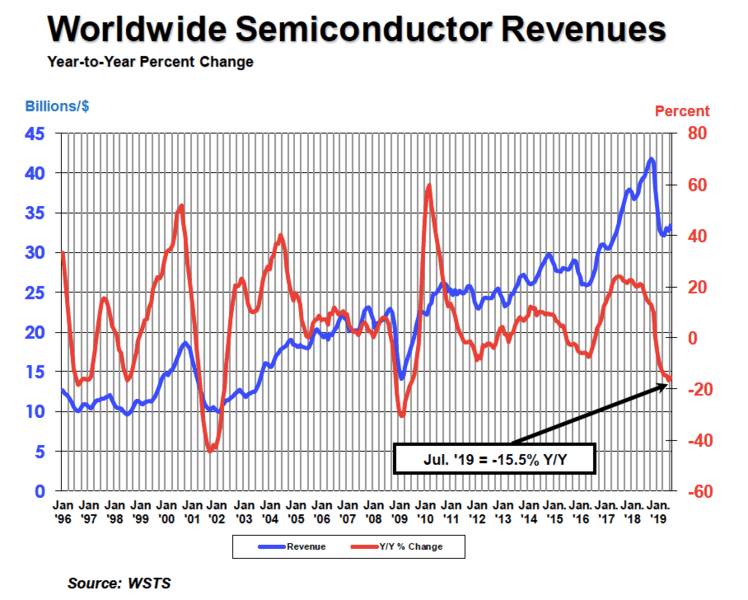 The recent softness in global semiconductor sales is being attributed to a China trade war debacle, slowing global smartphone growth, a decline in global PC and laptop shipments, the collapse in cryptomining and some slowing in growth from the booming data center buildout. Again, with the next set of transformational technologies all set to explode over the next five years, I believe using this current volatility in the chip sector is a big opportunity to add yield and growth to portfolios.

On that note, I want to bring to your attention a high-yield, income-generating strategy being used by major banks like Wells Fargo and Bank of America. In fact, I call this strategy “the safest and easiest 8.53% you’ll ever make on your money.” Follow this link for all the details.

My Hi-Tech Trader weekly advisory services employs an AI-driven algorithm that targets only leading tech stocks for bullish price action over an average 22-day holding period. I recommend a stock and a corresponding call option to serve both stock and option investors. So far, my trade recommendations are making money 87% of the time and doing so with regularity. And part of this torrid winning streak involves stocks within the semiconductor sector.

To learn how to put Hi-Tech Trader to work in your portfolio and catch the coming bull market in the chip sector with conviction, click here now.