We all know that government pensions cost taxpayers plenty, so here’s how to make back some of your tax dollars and more.

It’s good to work for Uncle Sam, especially with his fat pension programs. But there is a way to make some of that money back, if you understand how a major part of the U.S. government retirement and pension system works.

If you follow my advice, you can cash in on one of the more generous government programs around. For millions of federal workers, the core of their pension money is in the US. government’s Thrift Savings Plan (TSP). With millions of employees getting paid billions of dollars in salaries and benefits, along with retirement cash contributions, the TSP is big.

So who runs one of the biggest retirement investment funds for those well-pensioned government folks?

While, the plan is administered by the Federal Retirement Thrift Investment Board — supposedly with less than 100 folks on its payroll — it doesn’t actually manage the assets.

Instead, the real management is done by the private sector that’s paid millions of dollars of fee income. And the company that runs the bulk of the TSP is one that will help to pay for your own retirement.

Blackrock (BLK) is the company running the pension funds — which are only getting bigger. And Blackrock should continue to get more fat checks from the U.S. federal government for management, since the investment firm is politically plugged in and not just with the U.S. government, since one of the company’s top shareholders is none other than the Chinese government.

While the federal pension assets are a nice business to get more of, when you then add in the 5.3 million state and local government employees that also have pension plans – this is a very good growth industry to be invested in for your retirement.

This pile of cash means large and steady flows of management fees. And unlike hedge funds, pension fees aren’t based on performance, but rather on the size of the pension fund. So, whether the S&P 500 goes up, down or nowhere — the fund management company gets fat checks by skimming a little off of every dollar under the control of its management.

And those pension assets are just the beginning for Blackrock, with more than $3.7 trillion under direct management and over $12 trillion under advisement contracts overall. Blackrock collects a vast and rising amount of fee income — including fees paid from the U.S. federal government.

Overall, Blackrock runs or advises nearly 6% of the world’s financial assets and the investment firm keeps building on those assets with a steady overall growth rate. With one of the higher asset retention rates for its peers — once the assets come into the firm, the majority stay producing regular streams of management fees.

And while the gains have been coming for Blackrock including the past year’s return in excess of 17.7%, the company also shares some of the fee income via its dividend which currently is about 3.1%. Make Blackrock a buy under $209 a share and earn a bit back from those generous government pension benefits. 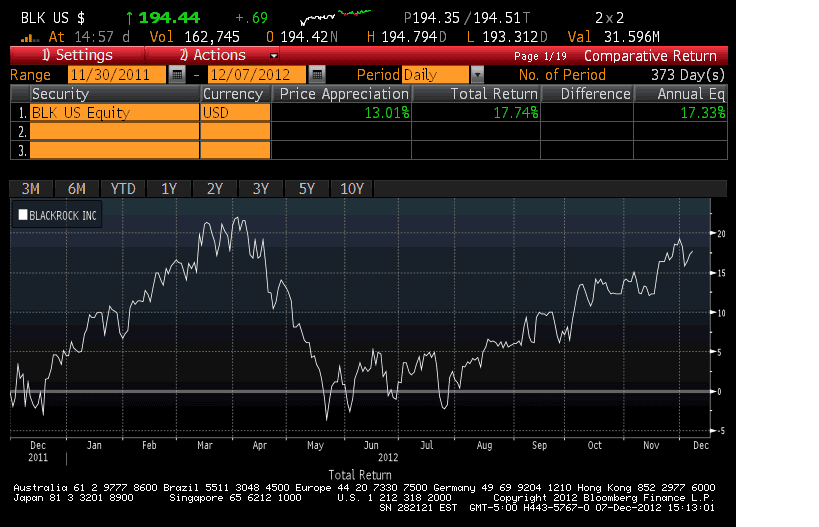