Stocks to buy to profit from the adoption of 5G services include semiconductor and telecommunications equipment companies, as well as an under-the-radar satellite manufacturer and services provider.

The term 5G stands for fifth-generation cellular network technology that is intended to offer vast improvements in download speeds and to facilitate expanded use of the internet of things (IoT), which encompass mobile phones, gaming devices and other electronics that need additional bandwidth. A study by the TMG consultancy for the GSMA, which represents more than 750 mobile operators worldwide and organizations in related industry sectors, estimated that 5G is expected to yield $2.2 trillion in gross domestic product (GDP) and $588 billion in tax revenue between 2020 and 2034.

Indeed, 5G is expected to deliver substantial network improvements that will feature enhanced connection speeds, mobility and capacity, along with reduced latency for downloads that will enable new applications for a variety of industries. In the United States, the Federal Communications Commission (FCC) Chairman Ajit Pai tweeted on Nov. 18 that he decided that the agency should hold a public auction of the 280 megahertz spectrum of the C-band that previously had been allocated to satellite operators to provide video and radio programs to the United States.

A C-Band Alliance, consisting of satellite, wireless and other telecommunications companies, had been seeking FCC permission to share the spectrum and for satellite operators to be paid by the others via private auction to accommodate their 5G spectrum needs. However, Pai’s plan bypassed that proposal and called for splitting the revenue from a public auction between the federal government and the satellite operators.

Fixed satellite services giant Intelsat (NYSE:I) plunged in price 40.1 percent on Nov. 18 and 24.2 percent on Nov. 19. So far in November, Intelsat shares have dropped 75 percent, while the France-listed shares of rival satellite operator SES have lost 35 percent, even though the S&P 500 Index climbed 2.8 percent during the same time. 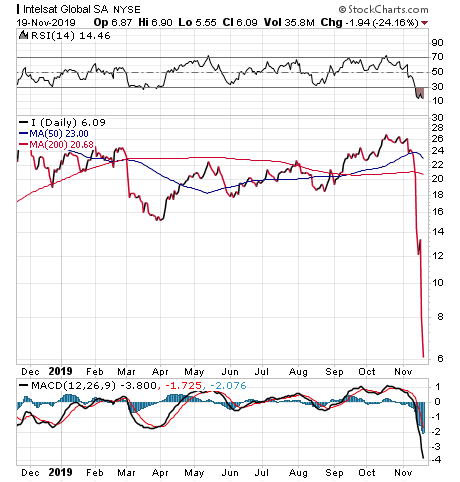 The millimeter wave (mmWave) band of 5G applications will make up an increasing proportion of the overall 5G contribution to global GDP, achieving around 25 percent of the cumulative total by 2034 to produce $565 billion in GDP and $152 billion in tax revenue, according to the GSMA study.

“What is becoming quite clear following the third-quarter reporting period is that the launch and subsequent rollout of 5G technology is happening faster than the stock market has anticipated,” said Bryan Perry, who is tracking the developments closely for subscribers of his Hi-Tech Trader advisory service. “Notable early winners include Qualcomm Inc. (NASDAQ:QCOM), which issued solid guidance for a strong fiscal Q1 despite ongoing disputes with Huawei. The company is forecasting 200 million 5G devices will be shipped in 2020 that will provide a major revenue stream as Qualcomm’s chip technology will capture a huge slice of the smartphone content market.”

Perry recommended the sale of Qualcomm stock to notch profits of 16.44 percent for subscribers in his Hi-Tech Trader service after just 24 days. Related call options he recommended produced a 251.35 percent gain within only 21 days. Even though Perry opted to have his subscribers take profits in both the Qualcomm stock and call options, he told me he will look for a pullback in the company’s share price to recommend it again as the transition to 5G gains momentum. 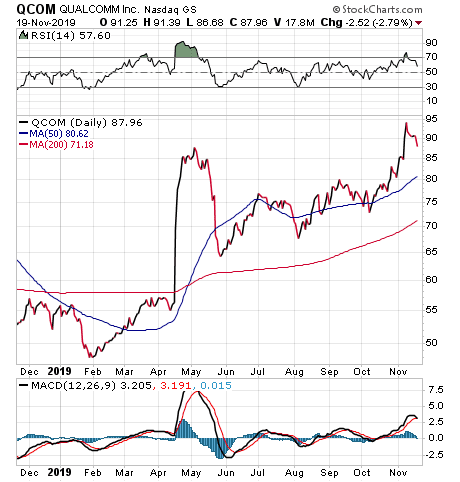 New 5G networks will launch innovations not only to enhance today’s mobile broadband services, but also to support a variety of devices and services with improved performance, efficiency and cost effectiveness. Qualcomm officials opined that 5G will redefine a broad range of industries, including retail, transportation, entertainment and education, with connected services that one day may show the new-generation technology to be as transformative as the invention of the automobile and electricity.

A Qualcomm study concluded that 5G’s full economic effect by 2035 has the potential to produce up to $12 trillion worth of goods and services from a wide range of industries. The 5G value chain, including original equipment manufacturers (OEMs), content creators, app developers and consumers, alone could drive up to $3.5 trillion in aggregate revenue by 2035 and create up to 22 million jobs, or the equivalent of more than one job for every person in Beijing, China, the study found.

Perry also expressed optimism about the prospects for another stock that could benefit significantly from the 5G adoption wave.

Teradyne manufactures testing equipment for semiconductor companies, and its management mentioned in the company’s third-quarter earnings call that demand for 5G testing equipment was particularly strong. Its management raised Q4 earrings guidance from $0.61 per share to $0.73-$0.84 and hiked revenue guidance from $535.51 million to $590-$630 million.

“From all the earnings guidance releases from the third quarter, this was in my view one of the top five most impressive guides that should fuel the shares for further gains,” said Perry, who recommends both stocks and options in his Quick Income Trader and Instant income Trader services. 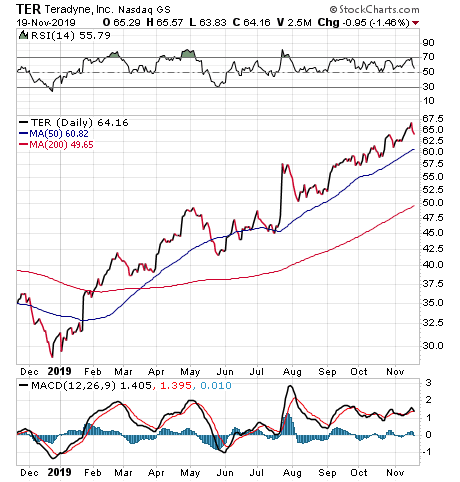 Key Teradyne products that will help it tap into the 5G bonanza are its UltraWaveMX44 and UltraWaveMX20 instruments to improve the quality and reduce the time to market for semiconductor devices that will be used in the emerging millimeter wave (mmWave) band of spectrum between 30 gigahertz (Ghz) and 300 Ghz. The MX44 and MX20 are designed to extend the UltraWave24 capability for full test coverage of IoT, WiFi, LTE, Ultra Wideband and 5G standards. 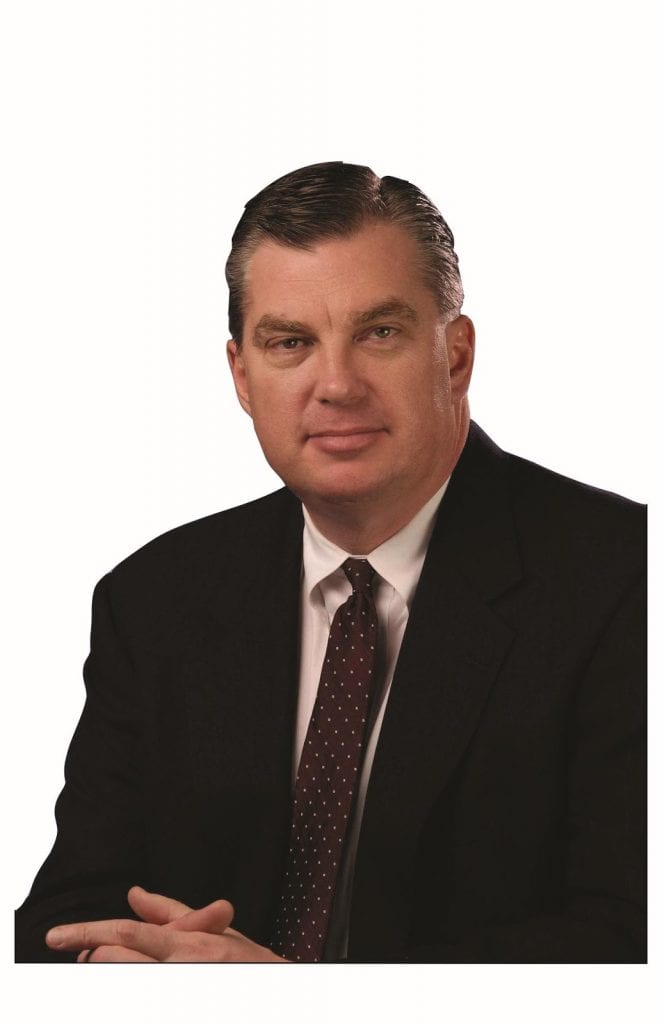 Verizon, AT&T are Stocks to Buy to Profit from 5G

Stocks that should gain the most from 5G include telecommunications service operators, such as dividend payers Verizon (NYSE:VZ) and AT&T (NYSE:T) that will provide the capabilities to the public, and distributors and their hardware and software components that will help deliver 5G to the public, said Jimmy Schaeffler, a senior analyst at the Carmel Group, a telecom industry research firm in Carmel-by-the-Sea, California. 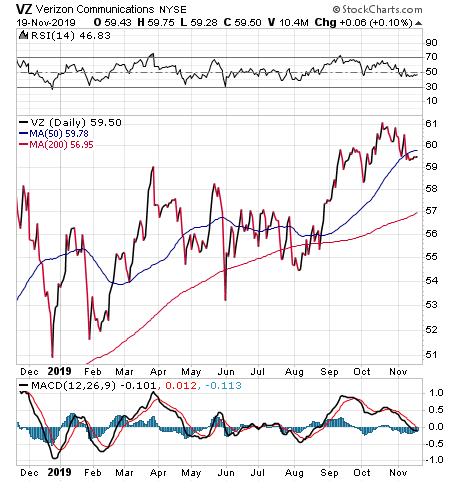 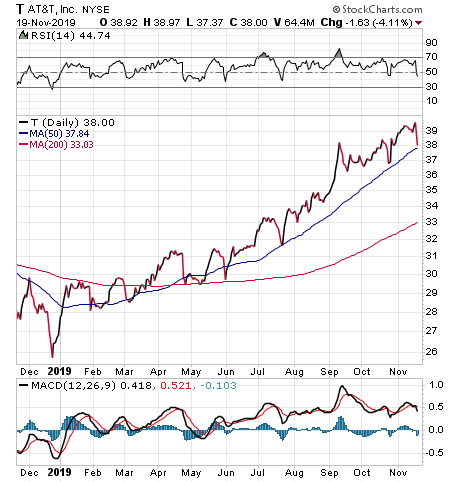 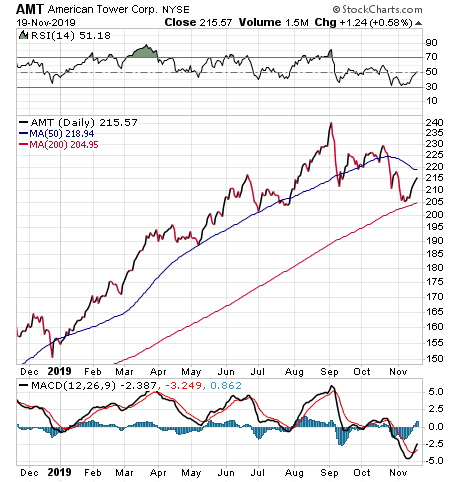 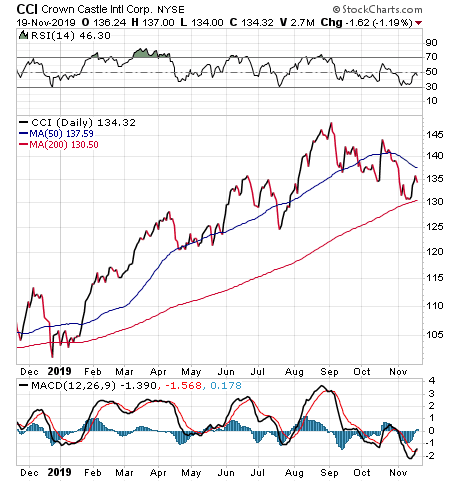 Intelsat Is a Long-Term Stock to Profit from 5G

Exclusive  Tesla’s Profitability Promises are Due for Delivery

Traditional fixed satellite services operator Intelsat’s freefall this month does not indicate it will be a permanent victim of the FCC’s decision to arrange a public auction with half the money going to the federal government rather than all of it going to satellite companies. Despite Intelsat’s big drop, Evercore ISI analyst James Ratcliffe’s Nov. 18 downgrade of the stock to “in line” from “outperform” and his cut in its price target by more than two-thirds from $38 to $11 would let new shareholders nearly double their investment at its current price of about $6.

JPMorgan had boosted its price target for Intelsat to $32 from $27 on Sept. 19, after concluding the Federal Communications Commission was progressing toward allowing the auction of 280 Mhz of C-band spectrum in 2020 for roughly $26 billion. A JPMorgan research at the time estimated that Intelsat could receiving net proceeds of around $8 billion, or about $45 per share, for its C-band spectrum holdings. The FCC decision wiped out the potential windfall and left Intelsat shareholders to ride the stock down or dump it along the way.

“More launches mean more money flowing here, and until very recently Wall Street and management alike valued that business close to zero,” said Kramer, whose 2-Day Trader service has notched 19 out of 24 profitable trades with an average return of 8.11 percent and a hold time of 1.1 days since its launch. “Any movement at all here will be constructive.”

This satellite company’s manufacturing business will sell the “picks and shovels” orbital prospectors need to extract data and communications services for telecommunications carriers that are desperate to add 5G to their array of existing services, Kramer said.

“This is not a story that takes companies from $0 to $50 billion, said Kramer, whose GameChangers advisory service has booked 33 profitable trades in its last 39 closed positions. “It provides a little more for existing giants.”

DigitalGlobe, SSL and Radiant Solutions became unified under the Maxar brand in February 2019, while MDA continues to operate as an independent business unit of the parent company. Canadian-based satellite operator Telesat is part of SSL. 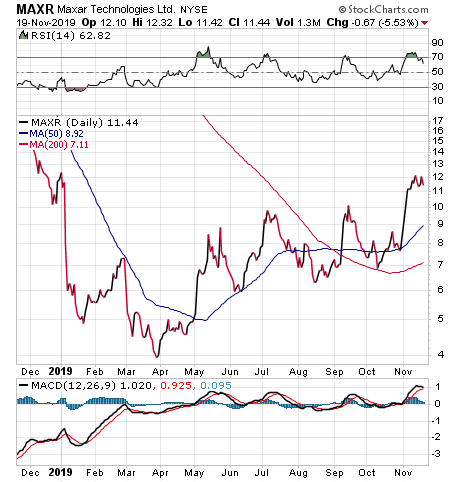 As for Intelsat, it could be time to buy for those willing to hang on for the “very long haul,” said Kramer, who also leads the Turbo Trader, High Octane Trader and Inner Circle advisory services.

“I’ve watched some of these companies take decades to deliver, so if you have that kind of mindset, every big dip is a buying opportunity,” Kramer said. “These are the kinds of stocks that people early in their careers can profitably overweight in retirement accounts and forget about until the payoff comes. The flip side applies on the consumer end of the industry, where the transition from 4G to 5G really only keeps powerhouse stocks like Apple (NASDAQ:AAPL) relevant without creating a strong long-term incentive to buy.” 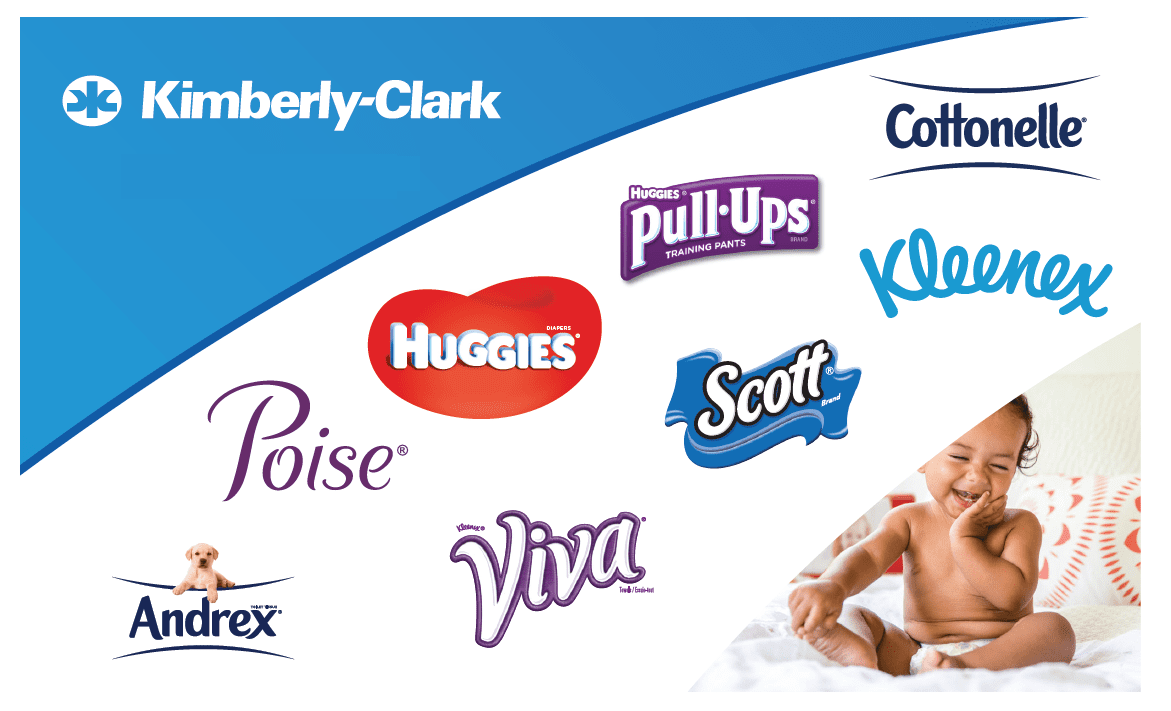 After suffering a share price decline of nearly 30% over a two-year period that began in April 2016, the Kimberly-Clark Corporation (NYSE:KMB) has recovered all those losses and pushed its share price to new all-time highs to reaffirm its reputation of delivering robust long-term total returns. In addition to the share price advancement, Kimberly-Clark has been paying dividends for more than eight decades. Moreover, the company has boosted its annual dividend distribution for more than half t