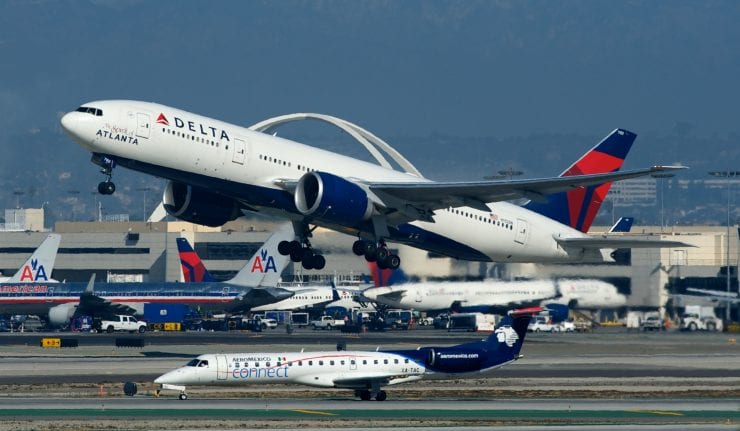 Beaten down, bailed out and now shunned by many investors, airlines are facing powerful financial turbulence from the effects of COVID-19.

Much commercial air travel has been grounded and left airline shareholders to wonder when the stocks of the major carriers will ascend again. U.S. airlines collectively are slated to receive around $60 billion in total bailout funds as part of the Coronavirus Aid, Relief, and Economic Security (CARES) Act passed by Congress and signed by President Trump.

But billionaire investor Warren Buffett announced that the Berkshire Hathaway (NYSE:BRK.A) company he leads as chairman and chief executive officer sold its sizable positions in four major U.S. airline stocks to completely pull back from the industry altogether. In Buffett’s view, the headwinds facing airline stocks seem too treacherous to patiently wait for the business outlook for the companies to clear ahead.

The key questions now are, when will the airline industry begin to recover, and how?

During Berkshire Hathaway’s recent virtual annual meeting, Buffett said that he made a mistake in holding his airline industry stock positions. He did not predict whether or when the airlines might recover with COVID-19 still infecting and killing people.

“The world has changed for airlines, and I wish them well,” Buffett said.

Investment guru Bryan Perry was quick to report the effects of the Buffett’s decision to sell in his Quick Income Trader advisory service.

“Delta Air Lines (DAL) was trading well until it was reported Warren Buffett sold all his airline holdings this past week,” Perry commented. “This news really beat down the sector and will take some good news on upbeat bookings to get the stock back up and running.”

Perry viewed Delta’s stock as a trading opportunity, recommended May call options on the related shares in his trading service, and is looking to close the trade for a profit. That service uses a system Perry developed to produce regular cash payments every month by selling out-of-the-money call options on a select group of well-known stocks. 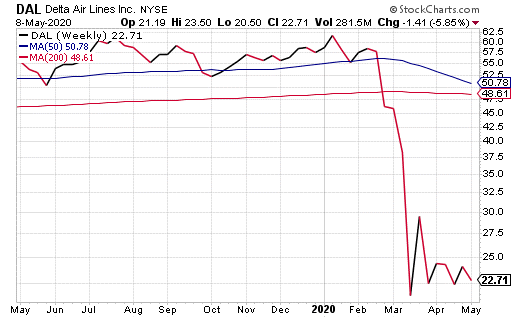 Even without a clear rebound taking hold with airline stocks or other investments battered by the effects of COVID-19, trading opportunities do exist for investors willing to take heightened risk with call and put options. But Buffett likes to buy great stocks and hold them, so options trading is not his forte.

As for stocks, their prices rise and fall with investor reactions and they can be unpredictable. One often-effective strategy is to invest as a contrarian, buying stocks that appear unloved and selling them just before they top out.

Mark Skousen, another investment expert, the author of more than 30 books and the leader of his monthly Forecasts & Strategies newsletter, commented that airline and cruise stocks are currently “dirt cheap.”

His main question, regarding those two industries, now remains, “Are they at or near bottom now that Warren Buffett has sold out of airline stocks?”

Airlines have received nearly $60 billion in financial assistance as part of the CARES Act. The bill, which President Trump signed into law on March 24, granted $25 billion in loans, and loan guarantees, for passenger airlines alone. The federal aid is intended to pay workers and keep their jobs intact until September.

Monday, May 4, offered a strong reflection of Buffett’s decision for Berkshire Hathaway to sell airline stocks. Shares of Delta, American and United all opened trading down more than 14%, and Southwest was off its recent prices by 9.3%.

The markets open on May 6 proved that Monday’s declines were not quite finished, with American Airlines’ stock closing at its lowest price since December 2013, when it restructured its trading form. Delta stocks followed suit and shares closed at their lowest since December 2013 as well. Southwest was not far behind with stock prices falling to a six-year low.

Cowen analyst Helane Becker recently said that most airline management companies are beginning to realize that that passenger traffic will not be quick to recover, and that’s in part due to the country reopening at different times.

“Until various quarantines are lifted, and most people get back to work, we do not see any recovery for air traffic,” Becker said.

Major airline companies have government aid and financial liquidity, what they need now, are passengers. Only time will tell how deep traveler fear lies. For patient investors, 2021 might show recovery and reward.

Though headlines have been negative for the “big four” airline companies that were banished by Buffett, their outlook may not be as dismal as has been projected. American Airlines is currently trading at its lows. Yet according to YahooFinance, the Wall Street consensus suggests that the airline is a “sell” for investors. Conversely, this may make it a “buy” for other investors, since on average, analysts forecast the stock, which opened Monday at $9.25, could potentially shoot forward to $13.82 within the year. That could reward new investors handsomely. 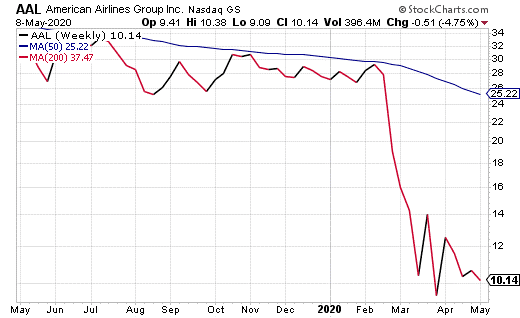 In April, United Airlines, issued additional shares of the company in an effort to protect themselves from the COVID-19 crisis and maintain some form of liquidity. The company ultimately decided that a secondary offering could be the way to raise extra funds needed. The secondary offering came in the form of 39 million of its own shares.

The offering was priced at $26.50 a share and was to close on April 24. The airline’s goal was to raise $1 billion after the company’s earlier reporting showed that it had lost $2.1 billion within the first quarter.

However, by April 29, the secondary offering was not selling as planned and the stock price continued to fall. Trading on Wednesday, May 6, showed that the shares were closing at $25.88, or roughly 2.4% below the offering price. 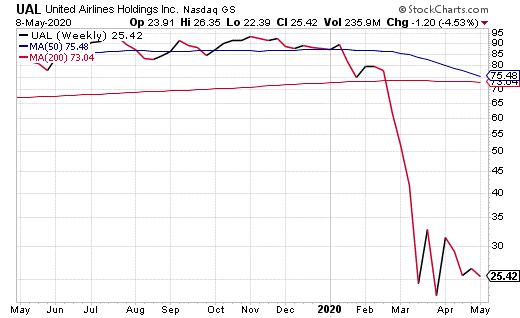 Is the Worst Over for Airline Stocks?

Johnathan Macey, a corporate law and corporate finance professor at Yale University, recently said that the airline company could be signaling to the market that the worst may be over.

If the market views the company as continuing to struggle, a secondary offering may not work, Macey opined.

Southwest Airlines, which received government aid approaching $3.2 billion, is armed to weather a downturn in business, according to the airline’s CEO Gary Kelly, who also is the company’s former chief financial officer.

Though Kelly’s view is less pessimistic than Buffett’s, the airline company will be forced to downsize its number of employees if passenger numbers do not rebound.

In a CNN interview, Kelly said that while the airline has a solid amount of cash now, the company still went through $1 billion in the month of April alone. 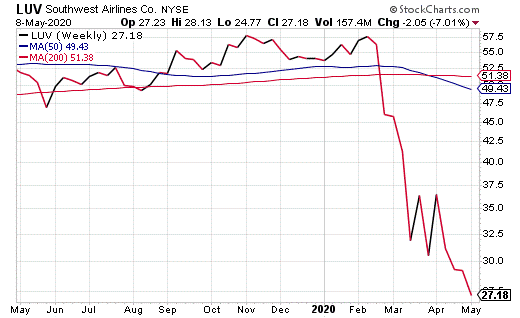 In sum, there is no definite answer for when airline stocks will begin to recover. Forecasters who are optimistic are saying early 2021, while others are not yet giving a date at all. The “how” question seems to be answered in unison across the board. Passenger volume affects an airline’s value. Once normal travel resumes, there may be hope yet for the airline industry. Until that time comes, it may serve investors well to be patient, unless they are ready to pounce like Perry when he sees a short-term trading opportunity that he considers worth taking.

We’ve seen winners and losers emerge among Big Cannabis stocks in recent weeks. The coming wave of earnings reports could finally solidify that trend with differentiated fundamentals. I’m looking for Aurora Cannabis Corp. (NYSE:ACB) to disappoint on Thursday, May 14. Expectations are low, but I think they’re reasonable. Even if ACB’s revenue comes in on target, this company is not growing appreciably. Guidance for the current quarter probably points below last year