“Madmen in authority are distilling their frenzy from some academic scribbler of a few years back.” — John Maynard Keynes

One of our keynote speakers at July’s FreedomFest is Allan Lichtman, a political professor at American University and author of the influential book, “The Keys to the White House.” He has the unique distinction of correctly predicting the last nine elections, including George W. Bush in 2000 and Donald Trump in 2016.

His speech topic is “Who Will Win in November? My Surprise Prediction.”

Lichtman’s system is based on 13 keys. Even though the national polls are close right now, he states, “Early polls have no predictive value for the November results. Every president has seen a rise in polling numbers in response to the rally-around-the-flag effect at the early stages of a national crisis.

“The keys are based on big-picture events such as the long- and short-term economy, scandal, social unrest and foreign successes and failures. I still have no final call on the keys as I am waiting to see how events play out over the next few months.”

One measure I watch carefully is the election betting odds. To see the latest scorecard, go to John Stossel’s www.electionbettingodds.com.

A year ago, it showed Trump and the Republicans comfortably ahead in the White House and the Senate, but not in the House.

Still, remember that the election betting odds can change dramatically from week to week.

What It Means for Investors

The best returns are when there’s gridlock, especially with a Democratic president and a Republican-controlled Senate. The average return is 16%.

While we wait, the best investment is two-fold: technology stocks and gold. Online tech stocks have outperformed the market in 2020 and are likely to continue to do so in this never-ending pandemic scare, even if unwarranted.

Gold is likely to produce extraordinary returns due to super-easy money and out-of-control government spending. We recommend both in Forecasts & Strategies.

The Greatest Danger Ahead: Loss of Our Liberties

My greatest fear is excessive government power. As Tuto Quiroga, former president of Bolivia, once said, “More and more, everything is either prohibited or mandated.”

Without any legislative approval, governors and presidents are signing executive orders requiring us to wear masks in public, imposing quarantines on visitors from out of state, banning sporting events, concerts and conferences and tracking those who come in contact with virus carriers.

All of these actions are clear violations of our First Amendment rights to freedom of assembly, free speech and privacy.

There is growing censorship in social media, where Facebook and YouTube, among others, are shutting down people who don’t follow the established line of thinking. It is a serious problem.

Keynes is right. They are “madmen in authority.” If there’s one lesson we have learned from this crisis, it’s that we’ve given way too much emergency power to overweening authorities.

This whole episode reminds me of a quote from “The Maxims of Wall Street.” Sir Harry Schultz warned, “Never underestimate the size of a panic, nor the power of the politician.” (p. 112)

Here are some other quotes that are applicable to today:

“No man’s life, liberty, or property are safe while the legislature is in session.” — Judge Gideon Tucker (p. 146)

And I might add, even when they are not in session, the governor or president can sign an executive order.

“The ultimate result of protecting fools from their folly is to fill the planet full of fouls.” — Sir James Russell Lowell (p. 147)

So true today with all the mandatory rules, such as wearing masks.

“If printing money helped the economy, then counterfeiting should be legal.” — Brian Wesbury (p. 148)

In the past few months, I’ve had subscribers buy multiple copies of “The Maxims of Wall Street.” The quote book, now in its seventh edition, and handsomely printed in green and gold, has been endorsed by Warren Buffett, Jack Bogle, Dennis Gartman, Alex Green, Bert Dohmen and many others.

Rob Arnott, the godfather of smart beta, just bought a whole box, to give out to his best clients and friends. 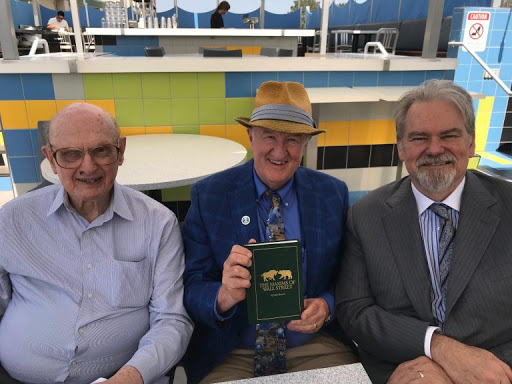 Your editor in between Harry Markowitz, the father of modern portfolio theory, and Rob Arnott, the godfather of smart beta.

I offer a super bargain price for the Maxims. The first copy is $20, and all additional copies are $10 each. They make a great gift to friends, family, clients and investors.

I autograph each copy, number them, and mail them at no extra charge. If you order a box (32 copies), you pay only $300.

Jack Bogle, the legendary founder of the Vanguard Group of Funds, wrote, “What a treat! It’s great to have all these sayings in a single spot.”

“Today more and more of everything is either prohibited or mandated.” — Jorge “Tuto” Quiroga, former president of Bolivia (2001-2002)

Recently several states (California, Nevada) and counties (Orange County, Florida) have mandated that everyone must wear a mask. “Masks save lives,” states Governor Sisolak of Nevada.

But there’s a big difference between persuading people to wear a mask and forcing them. Mandates come from “big brother” authoritarians. Forcing people to do the right thing is a sign of failing to build a civilized society.

“The triumph of persuasion is a sign of a civilized society.” Read my pamphlet, “Persuasion vs Force” here: http://mskousen.com/articles/politics-and-liberty/persuasion-vs-force-by-mark-skousen/.

It is becoming clear that America is no longer the land of the free and the home of the brave.

Thankfully, California is not enforcing the mandatory mask requirement. Besides, there are legitimate health reasons for not wearing a mask. In fact, people who have health-related problems associated with wearing a mask are exempt.