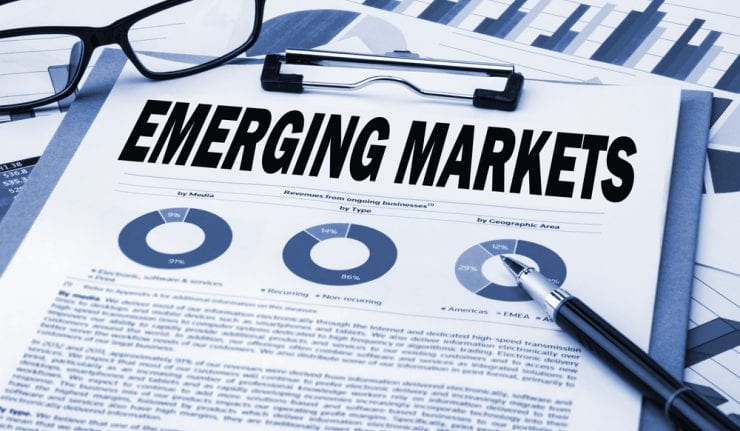 This past weekend, Bloomberg ran a front-page story about the sudden appeal of emerging markets, led by a resurgence in China’s economy.

Bullish sentiment toward the Chinese economy propelled the yuan to its best week against the dollar since December, while an index of blue-chip Chinese shares (Shanghai 50) soared by more than 15% to its highest level in five years. Jawboning by the Chinese government through a state-sponsored journal on the importance of “fostering a healthy bull market” helped spur the move, said Ray Attrill, head of FX strategy at National Australia Bank (NAB), in a research note.

“Shades of John F. Kennedy’s, ‘Ask not what your country can do for you’ inauguration speech here and as close as you might get to a Chinese government ‘put’ as anything the Fed has done to date vis-à-vis the U.S. stock (and credit) markets,” he said in his description of the Chinese report.

Investors seeing China and emerging markets as a new opportunity are putting aside the worrying rise in COVID-19 cases and opting for the positive narrative taking hold in developing economies. Here’s why. China’s economy probably returned to growth in the second quarter, and that data will be released this Thursday — that gross domestic product expanded by 2.2%, following the historic 6.8% collapse in the first quarter.

Almost out of nowhere, shares of the most actively traded emerging market security — iShares MSCI Emerging Markets ETF (EEM) bolted up and through their 200-day moving average with the 20- and 50-day moving averages in the process of forming a “golden cross” pattern. This is a textbook bullish formation that points to further gains ahead. 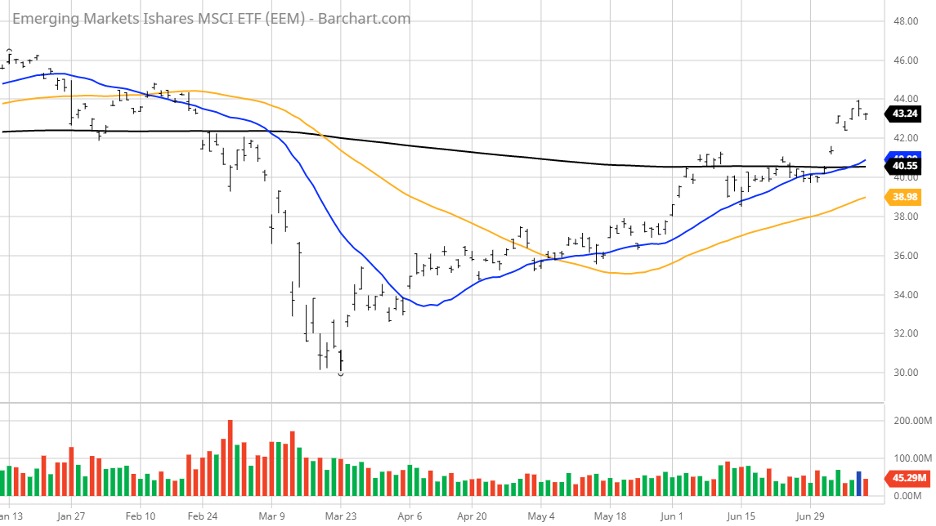 As the leading benchmark for trading emerging markets, shares of EEM are up 17.67% year-to-date, led by a clean upside breakout in China’s market and American depositary receipts (ADRs). So much for last week’s rhetoric about the Phase Two part of the trade deal with China not materializing. The market doesn’t seem to care.

For the uninitiated in this sector, the MSCI Emerging Markets Index stands for Morgan Stanley Capital International (MSCI) and is an index used to measure equity market performance in global emerging markets. It is just one index created by MSCI, which has been constructing and maintaining them since the late 1960s.

According to its fact sheet, the MSCI Emerging Markets Index captures large and mid-cap representation across 26 emerging market countries. With 1,385 constituents, the index covers approximately 85% of the free float-adjusted market capitalization in each country. Hence, it is the best gauge for measuring a broad global economic recovery.

So, while this new-found love for emerging markets is springing up like wildflowers, it also presents new opportunities for income-oriented investors who are looking for yield with a fresh tailwind. Having traded debt from several markets outside the United States, the biggest obstacle is getting good and reliable information. Researching foreign entities is a tall order and data-driven research is not readily available.

To keep it simple for the retail investor, I suggest considering exchange-traded funds (ETFs) where those companies do have the internal research staff to ferret out the best income-based opportunities and balance yield with risk-on growth potential. To this end, there are a few emerging market dividend ETFs that are all down more than 15% year-to-date that offer compelling yields where fund flows have turned suddenly bullish.

The chart below of the iShares Emerging Markets Dividend ETF (DVYE) is indicative of the lag that dividend stocks have relative to growth stocks. This has also been true in the U.S. market for 2020 where growth stocks have far outperformed almost all sub-sectors of dividend-paying stocks. DVYE’s chart mirrors that of almost all the emerging market dividend ETF and mutual fund charts.

Let’s just say the party just might be getting started for what has been a sector sorely lagging the torrid bond rally in sovereigns and investment-grade credits. 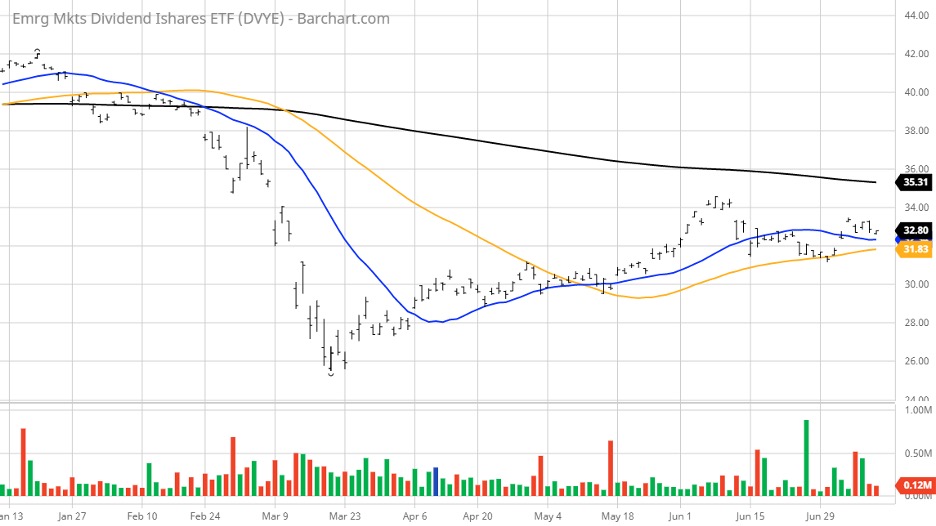 I personally have no positions in any of these ETFs, at least not yet. I’d like to see if the jawboning rhetoric coming out of China’s central bank, People’s Bank of China (PBOC), will be backed up by hard data due out later this week. If so, then these and other emerging-market-dividend ETFs and mutual funds, of which there are a few dozen, might be a great trade for income investors looking to buy into a market trading at a steep discount.

Look at the Charts

Until the Big Cannabis cultivators start showing Wall Street solid operating numbers, they’ll remain the territory of short-sellers and swing traders. At the moment, the swing favors the bulls. Canopy Growth Corp. (NYSE:CGC) is up a healthy 5.8% this week. More importantly, it has tested and proved that it can hold 50-day support above $16.70. That’s now the floor that cannabis bears need to respect. They tried to push CGC below that line this week and failed. If CG