Divided We Stand to Profit 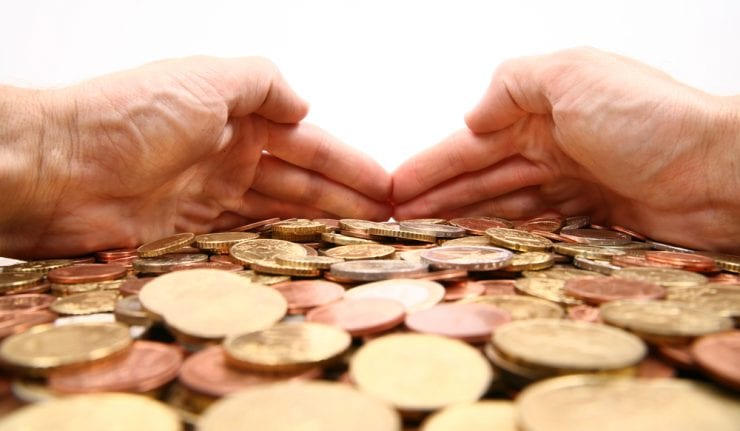 Yes, I’ve been up all night watching and analyzing the election results, but I’m not the least bit tired. The reason why is because when it comes to seminal events that matter in life, I’m all about being 100% present.

Another way to describe how I feel is what Jesse Ventura’s character said in the sci-fi classic Predator. After being shot in the arm and still fighting, a fellow soldier says, “You’re hit, you’re bleeding, man.” To which Ventura replies, “I ain’t got time to bleed.” So, in that warrior spirit, I say — I ain’t got time to be tired.

Oh, and you know what else ain’t got time to be tired? The stock market.

After the first three hours of post-election Wednesday trading, stocks were up huge. The Dow was up some 2.70%, while the S&P 500 jumped 3.19%. The real spike was in the tech-heavy NASDAQ Composite, which was up 4.27%. Now, that’s what I call a post-election surge! That surge was even more prominent in the NASDAQ 100, or QQQ, which was up more than 5% in early trading on Wednesday. 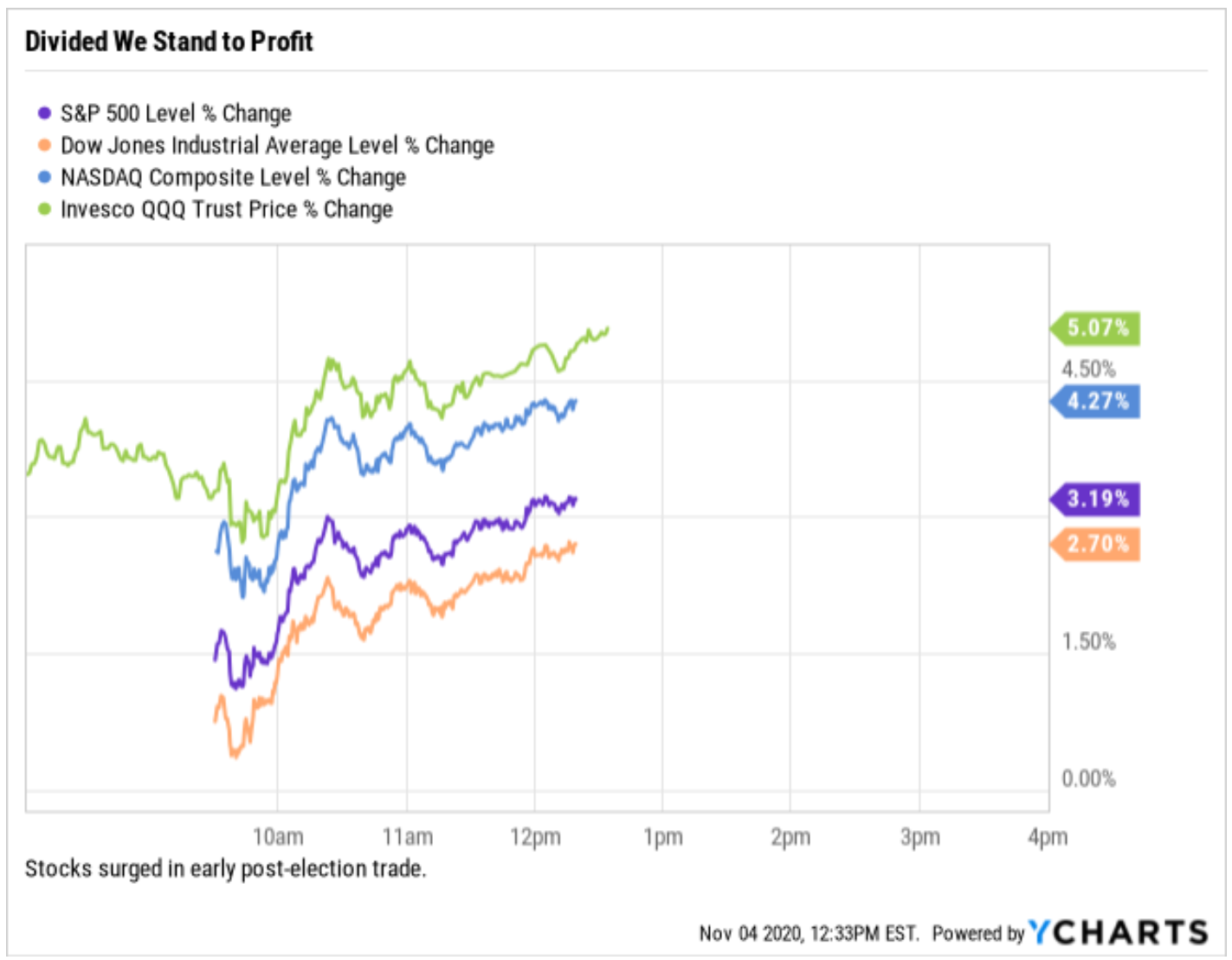 The reason for the big surge in the QQQ is because of the big price gains in super-cap technology stocks. I have been bullish in those stocks for a long time, and I am still very bullish on them.

So, the question I’ve been answering all throughout the morning to my friends, subscribers and colleagues is: Why are stocks, and especially tech stocks, up so much when we don’t know yet who will be the next president of the United States?

The answer to that lies in a little twisting of the phrase, “United we stand, divided we fall.” Because when it comes to the markets, it is more a case of, “Divided we stand to profit.”

I say that, because “divided” here does not refer to a divided society. Yes, we definitely have that, and evidence of that is clear in this “too close to call” election. Yet what we also have evidence of this morning is that as it stands right now, we will almost certainly have a Republican Senate and a Democrat House of Representatives.

Also, as it stands right now, the trend in the key remaining undecided swing states (Michigan, Pennsylvania and Wisconsin) is in favor of a Joe Biden victory.

We should know the results relatively soon, as many of these states will complete their vote counts sometime today or tomorrow. And if Biden wins, then we will have a divided government with one party in control of the White House and a split Congress.

Now, historically speaking, that is a win for stocks.

According to data from CFRA Research, the best market performance takes place when there is a Democrat president and a split Congress, with Republicans controlling one chamber. That performance, incidentally, was an average calendar year total return of 16% on the S&P 500.

I don’t know about you, but I would be pretty happy with an S&P 500 averaging 16% annual gains over the next four years.

Of course, we don’t know the exact outcome of the election just yet, and because this is 2020, any crazy development seems to not only be possible, but very likely. Still, if we do end up with a divided government, history tells us that it will be good for our portfolios.

Oh, and as for super-cap tech stocks, one big reason why they are surging is because with a split Congress, there will almost certainly not be a big tax increase on capital gains of the sort Biden wants. The threat of a big rise in capital gains taxes was holding back the buying in the already bid-up tech leaders, because if there would have been a capital gains hike in 2021, investors would have sold before the year was out to protect profits from the pilfering palms of politicians.

So, if you have gains in big tech, like we do in my newsletter advisory services, we won’t be forced to sell to avoid Uncle Sam’s (or Uncle Joe’s and Auntie Kamala’s) greedy pockets.

Finally, I want to close today’s issue with a beautiful observation written by my good friend and “brother from another mother,” Rich Checkan of the highly recommended precious metals firm Asset Strategies International:

No matter the final outcome, I am proud to live in a country where change can happen, or things can remain the same, as a result of a peaceful (for the most part) process, where the will of citizens is measured and accepted.

Whether it be in a few days or a few weeks, we will have our answer, and we will move forward together as a nation. And, if we don’t like the outcome, we have a voice we can raise four years from now.

I heard a quote the other day, and I can’t remember where, but I’m going to share it anyway…

Live well. Treat your friends and your enemies with respect. Make a difference through your shining example to those you hold most dear.

Hey, I couldn’t have said it any better myself.

P.S. The presidential election is over, but the results are very much in question. That’s why it is critical that you attend our Post-Election Summit, which is just two days away!

This private, in-person, “off the record” financial summit sponsored by the Investment Club of America. This confidential meeting will take place on Friday, Nov. 6 and Saturday, Nov. 7, in an undisclosed location in Las Vegas.

If Biden/Harris do in fact win the White House, and if the Republicans retain control of the Senate, what will the best investments be for the years ahead? More importantly, what will be the sectors to avoid so that you don’t get caught investing in the least-likely winners?

To help make sense of it all, we have brought together some of the world’s top experts to discuss the outcome of the November elections, including Mark Skousen, Hilary Kramer, Bryan Perry and yours truly, to name just a few.

Exclusive  The Impact of Rising Interest Rates on REITs

Combat is a serious business.

If you ever have to confront an assailant in a life or death physical struggle, what do you need to know to survive?

In the new episode of the Way of the Renaissance Man podcast, I speak with expert combatives instructor Troy Coe, founder of Reality Defense Training, an Arizona-based self-defense academy that emphasizes what’s called a survival-based approach to martial arts. 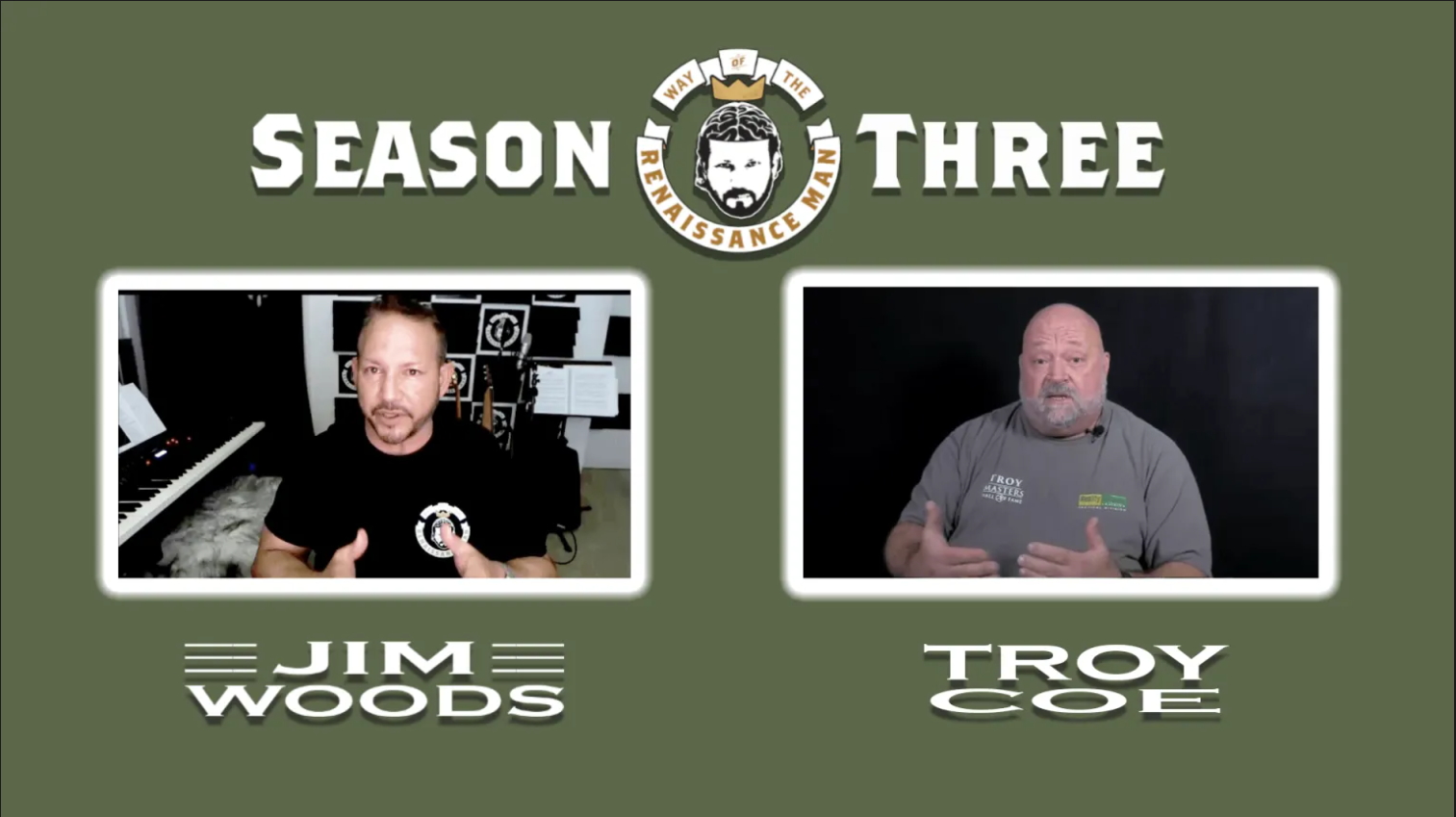 In this fascinating discussion, we talk about the nature of combat, why scenario-based combat training is a must to prepare you for a real-world confrontation and why you need to experience an “adrenaline dump” to learn how to manage the physiological stresses that occur during combat situations.

If you value your life and the lives of those you love, it is incumbent upon you to learn how to protect and defend life. Troy Coe is a man who can help you do just that, and you’ll discover the myriad ways how in this deep dive into the martial mindset.

On Differences of Belief

“Toward no crimes have men shown themselves so cold-bloodedly cruel as in punishing differences of belief.”

As the poet poignantly puts it, humans are at our worst when we confront opposing beliefs. And while strong beliefs are always worth fighting for, in civil society that fighting must be done in the intellectual and political sphere, and not the physical sphere. Yes, sometimes we have to fight bad ideas with physical force (e.g. Nazi Germany, Soviet expansionism, radical Islamic jihadists).

But save for those ideas that mobilize force against us, disputes over beliefs about tax policy, policing, education, health care, etc., need to be fought out in the only arena that rational men should fight in — the arena of conversation and debate.

share on:
Exclusive  Update on Recession Fears: Surprise on the Upside!