The seven e-commerce stocks to buy appear posed to ascend after most of them pulled back recently as cyclical and so-called economic recovery stocks gained interest from investors who increasingly looked for value. Despite the recent volatility in e-commerce equities, investors still seem to like the long-term potential of such stocks that soon may show they are ripe for a rebound after their recent retreat.

BoA Global Research recently wrote a report favoring recovery stocks in the second quarter of 2021 due to the “strong” ongoing COVID-19 vaccine rollout. In contrast, “stay-at-home” stocks that markets have bid up during the past year face “tougher” comparisons from the previous year than the recovery stocks.

Shopify Is Among the 7 E-Commerce Stocks to Buy

FactSet surveyed analysts who cover Shopify and found an even split of 45%-to-45% who rate the stock Buy or Hold, while the remaining 10% consider it a “Sell.” In February, the company reported its fourth-quarter results that spurred an increase in analysts’ consensus price target by 19.7% to $1,474.63, roughly 26.9% away from its close of $1,162.00 on March 23.

“If you’re buying something big online and don’t want to pay the full price up front, AFRM makes it happen,” Kramer said.

Affirm Holdings announced a partial early lock-up release that took effect on Feb. 26 for certain directors, officers and shareholders that reduced their restriction period before they could sell 10% of their AFRM shares, once certain stock price and other conditions are met. As a result, Affirm Holdings indicated that up to 15.6 million shares will became eligible for sale at the open of trading on March 3. The stock dropped dramatically in early March as the eligibility to sell the shares commenced. 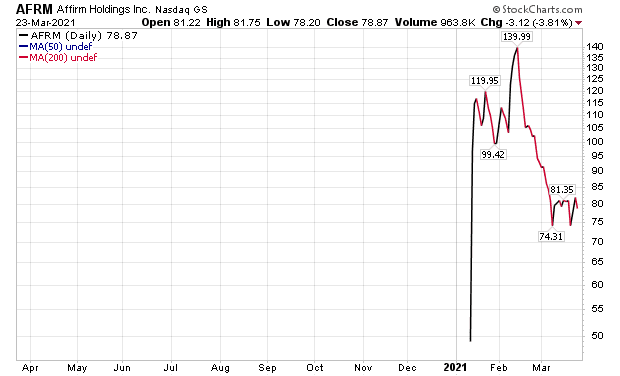 “The pandemic pushed a lot of boutiques into virtual operations and now there’s no real incentive for them to reopen the storefront,” Kramer said. “That’s been a boon for the retail platforms that support small stores’ online presence: Etsy Inc. (NASDAQ:ETSY), PayPal Holdings Inc. (NASDAQ:PYPL), Shopify Inc. and soon Stripe will join them.”

Kramer expressed excitement about a possible initial public offering for Stripe. Whichever names one likes, online shopping is not going away just because malls are open again, she added.

“A year of retail habits is hard to break,” Kramer continued. 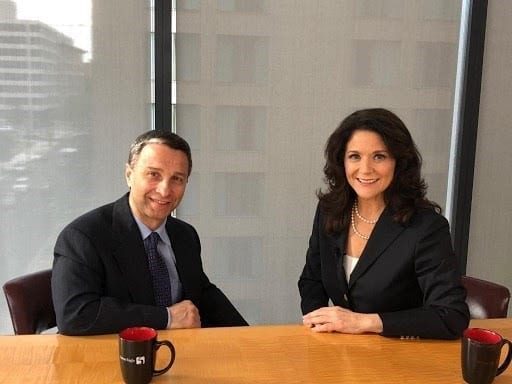 “If you are looking to add to your holdings, the pullback in Walmart (NYSE:WMT) represents a great opportunity to do so at a discount,” said Jim Woods, editor of Successful Investing, Intelligence Report and Bullseye Stock Trader, as well as co-editor of Fast Money Alert.

Like Lowe’s Companies, Inc. (LOW), Walmart is likely to be the recipient of significantly increased consumer spending due to the big stimulus checks sent to individuals through the $1.9 trillion coronavirus relief package approved by Congress. Now that the latest federal stimulus bill has been passed, Woods said he expects both Walmart and Lowe’s to attract part of that money flow. 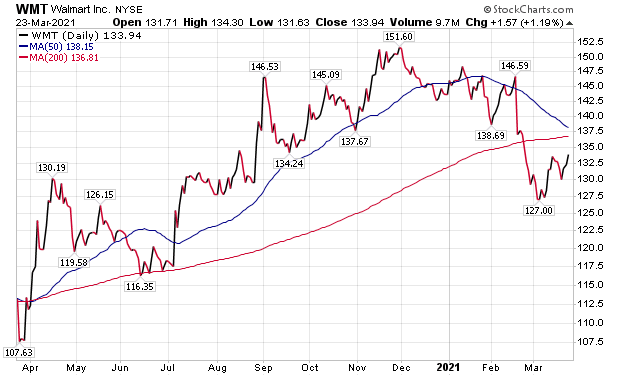 Walmart Is Among 7 E-Commerce Stocks to Buy

BoA is another fan of Walmart, which the investment firm praised in a recent research that noted the retailer’s “multiple drivers” of potential comparable upside during the current fiscal year from the previous one.

“We believe visibility will continue to rise on diversifying revenue streams, including digital advertising,” according to the investment firm.

Walmart achieved strong growth in its e-commerce sales and revenue during fiscal year 2020. In the last several years, Walmart has been investing in e-commerce heavily.

During fiscal 2020, Walmart notched sharp growth in its e-commerce sales and revenue. The retailer also has been growing through acquisitions to enhance its online sales.

Despite becoming a retail giant through large brick-and-mortar stores, Walmart’s management has pursued digital shopping growth, as have many of its rivals in the United States and other parts of the world. Walmart’s e-commerce sales in fiscal year 2020 climbed 43.0% to $35.9 billion compared to $25.1 billion in fiscal 2019. The contributions of e-commerce are especially meaningful when compared to overall net revenue gains of 1.87% in fiscal year 2020 to $524 billion, up from $514.4 billion in fiscal 2019.

Source: Stock Rover. Click here to sign up for a free two-week trial for Stock Rover charts and analytics.

The up-and-down trading in Latin American e-commerce giant MercadoLibre (NASDAQ:MELI) involved it hitting a stop price in late February that Woods had set after recommending the position and achieving a gain of 32.17% for his subscribers from when he first recommended it. Yet because the stock is one in which tactical opportunities exist, Woods recommended the position again on March 5. Shares are up since then. Despite a nice gain, there is still plenty of upside left, he opined.

“If you have yet to re-allocate to MELI, I recommend you do so now and take advantage of the March volatility,” Woods said. 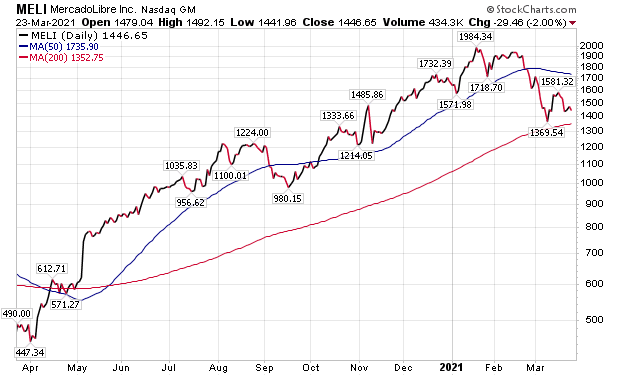 FactSet reports that MercadoLibre, of Buenos Aires, Argentina, has received 26 ratings with 62% giving Buy ratings, 35% ranking the stock a hold and the rest calling it a sell. The average price target for MercadoLibre has climbed 2.1% to $1,933.91, indicating 25.19% upside from the stock’s closing price on Tuesday, March 23.

MercadoLibre’s fourth-quarter revenue of $1.33 billion beat consensus estimates by $120 million but Generally Accepted Accounting Principles (GAAP) earnings per share came in at negative $1.02. The company’s gross margin of 36.8% and operating margin of 1.9% slipped beneath consensus estimates. 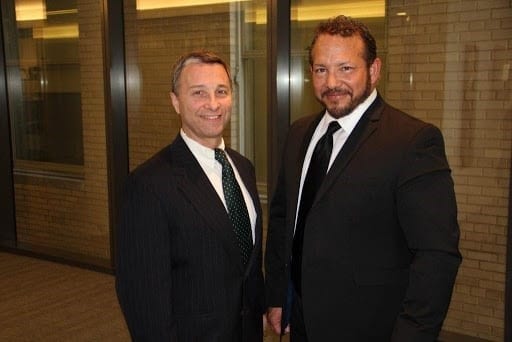 Certain analysts who follow MercadoLibre view the company as a winner of a shift occurring in Latin America towards increased e-commerce and financial technology adoption. MercadoLibre also operates a growing credit business. Analysts cite the company’s investments in these and other initiatives hurting its near-term profitability, but some of them only expect its margins to be pressured in the short term.

Another e-commerce stock that Woods likes is Wayfair Inc. (NYSE:W). That e-commerce company provides approximately 22 million products for the home sector under various brands, nearly all of the items are at a big discount to retail prices, and everything usually comes with free shipping, he added.

Aside from liking the stock’s prospects, Woods said he appreciates its cool jingle, “Wayfair, you’ve got just what I need.”

“Wayfair is more than just a cool jingle,” Woods wrote to his Fast Money Alert subscribers on March 23. “It’s a cool earnings powerhouse. Last quarter, earnings per share (EPS) grew by 144% year over year, and in the coming quarter the company is projected to grow by another 109%.”

One advantage that China’s e-commerce juggernaut JD.com possesses is that it lately has outperformed its rival Alibaba during the pandemic. JD.com excels, in large part, by owning its own logistics network, warehouses and distribution.

Those capabilities have helped JD.com not only stay in business but grow. Some customers have shifted to JD.com and they are paying a small premium for white-glove service that the company offers to deliver food and other items during the pandemic. 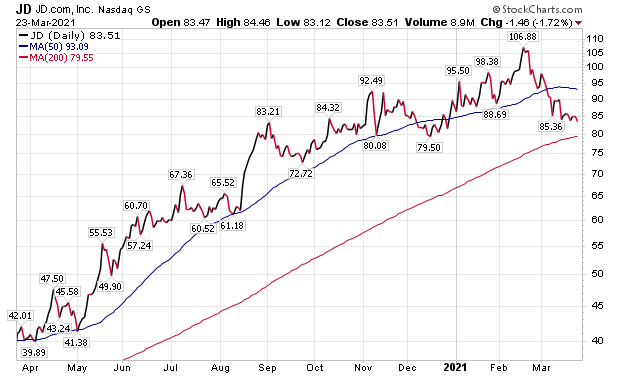 Booking Holdings (NASDAQ:BKNG), formerly Priceline, is BoA’s top European reopening stock. However, the stock fell both March 22 and 23 after Germany’s Chancellor Angela Merkel ordered a new shutdown as a third wave of COVID-19 cases broke out in the country. 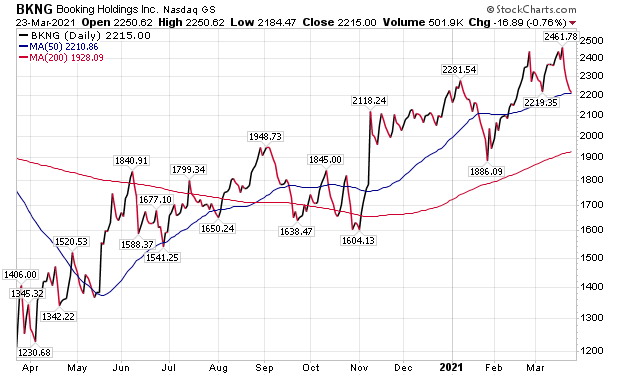 In the internet sector, recovery stocks seem best positioned to outperform others in second-quarter 2020, according to BoA. These stocks include companies that were most depressed in 2020, including online travel company Booking. BoA recently upgraded the stock from “Neutral” to “Buy” with a price target boosted 15.7% from $2,550 to$2,950.

A leader in the European travel market, the company has an opportunity to leverage its Booking.com brand and business model to gain traction in North America, Asia and Latin American, BoA wrote in a research note.

“It is pursuing a large opportunity in alternative accommodations,” according to BoA. “It is a top beneficiary of vast vaccine supply increase in Europe by 3Q.”

Selected REITs Offer an Additional Way to Profit from the Recovery

“Don’t forget about real estate investment trusts (REITs), especially the retail and office properties that suffered during the pandemic,” said Bob Carlson, editor of the Retirement Watch investment newsletter and chairman of the Board of Trustees of Virginia’s Fairfax County Employees’ Retirement System with more than $4 billion in assets.

They are benefiting as stimulus checks reach households and the economy opens up as more people are vaccinated, Carlson continued. Also, apartments should do well as employment increases and people move out of the group and family housing arrangements they entered early in the pandemic. 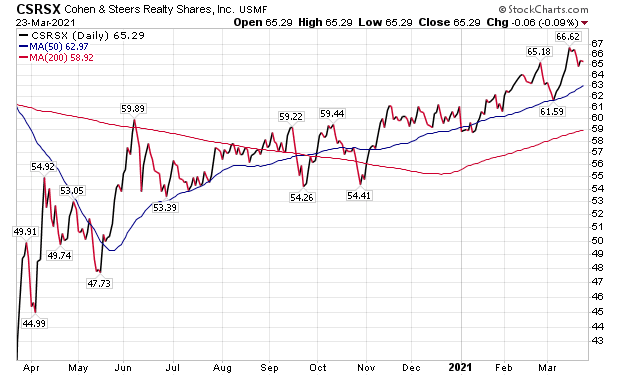 COVID-19 Does Not Derail 7 E-Commerce Stocks to Buy

COVID-19 vaccinations are offering hope that new cases and deaths due to the virus will slow. The Food and Drug Administration (FDA) recently approved a third COVID-19 vaccine to allow additional people to be vaccinated.

The seven e-commerce stocks to buy gives investors an array of choices to profit from online sales amid the $1.9 trillion federal stimulus package, increased COVID-19 vaccine availability and the economic reopening. A recent pullback of most of their prices offers interested investors an improved entry price than they could have obtained just a few weeks ago. 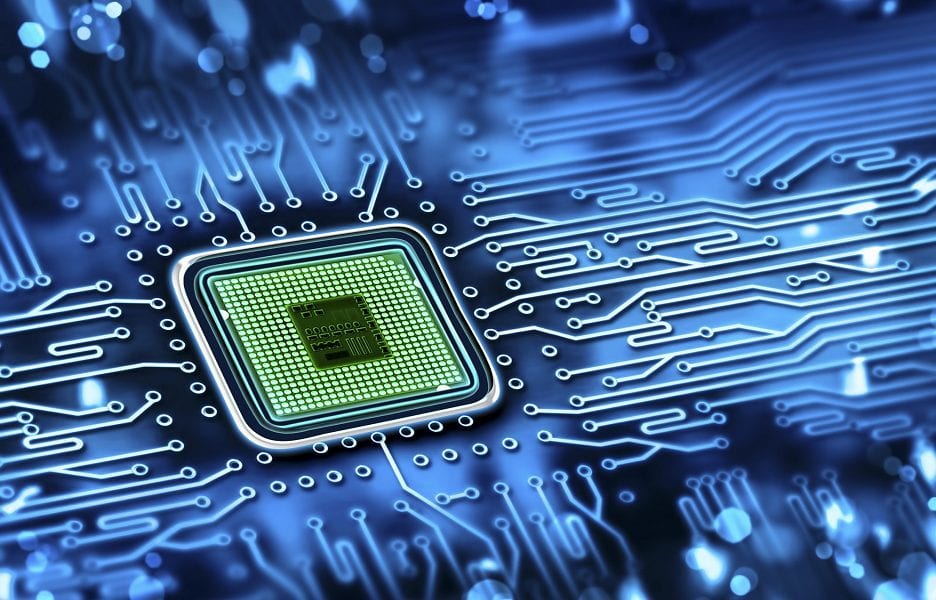 The current correction in the Nasdaq is sizing up to be a textbook consolidation, following a torrid 2020 rally for the tech-heavy Invesco QQQ Trust (QQQ) that traded at a lofty premium to its long-term moving averages. Reopening euphoria combined with rotation into financials, industrials, materials, energy, transportation and leisure stocks sucked the short-term air out of the tech sector in a classic, mean-reversion-trade scenario. The bond market also has been a source of funds for the va