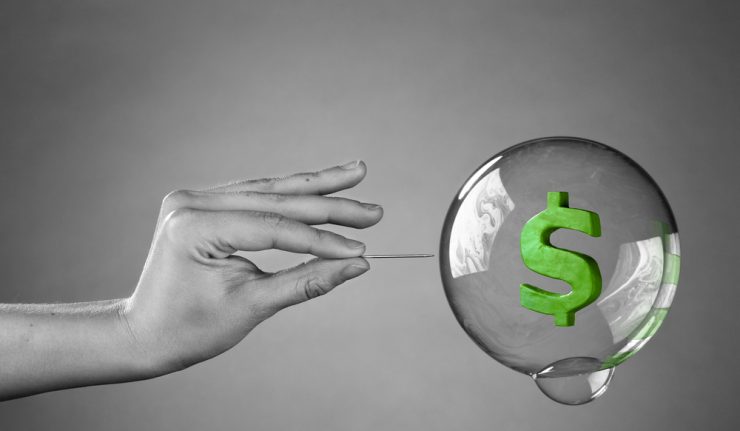 Life on Wall Street is a constant struggle between logic and sentiment. Right now, no matter how you weigh these forces, the result is unlikely to give the bulls much in the way of instant gratification.

After all, earnings season is winding down now. On the whole, the numbers are objectively good. They’re even better than we expected.

But response to those numbers tells me that Wall Street isn’t really looking at the fundamentals in anything like an objective way. Sentiment is in control.

And that sentiment is too brittle to give the market a lot more room to rally. When the mood cracks, stocks look more likely to sink 3-5% before they find a clear route to climb that much farther into record territory.

That risk-return proposition tells me there’s no real reason to buy the market here. If you’re holding onto substantial profits, it might even be time to lock in those gains.

We Didn’t Sell in May

I was adamant earlier this year that “sell in May” was going to be expensive advice to follow. Sure enough, the S&P 500 has held up impressively so far this summer, climbing close to 5% in nine weeks.

Under ordinary market conditions, that counts as a surge. Remember, while the S&P 500 twists and turns from season to season, it generally needs about a year to give investors a 10-11% return.

Racking up half that score in a fraction of the time should have Wall Street feeling really good. Instead, the mood remains somewhere between tentative and sour.

Just about every major earnings report this season has been greeted with selling. Microsoft Corp. (NASDAQ:MSFT) initially gained ground after releasing its numbers, but has now joined Apple Inc. (NASDAQ:AAPL), Amazon.com Inc. (NASDAQ:AMZN), Facebook Inc. (NASDAQ:FB) and others on the downside.

That tells me people have simply made up their minds to sell and they’re looking for the smallest excuse to do it. We’re not going to argue with them.

How does the old market saying go? “Markets can remain irrational longer than you can remain solvent,” said famed economist John Maynard Keynes.

As I write this, the market is fighting disappointment and a kind of resignation that stocks need to go down before they can keep climbing. These are irrational impulses. There’s no real point in arguing with them on rational terms.

We can’t fight the mood. But we can make sure we’re solvent when the mood swings back in our favor.

No Urgency to Buy the Market

Of course, as I’ve said, we don’t buy or sell “the market.” I prefer to pick individual stocks that have what it takes to rally no matter what the S&P 500 is doing in any given period.

That approach has been the key to our outperformance in recent months, as well as the long term. When others on Wall Street said it was time to sell out ahead of the summer, we held onto our positions and even opened fresh ones.

It paid off. Since June 1, we’ve scored over 9% on our exits, booking win after win across all my portfolios. And on average, we did it in a fraction of the time.

I figure the S&P 500 has needed 60 days to climb 4.7% for a respectable 28% annualized rate of return. If the bulls can’t cheer that velocity, they’re clearly overdue a nap.

But on average, my exits have paid off double that profit in 45 days. Our rate of return is running about triple the market as a whole.

Eyes on the Long Cycle

Granted, every trade is different. Some of these exits have been maturing for months in order to squeeze the last percentage points out of the position. Others, especially on the options side, have given us big gratification in a matter of minutes. Every portfolio has a unique rhythm and develops at its own pace.

That’s why I won’t really be selling everything once August takes us into the true dog days of summer. But if I only owned the S&P 500 and was looking for instant gratification, I’d be nervous.

This earnings season has been a bust in terms of sentiment. In three months, the market might be ready to appreciate the numbers as pointing the way toward a bullish future.

After all, stocks generally point up over time. The only question is whether you can remain patient long enough to reap that reward.

I don’t think the market is in a patient mood, which makes this a great time to get started on any of my portfolios. We’ve been itching to buy more GameChangers, for example, but growth stocks have been overpriced.

I’d welcome the chance to accumulate great stocks on the dip. We have cash on hand to make it happen when the opportunities emerge.

That cash keeps rolling in from my options services. From 2-Day Trader to High Octane, we’re making money when stocks go up and when they go down.

When the market searches for direction, that’s the place to be. And that’s how we keep our capital working until Wall Street is ready to rally.