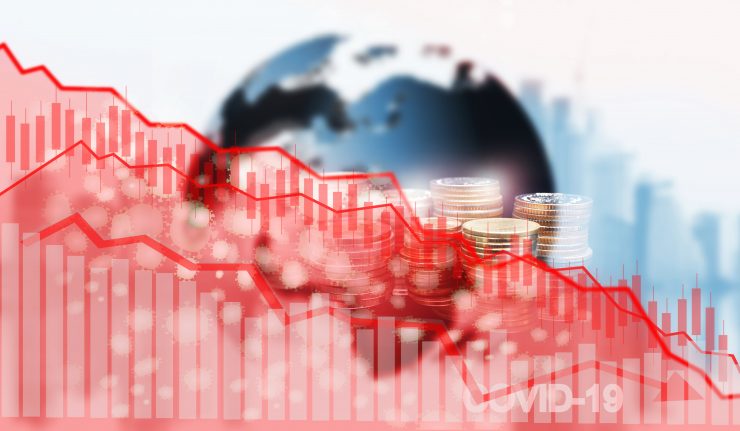 “As all history informs us, there has been in every state and kingdom a constant warfare between the governing and the governed; the one striving to obtain more for its support, and the other to pay less.” — Benjamin Franklin (1787)

How many of you have kept in touch with your favorite teachers from high school or college?

In the early 1970s, I earned my bachelor’s and master’s degrees in economics from Brigham Young University (BYU). My two favorite professors were Larry Wimmer and Merrill Bateman.

Last week, I was in Utah and had lunch with them. For two men in their eighties, they looked surprisingly fit. Afterward, we took a picture together holding a copy of the new book, “Samuelson – Friedman: The Battle over the Free Market.” 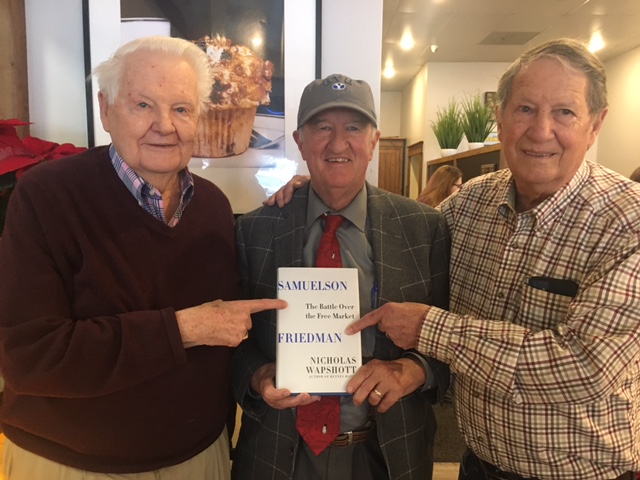 In the photo, Larry Wimmer is pointing to the free-market economist Milton Friedman (1912-2006) because he graduated from the University of Chicago. Milton Friedman was on his dissertation committee. Wimmer is an economic historian who worked with another Nobel-Prize-winning economist, Robert Fogel, on his book “Time on the Cross.”

When Larry came to BYU, we were using Paul Samuelson’s famous textbook, and Wimmer brought a refreshing alternative to the Keynesianism being taught at BYU. Like me, he is a long-time member of the Mont Pelerin Society.

Merrill Bateman is pointing to Paul Samuelson (1915-2009) because he graduated from the Massachusetts Institute of Technology (MIT) and took classes from Samuelson. He was an expert on Ghana and the cocoa industry, Colombia and the coffee industry and was a major consultant to Mars Candy. Bateman went on to become the president of BYU in the 1990s and now is a successful money manager.

During the luncheon, they both took a class in microeconomics — Wimmer from Friedman, and Bateman from Samuelson — not macroeconomics, the area they are famous for.

Since graduating from BYU, I went on to earn my Ph.D. in monetary economics from George Washington University and came into contact with both Nobel Prize laureates, Friedman and Samuelson.

The Match of the Century: Samuelson vs. Friedman

I have followed their 50-year battle over the free market and big government, with Samuelson supporting more government through deficit spending, progressive taxation and the welfare state, and Friedman favoring less government by advocating monetary restraint, deregulation and lower taxes.

In 1997, I read all of the many editions of Samuelson’s textbook and wrote an article for the Journal of Economic Perspectives on “The Perseverance of Paul Samuelson’s Economics.” It is frequently cited among economists.

Then, two years later, in 1999, I wrote a fun article for Liberty magazine called “Game, Set, Match,” about a fictional game of tennis between Friedman and Samuelson. Both were avid tennis players. In the round of tennis, I have Samuelson leading at first, but Friedman makes a big comeback. Who wins? Click here to read the account. 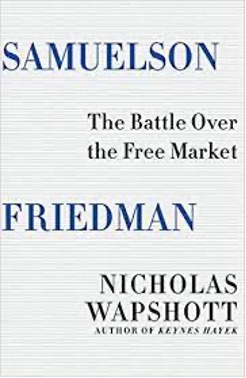 Wapshott is a compelling storyteller. I listened to the entire audiobook and learned a lot of new things about each economist.

In reading the book, it is clear that Wapshott favors Samuelson and his “neo-classical synthesis,” which he says saved the world during the crises of 2008 and 2020. He even suggests that Friedman’s laissez-faire philosophy gave indirect support for the Jan. 6 protest/violence on Capitol Hill. Talk about a low blow.

He’s less harsh about Samuelson’s sins in his never-ending attack on the virtues of saving, balanced budgets and laissez-faire in his “Economics” textbook. He castigates Samuelson for his excessive optimism about Soviet central planning but leaves out his most embarrassing statement, which was made in the 1989 edition, the year the Berlin Wall came down: “The Soviet economy is proof that, contrary to what many skeptics had earlier believed, a socialist command economy can function and even thrive.”

In 2001, I highlighted Samuelson and Friedman in two consecutive chapters of “The Making of Modern Economics,” my award-winning history of the great economic thinkers. The 4th edition will be released by Routledge Publishers in January. Stay tuned.

Naturally, my bias is in favor of Friedman over Samuelson. Friedman is cited more often in academic papers and is way ahead of Samuelson in Google searches among all economists — Friedman is #21 and Samuelson is #68. Among the “Big Three in Economics,” Marx is #3, Adam Smith #7 and John Maynard Keynes #9.

One advantage Friedman has over Samuelson is his approach toward economic analysis. Samuelson’s academic papers are all theory and mathematical, while Friedman’s are more empirical, which the economics profession prefers these days.

Friedman has two bestsellers that can be found in most bookstores: “Capitalism and Freedom,” published in 1962 and “Free To Choose,” published in 1980. Samuelson’s books are nowhere to be found — even his “Economics” textbook has not released a new edition since 2009.

Friedman’s followers have programs honoring his birthday on July 31. Do Samuelson’s supporters do the same on May 15?

But Now Samuelson is Winning

Both my BYU professors felt that Friedman is more quotable than Samuelson, and better known today, but they agreed that Samuelson’s neo-classical Keynesian model has carried the day, particularly during crises. This graph says it all — big government has won! 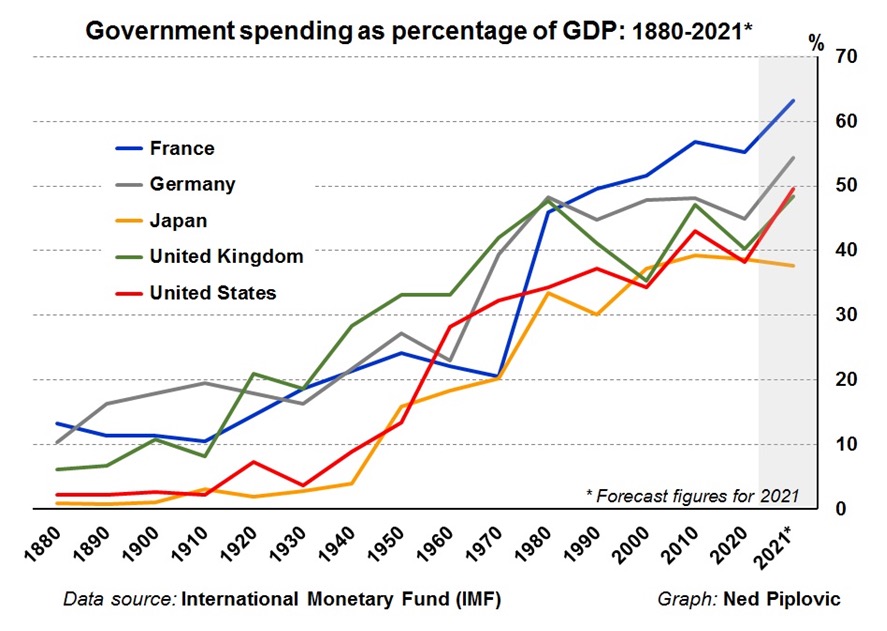 I’m still wondering when the law of diminishing returns will set in when it comes to big government and the welfare state.

How to Get Rid of a Bad Textbook? With a Better one!

“I don’t care who writes a nation’s laws or crafts its advanced treaties if I can write its economics textbooks.” — Paul Samuelson

But I haven’t given up on fighting big government and Keynesian economics, and neither should you. Around the time Samuelson’s textbook went out of print, I decided to write a “no compromise” textbook on free-market economics to counter the Keynesian model.

How do you counter a bad idea? With a better idea! 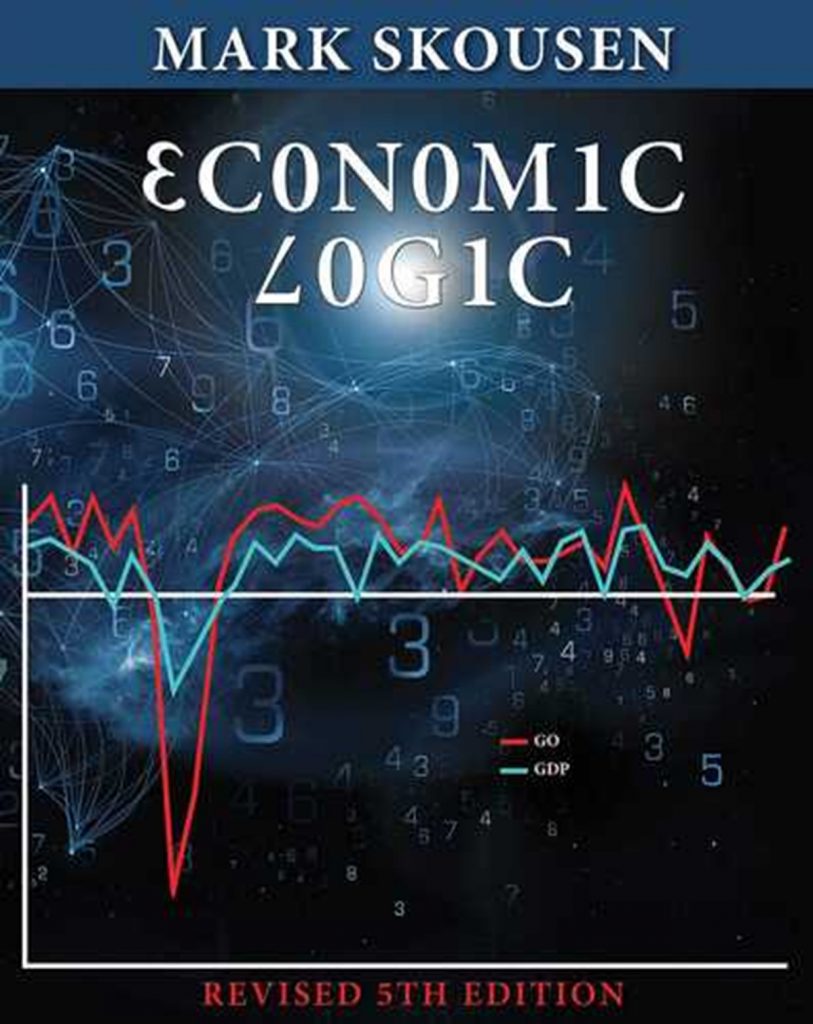 My “Economic Logic” textbook teaches students and adults about free-market capitalism in 28 easy lessons. It’s now in its 5th edition.

I’ve met numerous subscribers and students who have read my book. They love it. For example, At the Las Vegas MoneyShow last summer, one of the attendees, Kai Ahlburg, came up and said my book “Economic Logic” had converted him to free-market capitalism, and he wished he had had that textbook when he went to college. “It changed my life,” he said.

My book has a whole chapter (#22) on Keynesian economics and its impact on society. If you want to know what’s in the rest of the book, click here.

“His textbook, ‘Economic Logic’, now in its 5th edition, demonstrates his ability to look at the whole economy, that is, the real world and real people. The rigidity between micro and macroeconomics is not for him. He realizes instead that they’re all connected together. He begins this book with a profit-loss income statement to demonstrate the dynamics of the real-world economy. No other textbook does this.

Most economics textbooks cost over $100 each. My textbook, “Economic Logic,” retails for $49 but you pay only $35 by ordering it from www.skousenbooks.com. I autograph each copy and mail it for free if you live in the United States.

Order it today in time for Christmas!

Do Plastic Bans Do More Harm Than Good?

“Plastic pollution causes harm to humans, animals and plants through toxic pollutants. It can take hundreds or even thousands of years for plastic to break down, so the environmental damage is long-lasting. It affects all organisms in the food chain from tiny species like plankton through to whales.” — Earth Day advocate

We’ve all been told that plastic bags, bottles and straws are bad and need to be replaced with paper products.

Many activists have joined groups to eliminate polystyrene packaging, as it is believed to be environmentally damaging.

More than one hundred U.S. cities and counties in 11 states have adopted local ordinances that restrict or ban the use of plastic foam containers, utensils and packaging materials.

Some large retailers — Dunkin’ Donuts, Target, McDonald’s, Crate and Barrel and others — have already announced or implemented phaseouts of polystyrene packaging. Starbucks recently announced a $10 million grant to encourage the development of a coffee cup with a less degrading environmental impact.

But have government leaders and advocates considered the hidden costs of plastic bans?

A recent study by the Independent Institute concluded, “New York City’s ban on food-service foam products could eliminate 2,000 jobs and $400 million in economic activity. In California, an estimated 8,000 jobs would disappear. Small businesses operating on thin margins are particularly harmed by plastic bans.”

More importantly, what about the cost of producing paper products, the alternative to plastic?

Based on 400 scientific articles on plastics, Dr. DeArmitt demonstrates that:

According to these studies, plastic is actually greener than paper, cotton, metal or glass. Pollution is a problem, but it’s vital that we do a cost-benefit analysis when it comes to all the alternatives.

previous article
Sadness Amidst the Benevolent Universe
next article
Defining the REAL Cost and the REAL Deal in Purchasing Property: A Comparison Between North America and Latin America