There is no denying the desire among investors to reduce portfolio weightings in technology stocks.

The tug-o-war between growth and value has had most tech stocks on the ropes for the better part of a month, with the most recent two weeks putting material downward pressure on the tech torch bearers. They include FAANG stocks — Facebook (NASDAQ:FB), Amazon (NASDAQ:AMZN), Apple (NASDAQ:AAPL), Netflix (NASDAQ:NFLX) and Alphabet’s Google (NASDAQ:GOOG) — and the cloud kings.

It is not that there is a meaningful slowing of sales and earnings on the horizon, but rather, just some textbook multiple contraction at work. For the high-price-to-sales stocks that have shed up to 60% of their market values, the tide will likely continue to go out until interest rates plateau.

Bargain hunting in this blown-up space still looks premature, but might be good for an oversold trade during earnings season for those that are very short-term-oriented. But there has been a lot of pain and an absence of insider buying to trigger some confidence that the worst is over.

Where there is evidence of resilience in the tech sector is in the semiconductor equipment and semiconductor manufacturers. As the NASDAQ Composite has corrected 8.1% and the NASDAQ 100 (QQQ) by 7.6%, the VanEck Semiconductor ETF (SMH) has given back only 3.7%, per last Friday’s close, year-to-date (YTD). The chart below also shows SMH maintaining its technical integrity with its 20-day (blue) still holding above its 50-day (yellow) moving average such that they are at an inflection point. 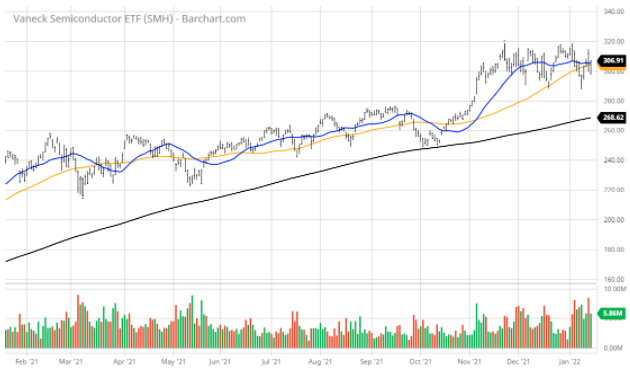 Friday’s bullish reversal, which saw SMH open down sharply and then close at the highs of the day on solid volume, was what I believe a buy signal for investors to lean into the sector with gusto. The green light for this call stands on the release of fourth quarter and future guidance by Taiwan Semiconductor Manufacturing Inc. (TSM) — the largest chip foundry in the world — last Thursday.

Wei cited the added production capacity was due to higher demand for high-compute electronics, such as smartphones, electric vehicles and servers. The biggest catalyst for the stock’s impressive move higher was that the company issued upside guidance for the current quarter, seeing Q1 revenues of $16.6-17.2 billion vs. $15.78 billion S&P Capital IQ Consensus.

This is worth getting excited about from both a fundamental and technical standpoint as the company is forecasting accelerating revenue and earnings growth for 2022 in addition to breaking out of a one-year basing formation. 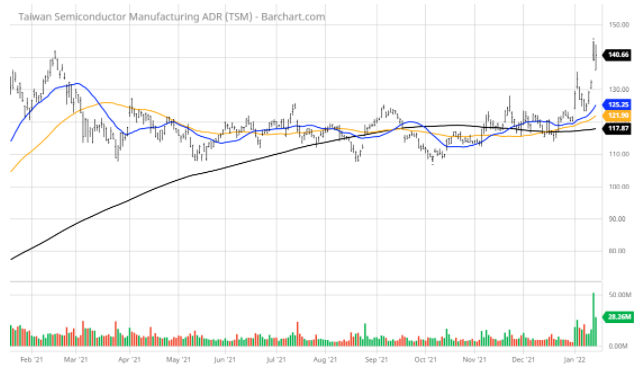 It is a great tell for the sector. Taiwan Semiconductor is not only a true bellwether for what lies ahead this year for business conditions, it is the #1 holding for SMH, accounting for 14.10% of total assets. Being a foundry that build chips for customers with proprietary technologies, other chip and chip equipment stocks may outperform TSM when it comes to sheer price appreciation.

The key point here is the magnitude of future demand being laid out by TSM and the bullish spillover to what that means to the rest of the leading chip and chip equipment companies that should report impressive fourth-quarter results while also raising guidance for current quarter and the year ahead. (I have no position in TSM at this time.)

Intel (NASDAQ: INTC) Chief Executive Pat Gelsinger told CNET that he thinks we’re almost through the worst of the chip shortage, which will last through the second half of 2021. He predicts it’ll gradually ease through 2022 and fade in 2023. 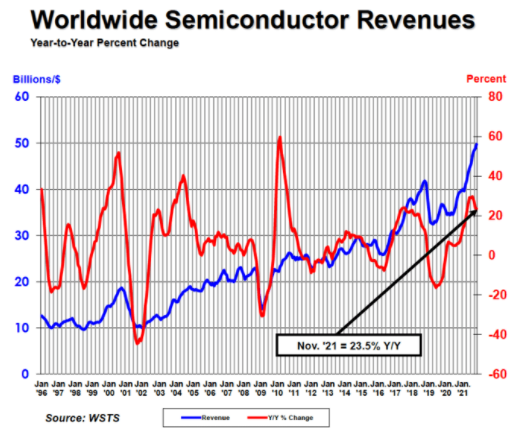 On Jan. 3, the Semiconductor Industry Association (SIA) reported global semiconductor industry sales were $49.7 billion in the month of November 2021, an increase of 23.5% over the November 2020 total of $40.2 billion and 1.5% more than the October 2021 total of $49.0 billion. The cumulative annual total of semiconductors sold through November 2021 reached 1.05 trillion, which is the industry’s highest-ever annual total at a time when massive bottlenecks for components and raw materials were overhanging and hampering the industry. One can only imagine the increased flow of finished goods once the supply chains begin to operate more normally. 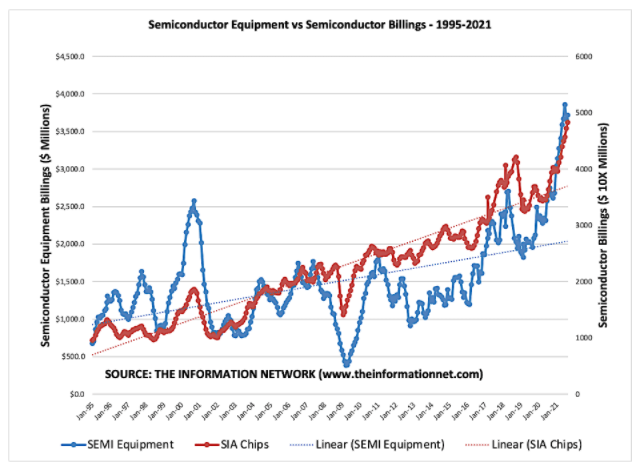 With so much emphasis being placed on rotation out of all things tech and into cyclical sectors, a great deal of common sense is getting lost in the panic selling of software stocks with high price-to-sales and lofty price-to-earnings (P/E) ratios. While there is no escaping multiple contraction in growth stocks when yields rise, most chip and chip equipment stocks trade with reasonable valuations and solid growth prospects targeting autos, industrial medical, power generation, automation and virtually everything with a power cord attached to it.

Income investors might want to consider owning SMH or a basket of some of its top holdings and selling out-of-the-money covered calls. In a volatile market such as the present, call option premiums expand, making for an excellent source of steady income.

For a market trying to regain its footing after recoiling on fears of hawkish Fed policy changes, some things will remain constant for the next six months; one of them is a strong appetite for chip production and chip supply by the global economy. That was made known last week by the world’s largest chip foundry, which validated the idea that the bullish chip cycle has another strong leg to it. And in this market, that totally works for me.

previous article
Is the Tide Turning in the Pandemic, Politics and Stocks?
next article
Top 4 Oil Stocks to Buy for Profiting from Exploration and Production Growth