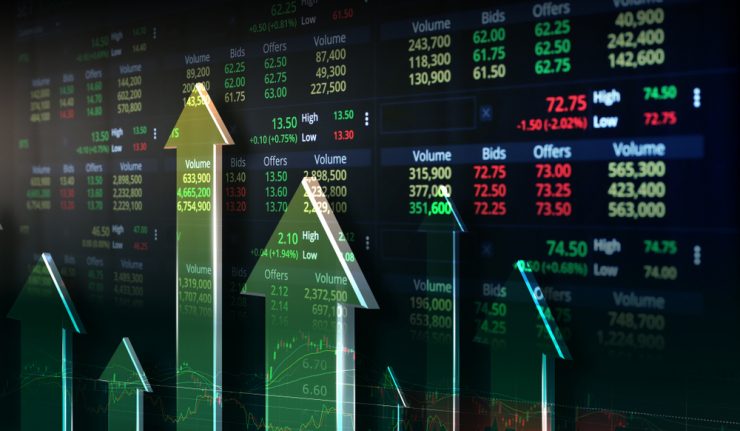 Friday’s hot nonfarm payrolls report of 467,000 jobs being added raised a lot of eyebrows, considering that White House Head Economic Advisor Brian Deese painted the tape with a public warning that some tough employment data was about to cross it.

This is especially true following the preceding ADP report on Tuesday, which showed that American companies unexpectedly cut 301,000 jobs in January in the private sector. This was the first job loss since December of 2020 and the biggest since April 2020, as the spread of the Omicron variant of the coronavirus hurt the job market.

Chalk it up to revisions or data shuffling, it matters little. The marketplace was expecting something completely different. It is very hard to know what the current jobs situation is because the numbers last week were so confusing. One report surprised on the downside and the other surprised on the upside.

What is known is the market took its cue from the surface data, did not wait for any further explanation and repriced its interest rate expectations. All of this gave a clear signal that the Federal Reserve is behind the curve and will have to act quickly — more quickly than they have otherwise telegraphed.

After Friday’s session, the consensus among Wall Street economists is now calling for up to five rate hikes this year, two more than just a week ago. Bank of America is forecasting seven rate hikes. There is a price to pay for calling rampant inflation “transitory,” and while the Fed has finally changed its language, it hasn’t done anything to combat it. In fact, it will be pumping $60 billion of stimulus money into the system this month and another $30 billion in March before it begins to cut the federal funds rate.

The Fed could have stepped on the stimulus gas pedal intra-meeting and halted quantitative easing (QE) altogether before the next set of inflation data is released on Feb. 10 (Consumer Price Index) and Feb. 15 (Producer Price Index). This would have sent, in my view, a strong message to the market that the Federal Reserve is more than a meeting-to-meeting body. The market wants a proactive Fed, not a reactive Fed, and now there is a growing perception the Fed, after delaying its response to inflation, then and now, is going to have to do more than just tap the brakes.

The notion of five to seven interest rate hikes seems very aggressive at this time, since there are improving signs in some industries regarding smoother supply chain operations. A string of this many Fed rate hikes would likely make for a stiff headwind until the cycle is complete, even though the federal funds rate would be no higher than 2.0%, if seven rate hikes were to take place. Prior to the pandemic, the federal funds rate was near 2.0%, and the market rally was very much intact. Again, this is the price to pay when the Fed politicizes its policy for sake of bad optics, renomination or just getting it wrong.

The market is now having to deal with fiscal policy uncertainty, and it is asking what are the associated costs that will be incurred as the Fed works to catch up. This situation calls into question a future economic slowdown if the Fed doesn’t thread the needle just right in order to orchestrate a soft landing. Under these circumstances, the economy can do a touch-and-go takeoff again with inflation under control. This is the most optimistic bullish case scenario one can paint. But it depends on the Fed doing better at delivering on its job performance.

Even with the January inflation numbers expected to be pretty elevated, we probably haven’t seen peak inflation yet when factoring all the increasing commodity prices, service prices and wage gains from the existing and the supposedly new jobs. Maybe the month of February will mark the top.

The way through this inflationary period is for the Fed to act accordingly going forward. It would have been unthinkable that, at the end of the 2008-2009 Great Recession, the Fed’s balance sheet would be at $3 trillion. It is even more unthinkable that, after the pandemic, the Fed’s balance sheet now stands at $9 trillion and is still growing with the cost of interest now bigger than the Department of Defense’s budget, to where the government is supporting the economy to the tune of 15% of gross domestic product (GDP).

The utopian solution is high, sustainable and inclusive economic growth, and that is where the challenge is right now. Ideally, the Fed wants to engineer growth at a steady and high rate, sustain our living standards and pay off its debt gradually.

That is the growth solution, but that implies a gradual approach to rate hikes, and the market is now betting otherwise. Austerity works for a while, but it is not a long-term solution. This is because people get increasingly tired of tightening their belts for a problem they didn’t create.

The most likely scenario that will unfold is more of the same — financial repression. Wikipedia defines it as “policies that result in savers earning returns below the rate of inflation” to allow banks to “provide cheap loans to companies and governments, reducing the burden of repayments.” It can be particularly effective at liquidating government debt that is denominated in domestic currency.

The Fed maintains interest rates at very low levels so that creditors end up subsidizing debtors. This overall policy action results in the government being able to borrow at extremely low interest rates, obtaining low-cost funding for government expenditures — like interest on the debt.

This was all working to their favor when inflation was tracking under 2%. At 7% and rising, Jerome Powell and his fellow central bankers should forget about summer vacations, roll up their sleeves and figure it out, because better late than never is not a solution.

P.S. On Feb. 16 at 2 p.m. EST, I am holding a subscribers-only teleconference called “How to Turn Volatility Into Big Trading Profits.” Click here to register for free!

previous article
Index Fund vs. Mutual Fund: What are their Differences?
next article
Five Clean Energy Investments to Buy for Climate and Inflation Protection