PowerTrend Brief: A Holiday Week Ahead, But Still Much to Digest

With the close of Friday’s trading, we ended the second quarter. During the past 13 weeks, all of the major market indices rose with the Dow Jones Industrial and the S&P 500 up 2.3-2.4% for the quarter, while the Nasdaq Composite climbed more than 4.5%. Aside from those gains for the quarter, all of the major indices also have in common that they closed the quarter off their highs that were established in late May. Those three stock market indices closed the quarter down 2.8-3.8% from those highs. 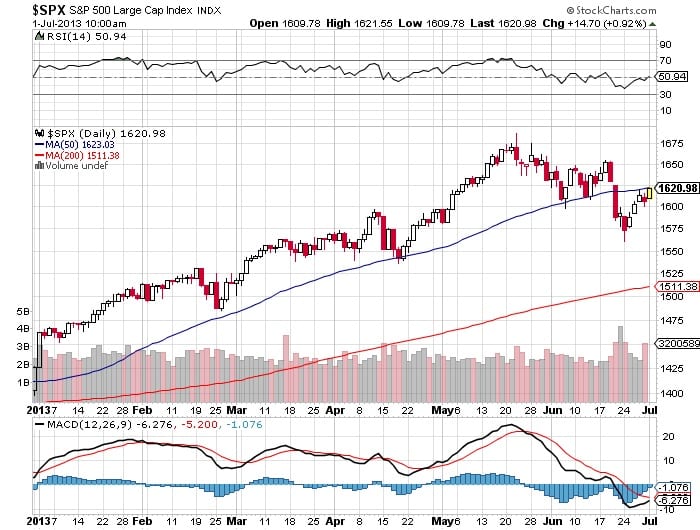 The one-two punch that pulled the stock market back during the last half of the quarter was fueled by comments from Fed Chairman Ben Bernanke about potential stimulus tapering. I continue to be of the mind that the market misconstrued Bernanke’s comments and missed his explaining the scenario under which the Fed would tighten. With the third and final estimate of the first quarter’s gross domestic product (GDP) revised down to 1.8% from the prior reading of 2.4%, it seems fairly evident the Fed will not be backing down from its stimulative efforts near-term.

One big drag on growth in the first quarter was a sharp downward revision in the growth rate of consumer spending to 2.6% annualized from an earlier estimate of 3.4%. With gas prices retreating during the quarter, one of the larger factors hitting consumer spending was the payroll tax hike that went into effect this past January. One criticism we have heard is the lack of end demand from consumers that has kept businesses on the sidelines in terms of investing and hiring. Data from the Bureau of Economic Analysis showed that business investment grew only 0.4% in the first quarter — hardly a number to get excited about.

Uh-oh, manufacturing orders are down, but prices are up. For those that need more convincing that the Fed is not likely to ratchet down its bond buying, last week’s economic figures point to a still tepid economy ahead, certainly not the kind that is moving from third gear into fourth gear. Core capital goods orders, excluding defense and aircraft, rose 1.1% in May, on par with April and March. June production and orders figures fell for the month of June in the Chicago PMI report, while prices paid jumped. Similar findings were had in both the June Empire State Manufacturing Survey and Kansas City Manufacturing Survey, while the June Texas Manufacturing Outlook Survey showed improving orders, but also rising prices.

Again, there is no real sign that the domestic economy is set to pick up steam. Add to that situation the slower manufacturing in Asia per last night’s National Bureau of Statistics and the China Federation of Logistics and Purchasing. Separately, HSBC’s findings show that China’s factory output contracted for a second straight month, to a nine-month low, in June. All of this tells me that “Big Ben” Bernanke and the Fed will continue to stimulate our economy for at least the next several months.

Can the consumer keep spending? As I pointed out in several of the data streams above, prices are rising. I’ll be keeping an eye on the flow through of those rising prices to see if companies try to pass those higher costs on to you and me. It will be difficult for companies to do so today when so many Americans continue to struggle. Hammering home that point was a new survey released by Bankrate.com last week that found that 75% of Americans are living paycheck-to-paycheck, with little to no emergency savings. That, too, was confirmed by online lender CashNetUSA, which found that 22% of the 1,000 people it recently surveyed had less than $100 in savings to cover an emergency, while 46% had less than $800.

Not only is that situation dire, but it confirms that the cash-strapped consumer is alive and well. It also means that consumers may not be able to digest much in the way of price increases. Keep in mind that gas prices have drifted lower of late. According to the Energy Information Administration, gas prices are now $0.14 per gallon higher than this time last year. Those are some of the reasons why I continue to favor companies like McCormick & Co. (MKC) during the coming months rather than casual dining stocks, like Red Robin Gourmet (RRGB), Darden (DRI) and others.

A short week ahead, but some big data to watch. While the coming week is a short one due to the July 4th holiday when U.S. stock markets will be closed, we’ll be getting data that I’ll use to confirm those regional readings. In particular, today the June ISM Manufacturing Index showed a slight rebound from an unexpected “contraction” in May. The index of national factory activity in June rose to 50.9, a bit above consensus estimates of 50.5, up from 49.0 in May. A reading of 50 indicates expansion.

We’ll also get the June auto and truck figures this week, as well as the ISM services and a few other reports. One thing to note, because of the holiday this week, weekly initial and continuing jobless claims data will be reported on Wednesday instead of Thursday, when it usually is announced.

Aside from the June ISM Manufacturing report, Friday’s June Employment Report will be dissected to see if citizens are, indeed, returning to the labor force or not. Given the July 4 holiday this Thursday, Friday’s trading could be thinner than usual in the summer and that could exacerbate any market moves that happen should the June Employment Report wow to the upside or fall short of expectations. As always, we’ll get the ADP Employment Report and the Challenger Job Cuts Report ahead of Friday, and I’d expect pundits to tighten up their Friday figures based on those results.

Candidly, I don’t expect much that will tell us the second quarter was much stronger than the first. With some uncertainties ahead, I suspect that companies will once again take a cautious tone when they start to report their quarterly results soon after the July 4th holiday.

Have a great 4th with your family, friends and loved one.

Be sure to visit my website, www.ChrisVersace.com, where you can check out not only PowerTrend Profits, my investment newsletter, but also ETF PowerTrader and PowerTalk. Also, I’d encourage you to follow me on Twitter @_ChrisVersace.