Doug Fabian is known for his expert knowledge of ETFs, bear funds and enhanced index funds to profit in any market climate.
share on:FacebookTwitter

The saga continues in the bond markets, with the sector moving completely out of whack since the Fed’s talk about tapering its easy-money policies entered the global investing consciousness. Recall that in last week’s Making Money Alert, we discussed the liquidation cycle in global equities, emerging markets and Treasury bonds. This week, I thought it would be helpful to take a look at one segment of the bond market that’s really getting slammed, and that’s municipal bonds.

Take a look at the chart here of the iShares S&P National Municipal Bond Fund (MUB). As you can see, the fund staged a pernicious sell-off from mid-May through late-June that took it down nearly 9%. Since the worst of the selling, the fund has staged a comeback, and that’s largely due to last week’s bevy of Fed officials backing away from Bernanke’s remarks about monetary policy tapering. 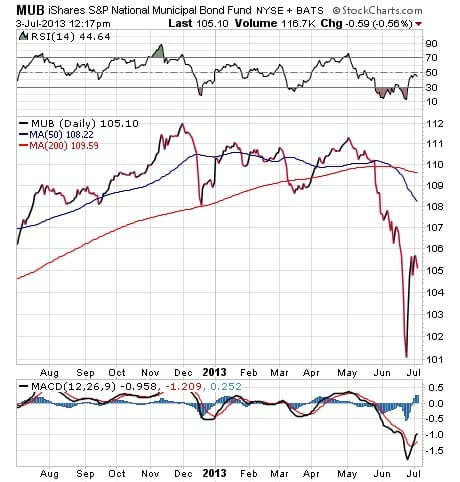 As for long-term Treasury bonds, they too have staged a rebound since their late-May through late-June plunge. Take a look at the chart here of the iShares Barclays 20+ Year Treasury Bond (TLT). The fund also plunged about 9% as a result of the market’s taper tantrum. But of late, we’ve seen a decent rebound. 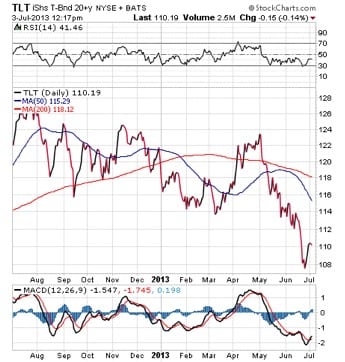 So, does the latest action in bonds mean the end of the liquidation cycle for the segment?

That’s an open question that will remain unanswered until more data comes in and gives the Fed direction as to which way to go on the tapering narrative. The first of these data points will hit the wire Friday morning, as the all-important June employment report arrives.

Even though trading volume will be light due to the holiday, I expect there could be some fireworks on Wall Street if we get something other than what traders expect from jobs. For example, if the jobs data is weaker than anticipated, it could send the taper narrative into the abyss, and that could propel bonds and stocks higher. If, however, job strength is better than expected, we actually could see stocks and bonds falter due to fears that the Fed will move in to taper.

Yes, things are out of whack these days, as good news is bad news and bad news is good news. And though it always has been somewhat like that on Wall Street, I don’t recall a time when things have been so skewed due to the Fed.

Finally, I must say that it has been quite a year so far for the market. In the first half of 2013, stocks staged an incredible bull move that I don’t think anybody thought would take place. Sure, there has been a lot of selling in emerging markets around the globe, and there has been a lot of downside in markets such as China. Gold and other commodities also have struggled mightily. Yet when it comes to domestic stocks such as those in the S&P 500 Index, it’s been a very good year. 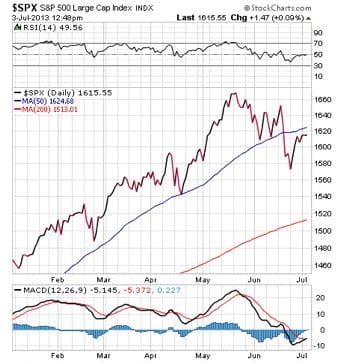 The chart here of SPX for the past six months shows the strength in the index so far in 2013. Year to date, SPX still is up more than 10%. However, the recent selling that has pushed the fund below the short-term, 50-day moving average has taken some of the wind out of the bull’s sails.

How the rest of the year’s trading action sets up, I suspect, largely will be determined on Friday by the June employment data and the market’s reaction to said numbers. So, while you enjoy your Fourth of July festivities tomorrow, be sure to check out all the action in the markets Friday morning, as the fireworks in the trading pits might be even brighter than they were the night before.

Exclusive  Some Kind of Wonderful

“Thousands of young men willing to die for the truth. But few who are willing to study for five years what the truth is.”

The genius novelist reminds us of the courage it takes to dig down and get to the root of reality. This may not be very comfortable at times, but until you do it, your best self will never fully be realized. Oh, and big thanks to my friend and colleague Nicholas Vardy for providing this week’s quote.

Exclusive  Invest in a Variety of Banks with This ETF