PowerTrend Brief: Get Ready, the 2013 Investor’s Half-Time Show is Over

I hope you, your family, friends and loved ones had an enjoyable Fourth of July. I also hope that you enjoyed what I call the investor’s half-time show. A few days ago, we left the first half of the investing year behind. I hope you enjoyed the holiday week because starting this week, the second half of the year will kick into high gear. I’m, of course, referring to the start of the latest iteration of corporate earnings that will kick off later today with Alcoa’s (AA) quarterly results.

While one company’s results do not make a trend, Alcoa is closely watched, given not only the nature of its business, but also because it is a component of the S&P 500. Because of that, Wall Street and I will be watching to see if expectations for slower earnings growth in the back half of 2013 are well founded or not.

Slowing earnings growth and the rising 10-year treasury yield. Already, the second quarter is shaping up to be the slowest one in terms of earnings growth that we’ve seen in some time. After delivering year-over-year earnings growth of 6.2% in 4Q 2012 and 5.4% in 1Q 2013, current expectations call for the S&P 500 to deliver only 2.9% earnings growth for 2Q 2013. That’s year-over-year revenue growth of 1.6%, according to analysts polled by Thomson Reuters. Supporting that view of slower growth, 97 companies in the S&P 500 issued negative June quarter outlooks, compared to 15 positive views. That ratio is horrible. If it continues, it could be the worst earnings quarter since 2001.

What concerns me is the potential combination of even slower earnings growth ahead and the continued rise in the 10-year treasury yield. Should those two occur together, the combination could limit upside in the stock market in the back half of 2013. 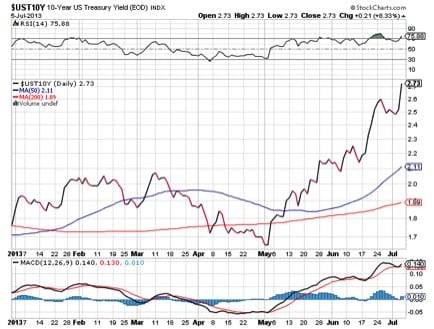 That situation means you and I will have to pay close attention to the details that emerge during the coming weeks to figure out the next direction of the market. Aside from corporate earnings, there are several other key indicators worth noting, like Dr. Copper. Given the number of uses for copper, the metal is viewed as a key indicator of global growth. Looking at the year-to-date trend in copper spot prices, it suggests that near-term growth will remain tepid. 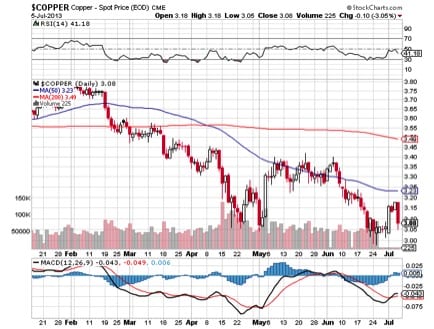 June Employment Report — not so good below the headline. While a number of talking heads quickly shared their view that Friday’s June Employment Report meant stimulus tapering is on track for September, I say the details don’t really suggest that. On the one hand, nonfarm payrolls of 195,000 were stronger than expected, and, yes, the figures for the last few months were revised higher. At the same time, however, the broader and far-better measure of the true unemployment — the U6 employment rate — rose to 14.3% in June from 13.8% in May. That’s the highest it has been since February!

Moreover, the bulk of the June jobs growth was in the leisure and hospitality category. Drilling down into the report even further, it was employment growth in food services and drinking places that drove most of the sequential improvement. While it is good to see a better-than-expected jobs report, it looks like a low quality beat given the lower wage and seasonal nature of those jobs.

PowerTrends — always finding the bull market that is out there. I would point out to you that the June Employment Report also served to confirm The Cash Strapped Consumer aspect of my Rise and Fall of the Middle Class PowerTrend. The report found that year-over-year average hourly earnings rose 2.2% in June, and the average workweek was unchanged compared to that in May. Simple math shows workers are taking home a little more money than last year. Despite the recent decline in gas prices, consumers are still paying 4.2% more for gas at the pump than last year.

With May producer price indices up almost entirely due to higher food and energy costs, you could start to see the hard-earned dollars you are making buy far less in the coming months. That paints a favorable picture for subscribers of PowerTrend Profits, given our holdings in McCormick & Co. (MKC) and Mondelez International (MDLZ). One of the great aspects about investing with PowerTrends is that no matter what the environment, subscribers are able to invest in those companies poised to benefit the most. 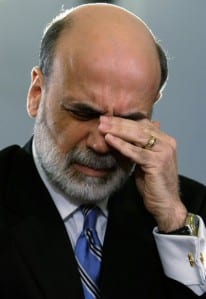 Watching Wednesday’s FOMC Minutes. With all of this going on, I will be closely watching this Wednesday’s Federal Open Market Committee (FOMC) minutes from the Fed’s June meeting. Remember that many jumped the gun following Fed Chairman Ben Bernanke’s recent comments that described the scenario under which the Fed would taper. Since those comments by Bernanke, several from the Fed have spoken up, saying that tapering is not necessarily imminent. For example, William Dudley, the president of the New York Fed, shared that tapering is not “hardwired” and that the data would have to continue to improve between now and September.

In my view, the FOMC minutes should offer greater insight into what the Fed is thinking in terms of tapering, and that will help you and me understand the vector of the stock market in the coming months.

Be sure to visit my website, www.ChrisVersace.com, where you can check out not only PowerTrend Profits, my investment newsletter, but also ETF PowerTrader and PowerTalk. Also, I’d encourage you to follow me on Twitter @_ChrisVersace.