Making Money Alert: Interest Rates — Up, Up and Away!

The biggest news in the market right now is the rise in long-term interest rates, i.e. the spike we’ve seen in long-term Treasury bond yields.

Last Friday, interest rates, as measured by the yield on the 10-Year Treasury note, spiked to 2.71%, the highest level for this key metric in nearly two years. That spike was largely due to a better-than-expected June employment report, which showed that employers added 195,000 net new jobs during the month.

The number was solidly above the consensus estimate for 165,000 new jobs but, more importantly, it takes the Federal Reserve one step closer to its proposed “tapering” of the bond buying scheme known as quantitative easing. Indeed, ever since the taper talk began on May 22, the equity, bond and commodities markets all have been in a state of flux.

As you likely know, that’s the day that we heard testimony before Congress from Fed Chairman Ben Bernanke, and it is where we first heard the term “tapering” move onto Wall Street. Since then, professional and individual traders and investors throughout the globe have been watching and reacting to the potential of an alteration of the central bank’s $85 billion per month bond buying program.

Now, most of the time on Wall Street, the numbers don’t lie. From the close on May 21 through the most-recent low on June 24, the S&P 500 Index corrected 5.76%. And while there has been a modest rebound in the broad measure of the domestic equity market since that June low, stocks still are down since the taper talk shook the market’s collective confidence. 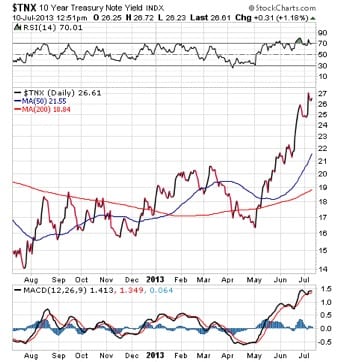 From now until September, all eyes will be on the various data points that come in, with the primary metrics of concern being jobs, data on manufacturing, consumer confidence, and, of course, inflation. I suspect that because we have some time before the September Fed meeting, stocks are likely to bounce around attempting to find direction through the notoriously slow summer months. I also expect traders to react to any hint of a change in Fed policy going forward, and that could mean more selling in stocks, more selling in commodities — and more rising interest rates.

“Rates surged on Friday after a stronger-than-expected jobs report and upward revisions to prior months’ unemployment levels,” said Erin Lantz, director of Zillow Mortgage Marketplace. “This week, rate movement will depend on whether Wednesday’s release of the Federal Open Market Committee meeting minutes and Fed Chairman Ben Bernanke’s speech reinforce or depress market expectations of a September start of easing federal stimulus.”

I think this latter explanation from Lantz is accurate, as all eyes will be on the FOMC minutes and Mr. Bernanke’s scheduled speech late Wednesday.

What I want you to keep an eye on here is the action on the 10-Year Treasury note. If the yield on this key metric continues to climb, we are going to see mortgage rates (which are loosely tied to this metric) rise. That rise in rates could take a big bite out of the housing market’s recovery, and that could take the fledgling gains we’ve seen in gross domestic product (GDP) and jobs down with it.

The bottom line here is that the Fed is walking a tightrope with its taper talk and the potential that posturing has to kill the recovery. What’s going to happen next? Well, keep your eye on the 10-Year note yield — as it will be the key to answering this crucial question.

“There are all kinds of stupid people that annoy me but what annoys me most is a lazy argument.”

The late writer certainly was a controversial figure, but here I think this bit of wisdom is anything but controversial. No matter what side of an issue you’re on, don’t let your opinion be formed by a lazy argument. You owe it to yourself, and to reality, to be better than that.