Who Won the Read Book Award at FreedomFest?

FreedomFest, “the world’s largest gathering of free minds,” gave out the award at this morning’s opening ceremonies in honor of Gilder’s new work “Knowledge and Power” (published by Regnery). This annual award is granted to the “libertarian book of the year” which best advances the principles of liberty. 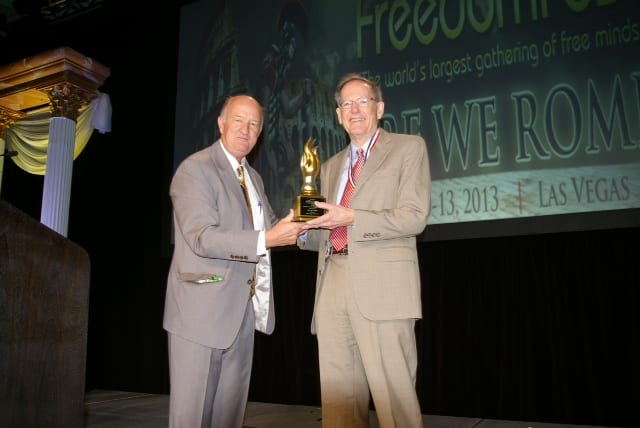 Rich Karlgaard, publisher of Forbes magazine, calls the book a “revolutionary” work, perhaps the most important book of the 21st century.

In presenting the award, I stated that “Knowledge and Power” is a revolutionary work in the tradition of Hayek’s famous essay, “The Use of Knowledge in Society,” and Thomas Sowell’s influential book “Knowledge and Decisions.”

Gilder makes the argument that decision-makers must reject the deterministic/mechanistic systems of human behavior and build their policies and economic models on the concepts of “human creativity, free will and the unexpected.”

His entire book is built around his thesis that “the freer an economy is, the more this human diversity of knowledge will be manifested. Capitalism is not chiefly an incentive system but an information system.”

The award also comes with a gift of a one-ounce American eagle gold coin, valued at approximately $1,300.

For those who are not familiar with George Gilder, he is one of the original pillars of supply-side economics and author of several bestsellers, including “Sexual Suicide,” “The Spirit of Enterprise,” “Microcosm” and the “Israel Test.” His 1981 bestseller, “Wealth and Poverty,” had a major influence on the Reagan Administration in the 1980s. He is editor of the Gilder Technology Report and a senior fellow at Seattle’s Discovery Institute, where he directs Discovery’s program on high technology and democracy. Gilder is a frequent writer for major business publications, including Forbes magazine and the Wall Street Journal.

To obtain a copy of George Gilder’s book, “Knowledge and Power,” go to this link on Amazon.com. The book recently was #1 on Amazon’s business/economics section.

The Read Book Award is named after Leonard E. Read, the founder of the Foundation for Economic Education (FEE), the first modern free-market think tank in the United States, and its monthly publication The Freeman. Mr. Read (1898-1983) is the author of hundreds of essays, his most famous being “I, Pencil.” He was a voracious reader, and his FEE library contained thousands of books. For more information on the Foundation for Economic Education, go to ww.fee.org. (Note: This award is not affiliated with FEE, and the selection of the Read Book Award is exclusively a decision made by FreedomFest.)

FreedomFest is the world’s largest gathering of free minds, and the conference meets annually every July in Las Vegas. It is an intellectual feast in the entertainment capital of the world. More than 2,200 people came to learn, network, debate and celebrate liberty and the theme “Are We Rome?” For more information, go to http://www.freedomfest.com.

Next year’s FreedomFest is July 9-12, 2014, at Caesars Palace, Las Vegas, where the theme will be “Is Big Brother Here?”

You Blew It! Disney Undermines an American Hero

Since my childhood, I have been a fan of the Lone Ranger, a man who stood for honesty and justice in the American West. I even played the role of the Lone Ranger at a few investment conferences in the 1990s. Once, Jim Blanchard and I arranged for silver bullets to be made and distributed to attendees of the New Orleans conference.

Now comes the $300 million Disney extravaganza of “The Lone Ranger,” a long-time project of actor Johnny Depp. What a disaster! Not only is it way too long (over 2 1/2 hours), but the screenwriters managed to mangle almost everything that made the Lone Ranger an icon in American folklore. Only a few characteristics of the original remain in place in this boondoggle — the Lone Ranger doesn’t like guns (he never kills outlaws) and the playing of the William Tell Overture.

The Disney production engages in excessive violence, including a sadistic scene where the principal outlaw eats the heart of the Lone Ranger’s brother, but makes all “white men” bad, all Indians good, and one of the executives of the Union Pacific an evil businessman. The film makes up bad history about the Continental Railroad, criticizes traditional Christian faith and American capitalism, and makes the Lone Ranger himself into a buffoon.

Walt Disney must be rolling over in his grave.

The only silver lining is that Disney is losing a bundle on this film.

San Francisco Money Show, Aug. 15-17, San Francisco Marriott Marquis: Join me and all the other Eagle editors (Doug Fabian, Nicholas Vardy and Chris Versace), plus William O’Neil (founder of Investor’s Business Daily), Frank Trotter (Everbank), Matt Schifrin (Forbes), John Bollinger, Chuck Butler and many others. There is no charge for this conference, but you do need to register. Call 1-800-970-4355, and mention code #031733.