Stocks just want to go higher, and it doesn’t matter if the Fed is going to peel back quantitative easing, or if GDP growth in the second quarter is going to be a pathetic 1%. Buyers just keep buying, and that means stocks have recovered all of what they lost during the “taper” scare in June.

In fact, the resilience of this bull market reminds me a lot of a viral YouTube video about a honey badger. In the video, the narrator describes the tenacity and devil-may-care-attitude possessed by the pugnacious and fearless honey badger with the constant refrain that, “Honey badger don’t care, honey badger don’t give a s**t.”

Well, so far in 2013, the bulls are just taking their cue from the honey badger — and that means they don’t care about what’s happening around them; they are going to bid stocks higher.

The chart here of the S&P 500 index tells the tale of this resilient, honey badger-like market during the past 12 months. 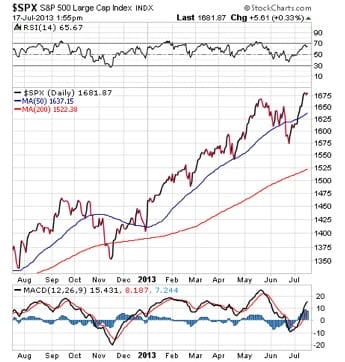 As you can see, despite a pre-November presidential election sell-off, and despite a sell-off due to Fed Chairman Ben Bernanke’s talk about tapering easy-money policies in May and June, the broad measure of the domestic equity market has soared about 25% during the past year.

Of course, even the most resilient honey badger doesn’t live forever, and that means there will be an end — or at least a substantive “reboot” — of this market at some point. When will this happen? Well, we got a taste of that reboot mid-May through mid-June, when stocks pulled back nearly 6% from the May high through the June low. I anticipate this happening again sometime this year, but when this situation takes place is hard to see going forward.

Today, the bulls got more of the red meat they were looking for from Ben Bernanke. In his prepared testimony to Congress on Wednesday, the Fed chairman wrote, “The risks remain that tight fiscal policy will restrain economic growth over the next few quarters by more than we currently expect, or that the debate concerning other fiscal policy issues, such as the status of the debt ceiling, will evolve in a way that could hamper the recovery. More generally, with the recovery still proceeding at only a moderate pace, the economy remains vulnerable to unanticipated shocks, including the possibility that global economic growth may be slower than currently anticipated.”

The translation here is that the Fed now appears to have adopted a greater focus on the downside risks to the economy than in the June Federal Open Market Committee (FOMC) minutes. So, does this mean that “tapering” won’t start in September? Perhaps, but even if tapering starts, it is likely to be far less aggressive than traders feared when the June minutes came out.

Given the Bernanke testimony, and in the absence of some major downside catalyst, look for the honey badger stock market to just not care.

Don’t Let the Uncertainty Turn You Around

–Jackson Browne, “For A Dancer”

The incredible singer/songwriter is well known for the beauty of his poetic lyrics. In this song, he doesn’t disappoint. He also gives us a bit of wisdom that applies to everything in life, including investing, and that wisdom is to not allow your uncertainty to turn you around.