Consumers Spending like U.S. Economy’s Recovering Nicely; Detroit is Not Alone in Dire Straits; Japanese Vote to Push Ahead with Economic Reforms

Investors hear a different opinion each week as to whether the U.S. economy actually is recovering, or merely being propped up by the Fed’s stimulus and interest rate programs. This week, the pendulum is swinging back to the recovery side, according to those in the hospitality industry. In fact, the industry just set a record by hitting the 14.2-million mark in terms of total leisure or hospitality jobs. And that’s actually a number investors can take to the bank, especially if they’re holding shares of Starbucks, Dunkin’ Brands or Sonic, as these companies’ share prices have risen 28 percent, 29 percent and 52 percent, respectively, year to date. Of course, who’s to say what next week will bring? But for now, enjoy the ride.

Detroit is Not Alone in Dire Straits (Bloomberg)

While Detroit’s Chapter 9 bankruptcy is the largest municipality filing to date, other cities are struggling, too. All around the country, cities large and small suffer from depressed property tax revenue, under-funded government pensions and cuts to health-care benefits. In fact, the costs associated with funding pensions and health-care coverage outweigh the assets of the countries’ 61 largest cities by some $217 billion, according to the Pew Charitable Trusts. For investors who still hold municipal bonds within their investment portfolios, the news doesn’t get much worse. And it won’t get better, any time soon. Perhaps they can sell those bonds for scrap…

Japanese Vote to Push Ahead with Economic Reforms (AP)

Japan’s elections Sunday represented a clear victory for Prime Minister Shinzo Abe, whose party won a majority in the country’s upper house of parliament. With that victory comes a continued effort to establish economic reforms. For investors who’ve returned to Japan, the election outcome most likely means a continuation of the yen’s downhill slide and strength in the equity markets. And that’s exactly what we see in the Far East’s market performance today, as bourses in Singapore, Seoul, Taipai and Sydney all showed slight gains. Chinese stocks fell, but most analysts attribute the loss to last week’s slower economic growth data than the Japanese election outcome. So, if you are investing in Japan, go ahead and chalk up the election results as a win for yourself, as well.

Exclusive  My Run-In With Paul Krugman, Again!
share on: FacebookTwitter 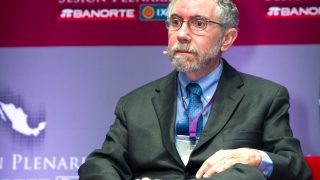 Who Was that Masked Economist?

Are You FED Up with Chairman Powell?

Take This Poll: Who Will Save the Republic?

share on:
Exclusive  How Do Recessions Impact Supply Chains?