My Trip along the Berlin Wall

It was just over 26 years ago, on June 12, 1987, when President Ronald Reagan stood in front of Berlin’s Brandenburg Gate and delivered this now famous challenge to the Soviet Union’s leader Mikhail Gorbachev.

Only two years later, on November 9, 1989, after nearly three decades, the Berlin Wall came down. The “Iron Curtain” already had been lifted in the summer as East Germans flooded to the West through Hungary. Not long afterward, the Soviet Union itself crumbled as well.

While most of my friends are off sunning themselves in exotic locales for their summer vacation, I am on my annual historic bike tour. This week, I am cycling the 100 or so miles alongside the Berlin Wall Trail, which runs along the road used by East German border guards to keep their citizens from escaping to West Berlin — the U.S., British and French sectors. 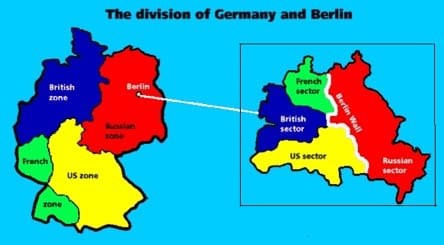 As you can see on the map above, before the Berlin Wall fell, West Berlin was an island city far behind the Iron Curtain.

Before the East Germans raised the Berlin Wall in 1961, 3.5 million East Germans had crossed from East Berlin into West Berlin, from where they could then travel to West Germany and other Western European countries.

Berlin’s Brief but Glorious Past

With a population of 3.3 million people, Berlin is Germany’s largest city and the seventh largest in the European Union. It is also Europe’s fastest-changing and fastest-growing city, still transforming itself at a furious pace more than 23 years since the fall of the Berlin Wall.

Turn back the clock 100 years to the eve of the outbreak of World War I in 1914 and you’d find that if London was Europe’s New York, then Berlin was Europe’s Chicago — a fast-growing, relative upstart compared to where the real action was. And Berlin always had an upstart’s chip on its shoulder, with even Kaiser Wilhelm II asking in 1892: “Berlin is a great city, a world city (perhaps?).”

But within a few decades of the German unification in 1871, Berlin had become a cutting-edge global leader in industry and science. In 1901, the first Nobel Prize for medicine was given to a Berliner, Emil von Behring, for his serum against diphtheria. Einstein’s general theory of relativity, Planck’s quantum mechanics and Heisenberg’s uncertainty principle all came out of Berlin. So did the spectroscope, the discovery of radio waves and a cure for syphilis. By the 1930s, Berlin’s university and its medical faculty won 29 Nobel prizes. Of course, many of these academics were Jewish, later chased out by the Nazis. That’s why the next generation of Nobel prizes went to the United States in a migration dubbed by some historians as “Hitler’s greatest gift.”

Today, Berlin does not have the global gravitas of London or the romantic attractions of Paris. It is more like a homely young student who charms you eventually with her earnest intelligence.

Berlin’s unimpressive, jumbled architecture is closely linked to Germany’s history in the 20th century. Each of the national governments based in Berlin — the 1871 German Empire, the Weimar Republic, Nazi Germany, East Germany and now the reunified Germany — implemented ambitious construction programs. Each program put its own idiosyncratic stamp on the city’s architecture.

Most recently, Berlin was destroyed by bombing raids during World War II. Many of its remaining buildings were demolished in the 1950s and 1960s in both West and East Berlin.

You have to look long and hard to find any real hard evidence of Hitler’s “1,000 year Reich” today. The sites of Goebbels’ Propaganda Ministry; Goering’s Air Ministry (Luftwaffe Headquarters); and Himmler’s SS and Gestapo (secret police) headquarters have been turned into anonymous, gravel covered plots. The site of Hitler’s bunker and suicide lies unmarked, 40 feet below ground in an anonymous parking lot.

For my first two nights, I intentionally chose a hotel in East Berlin just to see how this divided city had integrated since the fall of the Berlin Wall. Along the actual former Berlin Wall, it is hard to tell East from West. But go in a bit farther into the East, and the architecture is still vintage Eastern Europe block housing — though, granted, it is much cleaned up.

My verdict? Berlin is like Zurich, Switzerland, in the West, but like Warsaw, Poland, in the East.

The rate of new construction in Berlin is astonishing. Cranes are literally everywhere you look. The Potsdamer Platz — once the world’s largest construction site — is an entire new center of Berlin built from scratch after 1995, once the infamous wall came down.

Growing at twice the rate of the rest of Germany, Berlin is one of the top 10 most popular investment locations in Europe. Berlin start-ups are relocating their headquarters to the German capital. I’ve heard Berlin called the most “American” of cities, as people from all over Germany and Europe come to live and work here, and they care little about your past.

Now here are some of my personal, and politically incorrect, impressions of Berlin and Berliners.

Yet, I have yet to see even a single plaque dedicated to the Western powers — the United States, Britain and France — that kept West Berlin a free city for over 45 years and allowed 3.5 million Easterners to escape to their freedom.
There is, however, both a McDonald’s and a Starbucks right at the infamous former East-West border crossing, Checkpoint Charlie.

If that contrast isn’t the ultimate example of the United States’ “soft power,” I don’t know what is…