The markets have made a decided move to the upside since late June, but during the past couple of days we’ve seen a bit of a summer stall. Trading volumes have been relatively light, and the markets now are keying on the bevy of earnings reports that have come in.

Now that we are in the heart of earnings season, I expect the markets to tread a bit of water here while we wait for additional data. Of course, the big tailwind for stocks here, as it has been for several years, is the Federal Reserve. The quantitative easing (QE) “taper” talk now seems to be on the back burner, and traders are counting on the fact that the Fed will be there with the easy money whenever the data gets soft. And even if the Fed moves to begin pulling back the reins on its bond buying scheme, the market is convinced that this won’t be significant enough to derail the monetary gravy train. 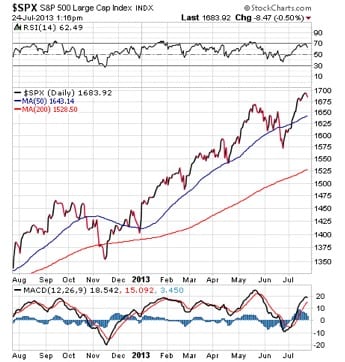 Now, when it comes to international markets, and particularly emerging markets, we see that there’s been a lot more volatility than there has been here at home. The chart below of the iShares MSCI Emerging Markets (EEM) shows the big comeback in the sector since it fell to its June lows. EEM now is back above its 50-day moving average. 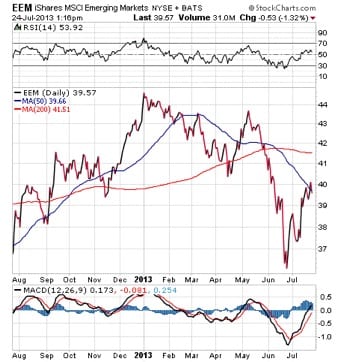 The catalyst for this sector was the recent news out of China that the policymakers will do whatever it takes to make sure economic growth stays above 7% for the year. While I am not sure if China’s leaders can make good on this promise, I do know that they will move to inject more stimulus into the system in an attempt to shore up the perception that China’s growth is contracting too fast.

I suspect this situation would be bullish for EEM going forward, so keep an eye on this sector in the weeks to come.

The big economic/political news story last week was Detroit’s filing for bankruptcy. The debt debacle in one of America’s largest cities is very sad, but it’s also not that surprising.

It’s also not likely to be the only big city that will file for bankruptcy.

So far, the damage financially has been relatively isolated to actual Detroit municipal bond holders. Still, there has been a big sell-off in municipal bond funds due in part to Detroit contagion fears. 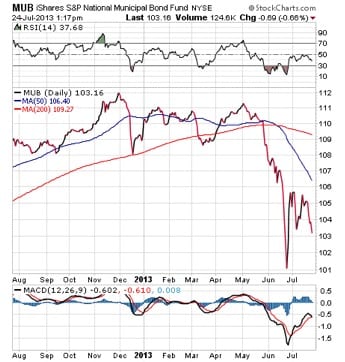 The chart here of the iShares S&P National Municipal Bond Fund (MUB) shows the selling that has occurred in the sector of late. That selling ramped up since last Friday, when the Detroit bankruptcy was actually filed. Of course, the selling in munis also ramped up due to the Fed’s taper talk in late May.

If you own municipal bonds right now, I am sure you are uncomfortable and feeling uncertain. Before you take any action, I recommend that you do an inventory of all of your bond holdings to see how much muni exposure you actually have. If you have significant holdings in the space, consider paring those holdings down to protect yourself.

On Freedom and Benefit

“Freedom granted only when it is known beforehand that its effects will be beneficial is not freedom.”

The brilliant economist reminds us that freedom, in some of its forms, can also mean the freedom to make poor decisions or to be destructive to oneself or society. This doesn’t negate the idea of freedom, but it does mean that with freedom comes the responsibility to freely choose good actions. Remember that thought the next time you make an important life choice.

P.S. San Francisco Money Show, Aug. 15-17, San Francisco Marriott Marquis: Join me and all the other Eagle editors (Doug Fabian, Nicholas Vardy and Chris Versace), plus William O’Neil (founder of Investor’s Business Daily), Frank Trotter (Everbank), Matt Schifrin (Forbes), John Bollinger, Chuck Butler and many others. There is no charge for this conference, but you do need to register. Call 1-800-970-4355, and mention code #031734.

Good Data Propels Europe (CNBC) Better-than-expected purchasing managers' index (PMI) data for the euro zone led to further gains for European stocks and boosted the Euro to a one-month high. "Encouraging news," said Howard Archer, an economist at IHS Global Insight. "With the euro zone purchasing managers surveys supportive to the view that the euro zone has finally stopped contracting and could very well eke out marginal growth over the second