Biotechnology is a high-octane sector where fortunes are made and lost quickly.

That’s because investing in biotech stocks is a lot like investing in small-cap mining stocks or Silicon Valley start-ups. You have to kiss a lot of investment frogs before you find your “Prince” Google or Facebook.

Biotechnology has had four massive, triple-digit percentage gain bull markets since the 1980s. The two biggest ones were, first, in the early 1990s, when biotech stocks soared almost 10-fold. The second came later during the dot-com boom, when the Nasdaq Biotechnology Index rose 457% from the end of August 1998 to the end of February 2000. But having been burned by dozens of investments that “went south,” investors never regained the enthusiasm for biotech they once had in the 1990s.

That said, biotechnology has already clocked some impressive gains this year, with the Nasdaq Biotech index up 41.91% year-to-date.

And the biotech sector, as represented by the iShares Nasdaq Biotechnology (IBB), outperformed the S&P 500 over the past five years by just about three to one. 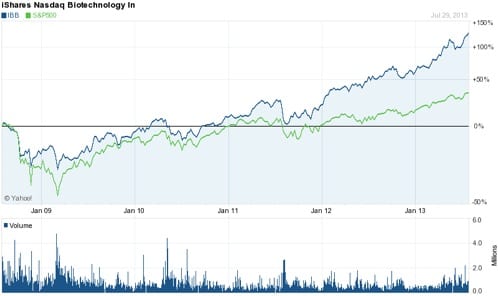 As one investor put it, “If you catch just one biotech bull market in your lifetime, you may never have to work again.”

Biotechnology: Get Ready For Bull Market #5

Big Pharma is saddled by two problems: the rise of generics and finding new drugs.

First, since the mid-1980s, generics have been able to move into Big Pharma’s territory once patents expire. Today, Big Pharma has only about 20 years to earn as much as it can before it is undercut by generic firms.

Second, first-generation medicines, such as antibiotics and beta-blockers to treat high blood pressure, were the low-hanging fruit of the industry. Diseases of the young — like polio — were relatively easy to defeat. But diseases of old age — like cancer and heart problems — are a much tougher and a more expensive nut to crack.

New products for an aging baby-boomer population and expansion into emerging markets mean that the sector is poised for fast growth for the foreseeable future.

Here are three reasons why I think biotech is at the start of if its fifth massive, triple-digit percentage bull market.

The strategy of Big Pharma is being driven by one fundamental dynamic: it’s much cheaper for a large company to acquire a potential “blockbuster” through a buyout rather than spend years on research and plowing through Food and Drug Administration (FDA) bureaucracy. And these takeovers of smaller biotech stocks — are often at huge premiums to existing stock prices.

Biotech companies often invest heavily in research and development of products. But like the portfolio of a venture capitalist in Silicon Valley, more drugs end up being “Pets.com” than the next “Google.” That also means that investors rely on a few “home-run” products to make money. In July 2009, Human Genome Sciences surged more than 450% in a week after its lupus drug, Benlysta, showed late-stage success in a clinical trial.

Patent protection and intellectual property rights are at the core of the biotech industry. Any change in the laws could change the outlook for the entire industry overnight. Regulators are also imposing ever more strict, and costly, testing procedures. Today, it takes 15 years to get a drug approved. A global launch costs $2 billion — up from $150 million 20 years ago.

But things may be changing. There also has been an improving trend for FDA first-cycle approvals and a rise in the rate of new drug approvals for rare diseases, helping to boost investor sentiment toward the biotechnology sector.

How to Play the Biotech Investment Game

There are two ways you can play the biotech investment game.

First, focus like a laser in the sector and bet big on a single stock. Then wait for your ship to come in.

Second, buy a diversified exchange-traded fund (ETF) that invests across the range of “lottery tickets.”

Picking one winner is a tough game to play. Biotechnology is an industry of “one hit wonders.” Just because a company has developed one successful biotech drug doesn’t mean it has any better chance of developing another.

That’s why I think the best way to invest in biotech is through a biotechnology ETF, which gives you broad exposure to the sector, while limiting your specific, company risk.

A recent recommendation in my Triple Digit Trader service was a bullish bet on the biotech industry through the ProShares Ultra Nasdaq Biotechnology (BIB). Its performance corresponds to twice (2x) the daily performance of the underlying Nasdaq Biotechnology Index. BIB holds stakes in 10 of the biggest biotech companies. Its top three holdings — Gilead Sciences Inc. (GILD), Regeneron Pharmaceuticals, Inc. (REGN) and Amgen Inc. (AMGN) — together account about 25% of the fund’s assets. 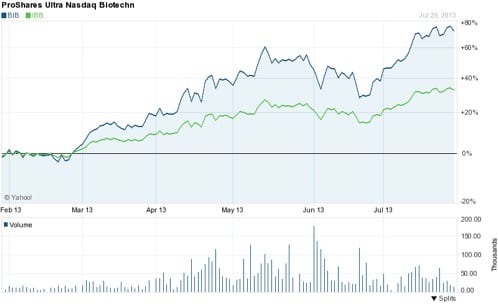 A bet on BIB generated twice the returns of iShares Nasdaq Biotechnology (IBB). That said, this return did come at the price of higher volatility.

Four days later, these same options were up 115.75%, and my subscribers sold the ProShares Ultra Nasdaq Biotechnology (BIB) for a 20% gain soon thereafter.

With its 2x leverage, I believe the ProShares Ultra Nasdaq Biotechnology (BIB) could rally as much as 30% over the coming months.