Danger Ahead: The Billionaires Tax is Just the Beginning

Doug Fabian is known for his expert knowledge of ETFs, bear funds and enhanced index funds to profit in any market climate.
share on:FacebookTwitter

Stocks managed to push higher last week, as many traders now suspect that the Federal Reserve will either keep up the pace, or only slightly alter, its bond buying program at its next Federal Open Market Committee (FOMC) meeting in September. The “dovish” comments from the FOMC last week actually downgraded the outlook for the economy, and that argues favorably for no “tapering” of the current quantitative-easing policies. Of course, the Fed now is “data dependent” and that means any good news on the labor front could change the Fed’s course.

Last Friday’s July jobs report was slightly below expectations in terms of the number of new jobs created, but the unemployment rate did fall to 7.4%. That’s a multi-year low, and it does argue in favor of the Fed taking some kind of tapering action six weeks from now.

The nervousness about tapering has caused stocks to pull back off of their highs this week. During the past four weeks, the Dow basically has been flat. The chart below of the SPDR DJ Industrial Average (DIA) shows the exchange-traded fund (ETF) now trades where it did back in mid-July. 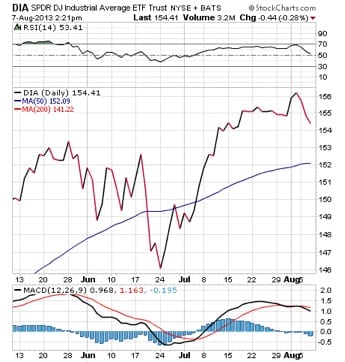 On the bond front, we saw interest rates resume their recent rise, as the yield on the 10-year Treasury Note climbed to nearly 2.60%. If this trend continues, it will mean a greater cost of borrowing money, and that could lead to a real strangulation of economic activity. The Fed doesn’t want this to happen, but will it be able to stop the rising rate train once the tapering begins?

Exclusive  How To Make A Small Fortune 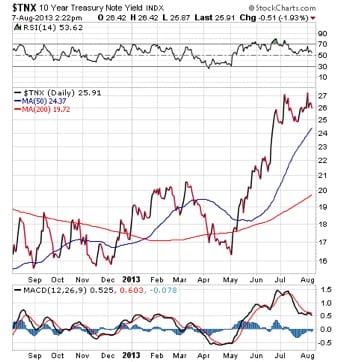 The keys to watch going forward are 1) the decision on tapering, and 2) the move in the 10-year Treasury Note yield.

If Wall Street dumps stocks due to tapering, and if bond yields and the cost of borrowing go much higher, it could mean big trouble for equity investors, bond investors — and the economy as a whole.

On Not Explaining Yourself

“Never explain what you do. It speaks for itself. You only muddle it by talking about it.”

The poet/artist reminds us, in a beautifully concise way, that our actions do indeed speak louder than our words. Remember this the next time you have to make an important choice in life.

P.S. San Francisco Money Show, Aug. 15-17, San Francisco Marriott Marquis: Join me and all of the other Eagle editors (Mark Skousen, Nicholas Vardy and Chris Versace), plus William O’Neil (founder of Investor’s Business Daily), Frank Trotter (Everbank), Matt Schifrin (Forbes), John Bollinger, Chuck Butler and many others. There is no charge for this conference, but you do need to register. Call 1-800-970-4355, and mention code #031734.

S&P 500 Endures Sharpest Decline Since June (Bloomberg) As economists raised their expectations for second quarter growth, U.S. investors grew concerned over an end to quantitative easing and sent the S&P 500 to its lowest level since June 24. The DOW and Nasdaq also declined. “Certainly some of the move is due to increased concern about tapering due to the very str