With both the S&P 500 and Russell 2,000 within two percent of their all time highs, investors may want to pay more attention to the small caps in the second half of 2013, if for no other reason than simple mathematics. You see, the top five positions in the S&P 500 make up 10% of the small-cap index’s total volume, so when they move, the index moves. In the Russell 2,000, on the other hand, the top five positions barely make up one percent of the total index volume, so when the Russell reaches new highs, there are more companies in the mix making that happen. Going into the second half of 2013, I’ll put my money on the contestant with more irons stoking the fire. And you?

It might surprise you to find out the identity of the company with the highest share price on the S&P 500: it’s Priceline.com, at about $938 per share at yesterday’s close. The share price’s movement in 2013 is a big reason why. Year-to-date, Priceline shares are up 50%, and they were trading at a 14-year high before last quarter’s earnings results were announced after the closing bell yesterday. And the company’s 24% earnings gain should propel the share price even higher today. The company reported Q2 2013 profit of $437 million on $1.68 billion in revenue — good for $8.39 a share. It’ll be interesting to see just how high the William Shatner-faced company rises today. Early estimates suggest $1,000 per share.

With U.S. farmers ready to bring in the largest corn crop ever, pumping up global stockpiles to the highest levels in 13 years, hedge funds are pouncing on price shorts. In a Bloomberg survey of 27 analysts, consensus estimates now show that the crop will bring in 53 million bushels more than estimated in July — and 86 million above government estimates for the same month. But it’s not just the U.S. driving this CornFest, as record crops are coming in from locations from Brazil to the Ukraine. The surplus may drop futures estimates by as much as 24 percent. With numbers like that, it’s not hard to see why hedge funds are making large bets that corn prices will fall. The question is, will you make the same bets? 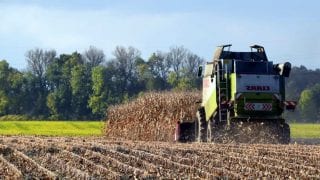 3 of the Best Small-Cap Stocks to Buy Now