Last week saw the U.S. stock market take another dive lower — the S&P 500 closed the week down 2.1% — following the prior week’s 1% dip. Since the Aug. 2 peak, the S&P 500 has fallen just over 3%. There are a number of factors weighing on the market. They include corporate guidance that calls for slower earnings growth ahead, the return of layoffs from the likes of Cisco (CSCO) and AOL (AOL), and renewed concerns about the consumer amid tepid back-to-school spending and weak results from Wal-Mart (WMT), Macy’s (M) and others. We’re also starting to feel the impact of sequestration-related furlough activities. In addition to all of that, the debate over whether or not the Federal Reserve will taper its efforts to stimulate the economy in September is back on, and we soon will face more conversation about the country’s debt limit and a potential government shut down. 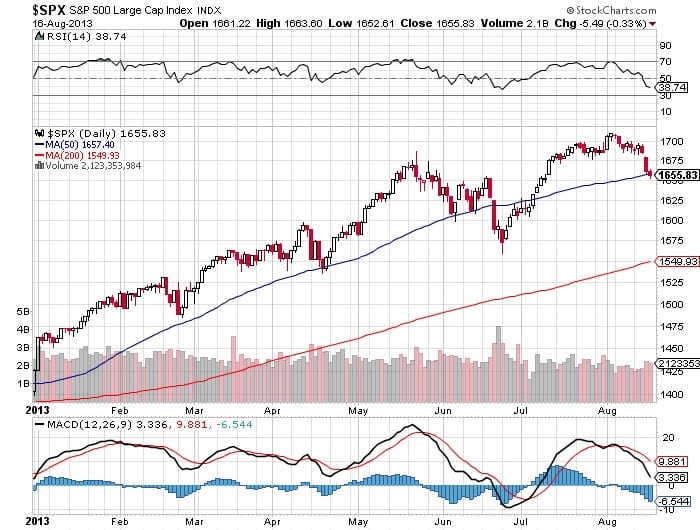 It seems that once again, the level of risk and near-term uncertainty has risen. Couple that situation with the seasonal dip in trading volume during the coming two weeks, and it sets the stage for a pickup in volatility. But that doesn’t mean there isn’t opportunity to be had for patient, long-term investors.

Just this past weekend, the Wall Street Journal ran several articles that speak to PowerTrend opportunities. Let me share them with you:

CNBC — no help at all. The point in mentioning these three examples is that while the overall stock market may be volatile near-term, we have to keep our eyes and ears open for confirming data points, as well as ones that identify a fresh opportunity. Rather than follow the herd or listen to the bombastic chatter on CNBC, I dig deep each week to identify the right data and make sure it’s in the right context. It is hard to have a clear view of your investing mosaic if your view is somewhat askew. One suggestion I have to help improve your investing is to leave CNBC and its sound-bite reporting behind.

Joining me on PowerTalk this week to talk about the economy, the outlook for small business and job creation prospects, as well as the availability of credit, is Jay DesMarteau, head of Small Business, SBA, Restaurant, & Government Banking at TD Bank (TD). Jay and I talk about TD Bank, one of the 10 largest banks in the country, and what it is doing to help small business. We discuss the size and scope of Jay’s team of 150 small business relationship managers and more than 1,300 TD Bank store managers. We also touch on the economy and what Jay and his team are seeing from small business owners. Even though deposits are high, small businesses remain on the sidelines when it comes to taking on new credit, expanding and hiring.

Jay shares some of the challenges facing small business owners, including growing their business, the economic environment and cash flow. In addition to all of that, and talking specifically about what he and his team are seeing in the restaurant, health-care and government markets, Jay also introduces us to specific efforts from TD Bank and the International Franchise Association to help veterans find jobs and start businesses through the SBA Veterans program.

CLICK HERE TO LISTEN TO MY POWERTALK WITH TD BANK (TD)

previous article
‘A gift from the trading Gods…’

It was the toughest week in recent memory for the markets as the Dow Jones tumbled 2.23% and the S&P 500 fell 2.10%. Surprisingly, the MCSI Emerging Markets Index last week was essentially flat, down a mere 0.15%. As a result of the market turbulence, you hit your stop price in Jazz Pharmaceuticals (JAZZ) and locked in a 35% gain on the stock. You also booked a couple of strong option gains, 81.33% and 120%, respectively, on your position in Bank of Ireland (IRE)